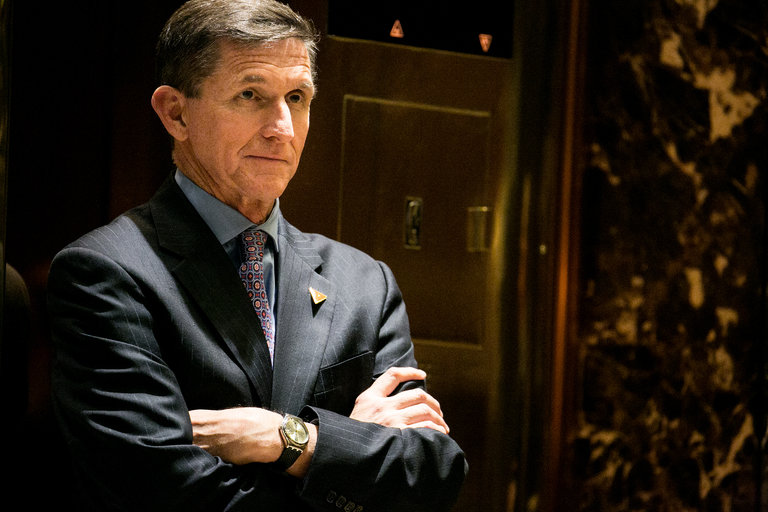 "Michael T. Flynn, the retired general who served a brief month as President Trump’s national security adviser, wants to make a deal. He is seeking immunity from prosecution in exchange for testifying on the Trump campaign’s possible coordination with Russia. Instead of categorically rejecting Mr. Flynn’s offer, as the Senate Intelligence Committee appears to have done today, at least for the moment, both houses of Congress and federal prosecutors should carefully review Flynn’s proffered testimony and the details of the immunity deal and then make a decision.

This is the latest development in a scandal more frightening than Watergate because it involves a foreign adversary attacking the American political system. We need to get to the bottom of it as soon as possible. The president tweeted on Friday morning that he supported Mr. Flynn’s request for immunity. Although we do not think it is proper for Mr. Trump to insert himself into the investigation, we agree on that point, at least.

It is standard for potential targets of an investigation to ask for immunity, and it often takes months or even years for prosecutors to decide whether it’s worth granting it. Prosecutors spend a lot of time developing a case before they ask a judge for an order granting immunity. They have to balance their responsibility to deliver justice and punish the guilty against the need to find out the truth so that they can bring charges against other potentially guilty people. Congress can also obtain a court order extending immunity after a majority vote of either house or a two-thirds vote of a relevant committee, but must first give prosecutors notice. Historically, Congress has been very deferential in exercising its immunity powers in order to avoid interfering with criminal investigations.

This time, the stakes are too high to wait. Immunity should be granted as soon as Congress and prosecutors are persuaded that Mr. Flynn has information that will lead to a criminal case against one or more people at least as important to the alleged wrongdoing as Mr. Flynn may be. The overriding objective must be learning who if anyone in the United States collaborated with the Russians as well as who knew about it, what they knew and when they knew it.

This case is different from ordinary criminal investigations. Finding the truth is even more important than punishing the guilty, because it is critical to our national security and the future of our democracy.

It is also vitally important that decisions about whether to grant Mr. Flynn immunity, and all other decisions about the Trump-Russia investigation, be made only by people who are completely independent of anyone who could possibly be a subject or target of that investigation. This includes President Trump, who made Mr. Flynn his top national security adviser and, during the presidential campaign, openly encouraged the Russians to spy on his opponent and to reveal what they found..."