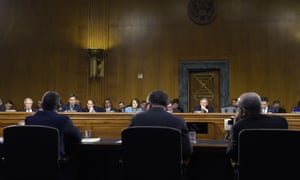 "Donald Trump’s willingness to embrace Russian disinformation was one of the reasons Russia’s interference in the 2016 election worked, the Senate panel investigating the president’s alleged ties to the country heard on Thursday.

Decades of Russian covert attempts to undermine confidence in western institutions, including planting or promoting false news stories or spreading doubt about the integrity of elections, will accelerate in the future unless the US confronts so-called “active measures”, several experts testified to the Senate intelligence committee."