Birth of the Biggest Lie - The New York Times 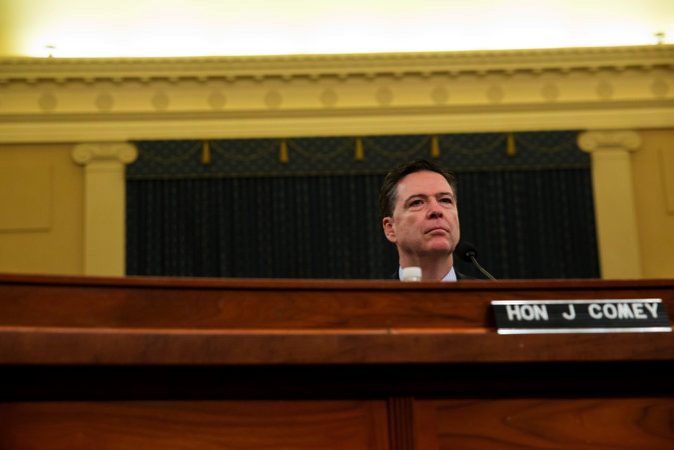 A few things are clear after the congressional testimony of James Comey, the F.B.I. director, this week:

First, Donald Trump owes Barack Obama and the American people an apology for his vituperative lie that Obama committed a felony by wiretapping Trump Tower. It was specious, libelous and reckless, regardless of the weak revelations of “incidental collection” that the Republican chairman of the House Intelligence Committee and Trump transition team member Devin Nunes outrageously made public, briefing the president without first briefing his fellow committee members. Nunes’s announcement was a bombshell with no bomb, just enough mud in the water to obscure the blood in the water for those too willfully blind to discern the difference.

Second, Donald Trump will never apologize. Trump’s strategy for dealing with being caught in a lie is often to tell a bigger lie. He seems constitutionally incapable of registering what others would: shame, embarrassment, contrition. Something is broken in the man — definitely morally and possibly psychologically.

Third, and to me this is the biggest, Comey confirmed that the investigation into the Trump campaign’s ties to the Russians who tampered with our election is not “fake news” manufactured by Democrats stewing over a bitter loss but a legitimate investigation that has been underway for months and has no end in sight.

Individuals who were associated with the president of the United States’ winning campaign are under criminal investigation. That is an extraordinary sentence and one that no American can allow to be swallowed up by other news or dismissed by ideologues.
Depending on the outcome of this investigation, we could be facing a constitutional crisis. Oddly, it is likely that the reason Trump is even in the Oval Office is Comey’s original, extraordinarily inappropriate and unprecedented action. The Trump machinery then used that action to scare Americans about Clinton, in one of the most astonishing acts of deflection and hypocrisy in American history.

The timeline of how the lie of Clinton’s constitutional crisis was born and grew is full of Machiavellian-level misdirections.
On Friday, Oct. 28, a little over a week before Election Day, Comey sent his now infamous letter to Congress saying that “the F.B.I. has learned of the existence of emails that appear to be pertinent” to the Clinton email server investigation and that “the F.B.I. should take appropriate investigative steps designed to allow investigators to review these emails to determine whether they contain classified information, as well as to assess their importance to our investigation.”

Soon after the media reported the letter, Trump said at a crowded rally in New Hampshire:
“Hillary Clinton’s corruption is on a scale we have never seen before. We must not let her take her criminal scheme into the Oval Office. I have great respect for the fact that the F.B.I. and the Department of Justice are now willing to have the courage to right the horrible mistake that they made.”
James Comey testifying on Capitol Hill on Monday. Credit Eric Thayer for The New York Times Photo by: Eric Thayer for The New York TimesThat day, Fox News tweeted a quote from the Trump campaign manager Kellyanne “Alternative Facts” Conway, with an image of her appearing on “The O’Reilly Factor” and text that read: “@KellyannePolls on HRC: “If you’re under your 2nd FBI investigation in the same year then you do have a … corruption & an ethics problem.”

About an hour later, Conway retweeted the Fox News tweet, adding, “Most honest people I know are not under FBI investigation, let alone two.”
That night, as reported by The Des Moines Register, Trump said at a Cedar Rapids, Iowa, rally:
“The investigation is the biggest political scandal since Watergate, and it’s everybody’s hope that justice at last can be delivered.” He went on, “The F.B.I. would never have reopened this case at this time unless it were a most egregious criminal offense.”
Two days later, on Oct. 30, Doug Schoen, a pollster for former President Bill Clinton, said on Fox News that having a president under criminal investigation would pose a constitutional crisis, and the next day he wrote about that it in The Hill, saying:
“I am now convinced that we will be facing the very real possibility of a constitutional crisis with many dimensions and deleterious consequences should Secretary Clinton win the election.”

He continued:
“In the best case scenario, there will be at the very least a criminal investigation of President-elect Clinton. And there will be a criminal investigation of Huma Abedin, which is apparently ongoing. Furthermore, there will be potential investigations into the actions of the Justice Department and most of all the F.B.I. and its director, James Comey.
“After the past eight years wherein America has become progressively more and more divided and a campaign season that has magnified these divisions, I fear for that we will not be able to withstand this kind of continued scandal.”
The Monday that Schoen’s “constitutional crisis” column appeared in The Hill, Trump quoted it at a rally in Michigan. Trump added:
“She would be under protracted criminal investigation and probably a criminal trial, I would say. So we’d have a criminal trial of a sitting president.”
Then that night the Fox News host and Trump flunky Sean Hannityrepeated the warning on his own show:
“Think about the magnitude of all of this for a second. Hillary Clinton could be sworn into office while still being under investigation from the F.B.I., which would then put this country into a major constitutional crisis.”

Hannity continued:
“Now Clinton says Donald Trump, oh, he’s not fit to serve in the Oval Office. But she, and she alone, has created a situation that could do severe damage to this country and the office of the presidency and prevent this country from solving problems.”
Three days later, on Nov. 3, the Trump campaign released a television ad called “Unfit” that said in part: “Hillary cannot lead a nation while crippled by a criminal investigation.”
On Sunday, Nov. 6, just two days before the election, Comey sent another letter to Congress saying that based on the bureau’s review, “we have not changed our conclusions that we expressed in July with respect to Secretary Clinton.” In other words, oops, false alarm, nothing there.
But the damage was done. The Trump campaign had already honed its “constitutional crisis, unfit for office” message, and it had sunk in with many Americans. What those Americans didn’t know — what we learned from Comey’s testimony this week — was that although there was no reason to continue investigating Clinton about her emails, the Trump campaign had been under investigation since July about possible contacts and collusion with Russia in its efforts to influence our election.
Now the very thing that Team Trump and its Fox News media arm warned about, Trump himself has delivered: A compromised presidency and a possible constitutional crisis.

As The New York Times reported after Comey’s testimony:
“Mr. Comey placed a criminal investigation at the doorstep of the White House and said officers would pursue it ‘no matter how long that takes.’ ”
The lie these people promoted about Clinton and shielded about Trump are two of the biggest lies ever told in this country in service of electoral advantage.

No act of this presidency — good or bad, beneficial or detrimental — can ever be considered without first contextualizing that this presidency itself was conceived in deception and is being incubated under an extraordinary lie.
The Trump presidency is a corruption that flows from corruption. It is damned by its own damned lies.

Birth of the Biggest Lie - The New York Times: ""