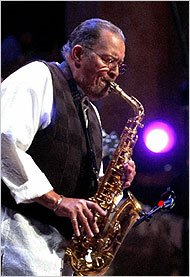 Jackie McLean, 74, one of the foremost alto saxophone players of the past 50 years, who also helped elevate jazz studies to a serious academic discipline, died March 31 at his home in Hartford, Conn. His family said that he died of "a long illness" and that the cause of death would be announced later.

A musical descendant of bebop master Charlie Parker, Mr. McLean developed a strong, uncompromising style in the 1950s and remained a prominent voice on his instrument for decades. He recorded more than 60 albums and was a mentor to younger musicians as a bandleader and as a teacher.

He grew up in Harlem, where his neighbors included such jazz greats as Duke Ellington, Don Redman, Nat "King" Cole and Thelonious Monk. He often recalled those heady days in interviews and was a principal interview subject in Ken Burns's 10-part documentary on jazz in 2000.

For the past 35 years, he lived in Hartford, where he established the jazz studies program at the Hartt School of Music at the University of Hartford, now called the Jackie McLean Institute of Jazz. It was one of the country's first comprehensive jazz programs.

With his wife, Dollie, he also founded the Artists Collective, a cultural arts center in Hartford that has educated thousands of primarily African American students in music, dance, drama and the visual arts. He also maintained a long involvement in civil rights, dating from the 1960s.

His interest in education derived from his experiences with the jazz giants of an earlier era. At 16, he met bebop pianist Bud Powell, who often invited the young saxophonist to his house to study and practice. In his teens, Mr. McLean would wait at subway stops to meet Parker and walk with him to nightclubs, gleaning musical insights from his idol.

The younger musician copied both Parker's playing style on alto saxophone and his addiction to heroin. For much of the 1950s and early 1960s, Mr. McLean struggled with narcotics and often found himself in legal trouble.

After Parker's death in 1955, Mr. McLean worked with bassist and bandleader Charles Mingus, who encouraged him to find his own style, free from Parker's influence. From 1956 to 1958, Mr. McLean was a member of Art Blakey's Jazz Messengers, where he honed his powerful searing tone, which was usually slightly sharp.

"He had his own sound," said critic Ira Gitler, who knew Mr. McLean for 55 years. "He had a cry in his playing and a lot of fire."

After making 21 albums for Blue Note Records between 1959 and 1967, Mr. McLean turned more toward teaching and grew less active as a performer. In the 1980s and 1990s, he returned to the stage and the recording studio with renewed vigor, and he often performed with his son, saxophonist Rene McLean.

"It was my most rewarding, my most exciting and my most challenging musical experience," Rene McLean said yesterday. "I had to rise to the occasion. It made no difference if I was his son or brother.

"We had very magical musical moments together."

John Lenwood McLean was born in New York City on May 17, 1931. His father was a jazz guitarist who died in 1939, and his childhood friends included future jazz stars Sonny Rollins, Walter Bishop Jr., Kenny Drew and Art Taylor.

He adopted modal and free-jazz techniques later in his career, but he retained the same intensity he had in his youth.

On one of his final efforts, "Nature Boy" (2000), he showed a more sensitive side of his musical persona with an album of ballads. In 2001, he was recognized as an American Jazz Master by the National Endowment for the Arts.

Mr. McLean was especially popular in Japan and once came across a tiny club in Yokohama called the "Jackie McLean Coffeehouse" that was a virtual shrine to his career. He gave his final performances during a tour of Europe and the Middle East in 2004.

"Many times, we could finish each other's ideas," said Rene McLean, who was with his father on that final tour. "It was just unique and mystical."

Besides his son, of New York, survivors include his wife, Dollie McLean of Hartford; a daughter, Melonae McLean, and son, Vernone McLean, both of Hartford; five grandchildren; and five great-grandchildren.
Posted by John H Armwood II at 12:14 PM