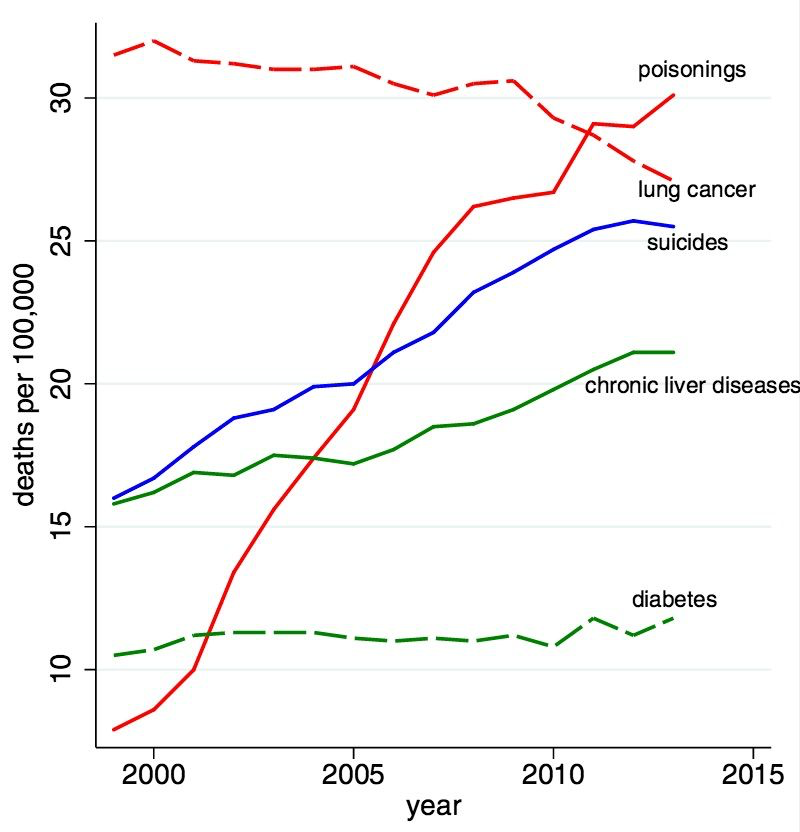 "Deaton thinks middle-aged white Americans have 'lost the narrative of their lives' But what's behind the substance abuse? One possible factor here: This demographic group has faced a rise in economic insecurity over the past decade, driven by things like the financial crisis and the collapse of manufacturing.

Still, it's difficult to put together a full story of what's going on. After all, if the recession or decline of manufacturing was the only factor, we might expect to see a similar uptick in mortality rates among middle-aged people in places such as Europe. But America seems to be unique in this regard.

'An anthropologist friend here says that [white, middle-age Americans] have lost the narrative of their lives — meaning something like a loss of hope, a loss of expectations of progress,' he explained.

Though African Americans as a group are still worse off overall, Deaton added, their quality of life has improved over the past several decades. 'And when Hispanics look back, they may look back to where they came from, or what their parents or grandparents had,' he continued.

So Deaton says this particular group of middle-aged white Americans may have had higher expectations than others when it comes to steady employment and a bright future, and the stress of losing that could well be driving their deadly behaviors.

'The white non-Hispanics may be more susceptible to despair, and perhaps to the alcohol or drug 'solution,' especially those with less education,' he said. 'And then there is the availability of opioids and of heroin.'