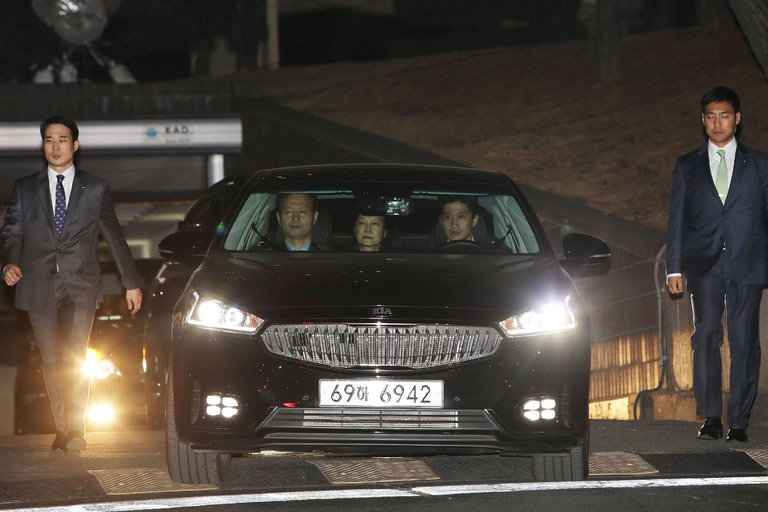 "SEOUL, South Korea — South Korea’s recently impeached president, Park Geun-hye, was arrested on Friday, becoming the first leader since the nation’s transition to democracy to be sent to jail.
Ms. Park’s dramatic downfall capped months of turmoil and intrigue, as huge crowds took to the streets to protest a sprawling corruption scandal that shook the interlocking worlds of government and business — including the leadership of Samsung, the nation’s largest conglomerate.
A judge at the Seoul Central District Court issued the warrant early Friday morning, warning that if Ms. Park were not taken into custody quickly she might “destroy evidence.” The charges against her include bribery, extortion and abuse of power.
In December, the National Assembly voted overwhelmingly to impeach Ms. Park, and she was formally removed from office on March 10.
Continue reading the main storyRELATED COVERAGE

South Korean Prosecutors Seek to Arrest Park Geun-hye MARCH 26, 2017
Samsung’s Leader Is Indicted on Bribery Charges FEB. 28, 2017
South Korea Removes President Park Geun-hye MARCH 9, 2017Her removal rattled the delicate balance of relationships across Asia at a tense moment. Ms. Park’s conservatives, in power for four years, had joined the United States in pressing for a hard line against North Korea’s nuclear program. She had accepted Washington’s deployment of an advanced missile defense system that has angered China, which is fearful of an arms race in the region.
Moon Jae-in, the liberal opposition leader considered most likely to win the May 9 election to select a new president, has vowed to review that decision, as well as an unpopular deal she struck with Japan over the so-called comfort women, or Korean sex slaves, used by Japan’s army during World War II.
Mr. Moon is also viewed as less confrontational toward North Korea and China, and has advocated dialogue to halt the North’s nuclear and missile threats.
Ms. Park had spent the night in the prosecutor’s office waiting to learn if she would be placed under arrest. Shortly after 3 a.m., Judge Kang Bu-young issued the warrant and Ms. Park was taken to a jail outside Seoul, the South Korean capital.
Prosecutors had already said that they would indict the former president on 13 criminal charges regardless of whether the judge issued an arrest warrant. Once her trial begins in the coming weeks, Ms. Park will commute from her cell to a Seoul courthouse.
Ms. Park was accused of conspiring with a longtime confidante, Choi Soon-sil, to collect tens of millions of dollars from big businesses, including more than $38 million in bribes from Samsung. Both Ms. Choi and Samsung’s top executive, Lee Jae-yong, have previously been arrested and are standing trial on charges including bribery."