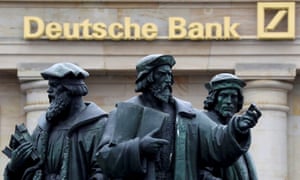 "The German bank that loaned $300m (£260m) to Donald Trump played a prominent role in a money laundering scandal run by Russian criminals with ties to the Kremlin, the Guardian can reveal.

Deutsche Bank is one of dozens of western financial institutions that processed at least $20bn – and possibly more – in money of “criminal origin” from Russia.

Law enforcement agencies are investigating how a group of politically well-connected Russians were able to use UK-registered companies to launder billions of dollars in cash. The companies made fictitious loans to each other, underwritten by Russian businesses.

The companies would default on these “debts”. Judges in Moldova then made court rulings enforcing judgments against the firms. This allowed Russian bank accounts to transfer huge sums to Moldova legally. From there, the money went to accounts in Latvia with Trasta Komercsbanka.

Deutsche, Germany’s biggest lender, acted as a “correspondent bank” for Trasta until 2015. This meant Deutsche provided dollar-dominated services to Trasta’s non-resident Russian clients. This service was used to move money from Latvia to banks across the world.