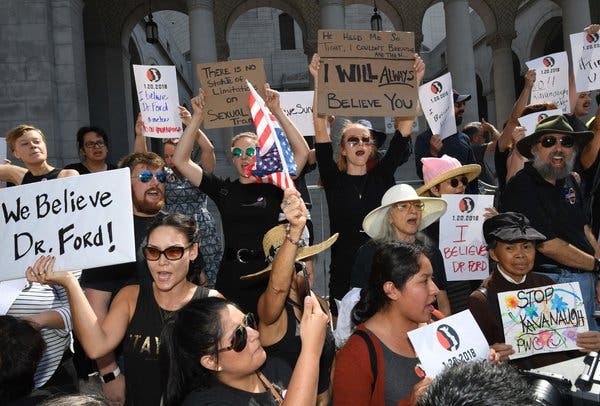 
Opinion Columnist
"The Federal Bureau of Investigation is on the case.

The agency is now looking into allegations that the Supreme Court nominee Brett Kavanaugh engaged in aggressive sexual misconduct — including assault and possibly rape — when he was in high school and college.

And yet there is a gnawing in my gut that nothing we do now will fully or even sufficiently cause us to recover from the tremendous damage already done by the way the Senate has treated these allegations and the way that the media has covered them.

We have severely damaged the confidence of survivors of sexual assault, particularly childhood sexual assault, to come forward to the authorities and talk openly about what happened to them.

At the same time that the accuser Christine Blasey Ford’s example has inspired countless victims to feel empowered and share their trauma in all manner of forums, the way that her courage has been met in the Senate with condescension, contempt and hostility has secured in many survivors a sense that power will not be sympathetic to the disclosure; it will treat it as an affront and an attack.

The message that the Republican members of the Senate Judiciary Committee sent to survivors, mostly women, but also many men, is this:

Your pain is not our problem. Your bodies are not your own. Your voice, even at its strongest, is still weaker than any man’s, no matter how sniveling and snide. We are here to protect the order, an old order, in which men rule, even when unruly and reprobate.

More from opinion on the Kavanaugh-ford hearing

“Why didn’t somebody call the F.B.I. 36 years ago?” Trump asked on Fox News. Can you imagine: a 15-year-old girl struggling with processing a sexual assault having the presence of mind, composure and wherewithal to track down the proper F.B.I. contact in the pre-internet age and report something that few people even talked about in those days?

These senators are telling teenage boys this:

You can drink beer like it’s water and we will believe you when you say you have had perfect recall your entire life in spite of it. You can write all sorts of damning horribleness in your yearbook and have multiple people accuse you of sexual assault, and yet we will still hail you as a paragon of integrity and tell you in front of the world that “you’ve got nothing to apologize for,” as Senator Lindsey Graham said of Kavanaugh during the hearing.

What those senators are saying to all of us is that, for them, patriarchy and privilege occupy positions of primacy in this country. And, when that primacy is threatened, it is perfectly reasonable that those affected would whine and rage at the possibility of being denied that to which they are owed, as birthright and gender benefit.

As sexual assault accusers go, one would have been hard pressed to find one more able and affable than Ford. She is a professor who talked about the alleged assault before Kavanaugh’s nomination, one who by all accounts wanted to remain anonymous. Compelled by her own sense of patriotism, she finally came forward and told her story with grace and composure as millions of Americans watched.

The senators, unable to impeach her credibility outright and leery of exposing their callousness and contempt, chose instead a patronizing paternalism. They shed crocodile tears for Ford, painting her as a victim, yes: not of Kavanaugh but rather of the Democrats on the committee. To them, somehow she was a clueless pawn in the Democrats’ game to besmirch and indeed destroy the name of a good man.

This diminished and belittled in every way the very real and very credible accusation that Ford made and completely blotted out the incredible courage it would take for a person to appear before them if it indeed happened to them.

In other words, the Republicans on the committee patted her on her head while spitting in her face.

And somehow we still have the gall to feign astonishment that people wouldn’t immediately report an attack, instead holding it for a year, decades, maybe even a lifetime.

People don’t come forward because of authorities like the Republicans on the committee, the ones who will scoff at you, blame you and not believe you.

Just as Ford was creaking the door open and empowering others to come out of the closet with their own stories, Republicans on the committee rushed to slam it back shut and secure its closure with enmity if necessary.

They demand to make survivors quake with fear again."