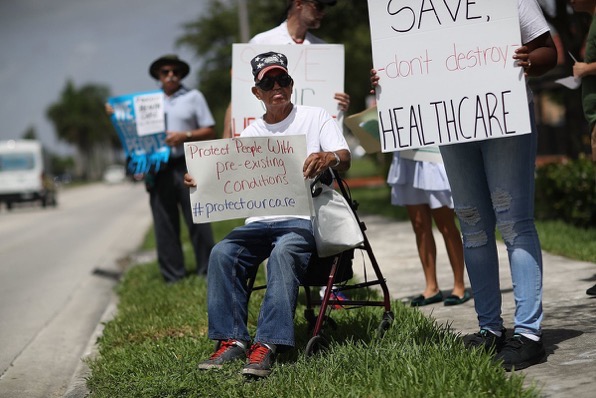 "In a span of less than 24 hours this past week, the Trump administration took two seemingly contradictory actions that could have profound effects on the insurance marketplaces set up by the Affordable Care Act.

Health analysts say that at least one of the efforts, coupled with previous changes initiated by the administration, could help transform the insurance market to be much more like it was before the 2010 federal health law took effect — when regulation, coverage and consumer protections varied widely across the United States.

The week's first move came on Monday morning, when Trump's health officials issued guidance that could undercut the exchanges set up for people who buy their own health insurance. The administration's guidance makes it easier for states to get around some ACA requirements, Trump's guidance would allow the use of federal subsidies for skimpier plans that can reject people who have pre-existing medical conditions.

By the next day, the administration had made a second move with a proposed rule that could bolster the health of the ACA marketplaces by sending millions of people who now have job-based coverage into the exchanges, armed with tax-free money from their employers to buy individual plans.

Both efforts play into the parallel narratives — one from Republicans and the other from Democrats — that are dominating the parties' bitter political debate over the ACA, also known as Obamacare.

Frustrated that a Republican-controlled Congress has been unable to repeal the Affordable Care Act outright, the Trump administration has continued to work to undermine that law by weakening the marketplaces and the law's consumer protections, some critics and health policy specialists say.

Trump's efforts make it easier for insurers to offer skimpier policies that bypass the law's rules, such as protections for people with pre-existing conditions or a ban on annual or lifetime limits on what insurers will pay.

Congress also zeroed out the tax penalty on Americans who don't sign up for health insurance, effective next year. Combined, these moves could reduce enrollment in ACA health plans — potentially driving up premiums for those who remain.

Even without repealing the ACA, the Republican efforts are shifting control of health insurance policy decisions back to the states, say policy analysts.

"Some states will do everything they can to keep individual markets strong and stable. Others won't," says Sabrina Corlette, a research professor at the Center on Health Insurance Reforms at Georgetown University.

So what expectations should consumers have? Analysts say there are three key takeaways:

Polls show that keeping the ACA's guarantees of coverage for people with medical problems is a top concern for Americans, and Democrats have made their defense of the health law a key part of their midterm election campaigns.

Republicans have gotten that message; even those who voted to repeal the ACA or joined a lawsuit by 20 red states to overturn the federal law now say they want to protect people with pre-existing conditions. Still, GOP lawmakers have not introduced any plan that would be as protective as the current law.

In August, the administration released a rule allowing expanded use of short-term health plans, which are less expensive than ACA policies. To get those lower prices, most of these plans do not include insurance coverage for prescription drugs, maternity care or mental health or substance abuse treatments.

The move is unlikely to benefit people who have chronic health problems, because short-term plans are allowed to reject people with pre-existing conditions or decline to cover care for those medical problems.

Under the rule, insurers can sell these short-term policies (which may be sold as soon as next month) to last for up to a year's duration, with an option to renew for up to three years. That reverses an Obama-era directive that limited the length of such policies to a maximum of 90 days.

Administration officials estimate such plans could draw 600,000 new enrollees next year, and others have estimated the numbers could be far higher. The concern is if many healthy people in 2019 switch out of the ACA market — now estimated to have about 17 million enrollees — and choose short-term plans instead, premiums will rise for those who remain in the ACA market. That would hike premiums for people with pre-existing conditions. It would also make the ACA market less attractive for insurers and could lead them to stop offering plans on the exchange.

Which state you live in matters

One of the biggest changes ushered in with the ACA was a standard set of rules across all states.

Before the law took effect, consumers buying their own coverage saw tremendous variation in what was offered and what protections they had depending on the state where they lived.

Most states, for example, allowed insurers to reject applicants who have medical conditions — such as diabetes, cancer, depression, Down syndrome or asthma.

A few states required insurers to charge similar premiums across the board, but most allowed wide variation in the size of the premium a customer might be charged, based on age, gender or health. Some skimpy plans didn't cover prescription drugs, chemotherapy or other medical services.

By standardizing the rules and benefits, the ACA barred insurers from rejecting applicants who have medical conditions and from charging these applicants higher premiums. The ACA guarantees that women cannot be charged more than men for the same health policy, and insurers are permitted to charge older people no more than three times what they charge younger applicants.

But under the new guidance issued this week that gives states more flexibility on what is offered, consumers could again see a wide variation in coverage, premium rules and even subsidy eligibility.

"It shifts pressure to state politicians," says Caroline Pearson, a senior fellow at NORC, a nonpartisan research institution at the University of Chicago. "You risk making some [constituents] worse-off by threatening those markets," says Pearson. "That is always going to be hard."

Millions more are likely to join the 'buy-your-own' ranks

The proposed rule released Tuesday allows employers to fund tax-free accounts — called health reimbursement arrangements, or HRAs — that workers can use to buy their own coverage on the ACA marketplaces.

The administration estimates about 10 million people will do so by 2028 — a substantial boost for federal and state ACA exchanges, which policymakers say never hit the enrollment numbers needed to attract enough insurers and hold prices down.

John Barkett, senior director of policy affairs at Willis Towers Watson, a benefits consulting firm, says he expects some employers to now "seriously consider" relying on a state or federal health insurance exchange to furnish health insurance to their workers. And if they do, the infusion of workers will improve options within those insurance exchanges by attracting more insurers, Barkett says.

"These people coming in will be employer-sponsored, they'll have steady jobs," Barkett notes, and will likely stick with coverage longer than those typically in the individual market.

Currently, about 17 million people buy their own health insurance, with about 10 million of those using federal or state ACA marketplaces to do so. The others buy private plans through brokers.

Trump's proposed rule won't be finalized for months, but it could result in new options by 2020.

If these workers seeking coverage are generally healthy, the infusion could slow premium increases in the overall ACA marketplace because it would improve the risk pool for insurers.

However, if employers with mainly higher-cost or older workers opt to move to the marketplaces, it could help drive up premiums.

Curiously, the administration notes in its proposed rule that the ACA has provisions that could protect the marketplace from that type of adverse selection, which can drive up prices. But most of the protective factors cited by the rule have expired or been weakened or removed by Trump or the Republican-controlled Congress — such as the tax penalty for being uninsured and the federal subsidies to insurers to cover lower deductibles for certain low-income consumers.

Benefits consultants and health policy specialists are skeptical about how many companies will move to an HRA plan, given the tight labor market. Continued uncertainty about the fate of the ACA marketplace may keep them reluctant to send workers out on their own to find health insurance, these analysts say.

The health benefits package a company offers its employees is now a big factor in its ability to attract and retain workers, says Chris Condeluci, a Washington attorney. He previously worked for Sen. Chuck Grassley, R-Iowa, and served as counsel to the Senate Finance Committee during the drafting of the ACA.