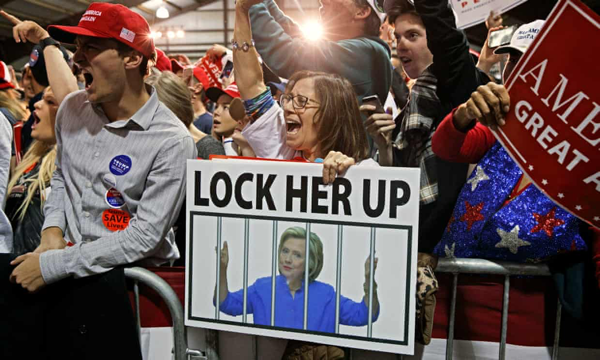 "The president has blamed the media for the ‘bad and hateful’ atmosphere – but has failed to acknowledge his own rhetoric
Amanda HolpuchLast modified on Thu 25 Oct 2018 16.55 EDT
Donald Trump said political figures “must stop treating political opponents as morally defective” as he condemned the attempted bombings of prominent liberals this week. But his own language towards the targets of the bombs has been unusually coarse for a modern US president.

“Any acts or threats of political violence are an attack on our democracy itself,” Trump told a rally on Wednesday, encouraging unity. He continued: “Those engaged in the political arena must stop treating political opponents as morally defective.”

He went on to blame the media for incivility – but he failed to acknowledge his own rhetoric. On Thursday morning, he stood by those comments. Trump tweeted: “It has gotten so bad and hateful that it is beyond description. Mainstream Media must clean up its act, FAST!”

So far, the named targets of the attempted bombings by mail are people Trump has publicly attacked.

Robert De Niro
De Niro has long been critical of Trump, and said on stage at the Tony awards in June: “I’m gonna say one thing. Fuck Trump.”

He continued: “It’s no longer down with Trump. It’s fuck Trump.”

Donald J. Trump (@realDonaldTrump)Robert De Niro, a very Low IQ individual, has received too many shots to the head by real boxers in movies. I watched him last night and truly believe he may be “punch-drunk.” I guess he doesn’t...

June 13, 2018
Maxine Waters
Trump also called representative Waters, a Democrat from California, “an extraordinarily low IQ person” in a tweet that ended: “Be careful what you wish for Max!”

Donald J. Trump (@realDonaldTrump)Congresswoman Maxine Waters, an extraordinarily low IQ person, has become, together with Nancy Pelosi, the Face of the Democrat Party. She has just called for harm to supporters, of which there are many, of the Make America Great Again movement. Be careful what you wish for Max!

June 25, 2018
Waters has said people have threatened to assassinate, hang and lynch her because of her criticism of Trump.

George Soros
In a tweet earlier this month, Trump baselessly accused Soros of paying protesters. He failed to provide evidence.

Donald J. Trump (@realDonaldTrump)The very rude elevator screamers are paid professionals only looking to make Senators look bad. Don’t fall for it! Also, look at all of the professionally made identical signs. Paid for by Soros and others. These are not signs made in the basement from love! #Troublemakers

October 5, 2018
Soros backs progressive causes, which puts him squarely against Trump’s agenda. Soros has also criticized the president in the past.

Eric Holder
Trump threatened the former attorney general after Holder said Democrats need to be more confrontational at a campaign event for Georgia candidates in the midterms.

Holder was criticized for advocating violence, which he later said was not his intention. In response to Holder’s remarks, Trump told Fox & Friends: “He better be careful what he’s wishing for.”

Donald J. Trump (@realDonaldTrump)Has anyone looked at the mistakes that John Brennan made while serving as CIA Director? He will go down as easily the WORST in history & since getting out, he has become nothing less than a loudmouth, partisan, political hack who cannot be trusted with the secrets to our country!

August 18, 2018
Brennan suggested he may have been targeted because of his past criticisms of Trump. “His rhetoric, I think, too frequently fuels these feelings and sentiments that now are bleeding over into, potentially, acts of violence,” Brennan said at an event in Austin, Texas.

In March, Biden threatened to fight Trump if they were still in high school. Trump responded:

Donald J. Trump (@realDonaldTrump)Crazy Joe Biden is trying to act like a tough guy. Actually, he is weak, both mentally and physically, and yet he threatens me, for the second time, with physical assault. He doesn’t know me, but he would go down fast and hard, crying all the way. Don’t threaten people Joe!

Trump has been tweeting criticism of Biden since 2011.

Hillary Clinton
Two years after defeating Clinton in the presidential election, Trump still attacks Clinton at rallies while supporters chant “lock her up” and regularly complains about her on Twitter and in interviews.

As of January, he had mentioned her at least 229 times since taking office, according to an analysis by the Daily Beast.

Clinton has been critical of Trump in interviews, speeches and her book What Happened.

Speaking at an event in Florida on Wednesday, Clinton said the US was in a “troubling time” and condemned divisive rhetoric by politicians. “We have to do everything we can to bring our country together,” said Clinton. “We also have to elect candidates who will try to do the same.”

Barack Obama
Trump criticizes his predecessor frequently, as he did when Obama was in office.

Obama has been critical of Trump’s actions and rhetoric, but rarely mentions his name. He has not tweeted directly about Trump.

Debbie Wasserman Schultz
So far, no packages are known to have been addressed to the Democratic congresswoman from Florida, but her office is the return address on some of the packages.

Her office was evacuated on Wednesday after one of the packages was redirected there because of the return address.

Trump has repeatedly criticized Wasserman Schultz and first tweeted about her in 2012, when she was chair of the Democratic National Committee.

Donald J. Trump (@realDonaldTrump)Debbie Wasserman Schultz is hard to watch or listen to--no wonder our country is going to hell!

How Trump targeted his biggest critics before they were sent pipe bombs | US news | The Guardian: