F.B.I. Review of Kavanaugh Was Limited From the Start - The New York Times 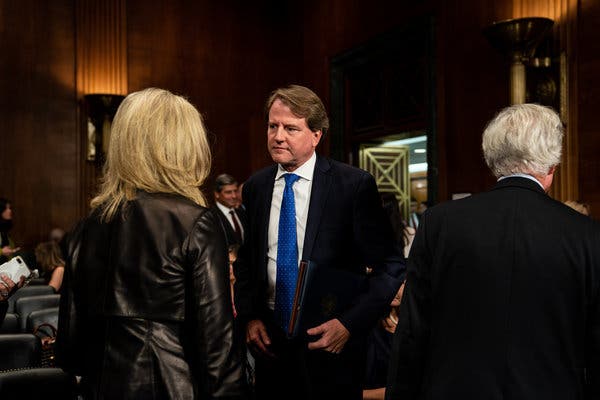 WASHINGTON — An exasperated President Trump picked up the phone to call the White House counsel, Donald F. McGahn II, last Sunday. Tell the F.B.I. they can investigate anything, he told Mr. McGahn, because we need the critics to stop.

Not so fast, Mr. McGahn said.

Mr. McGahn, according to people familiar with the conversation, told the president that even though the White House was facing a storm of condemnation for limiting the F.B.I. background check into sexual misconduct allegations against Judge Brett M. Kavanaugh, a wide-ranging inquiry like some Democrats were demanding — and Mr. Trump was suggesting — would be potentially disastrous for Judge Kavanaugh’s chances of confirmation to the Supreme Court.

It would also go far beyond the F.B.I.’s usual “supplemental background investigation,” which is, by definition, narrow in scope.

The White House could not legally order the F.B.I. to rummage indiscriminately through someone’s life, Mr. McGahn told the president. And without a criminal investigation to pursue, agents could not use search warrants and subpoenas to try to get at the truth.

Mr. Trump backed down, although he said publicly the next day that the F.B.I. “should interview anybody that they want within reason.” But the episode on Sunday was further evidence of the confusion, including on the part of the president, about what would happen after Senator Jeff Flake, Republican of Arizona, forced a one-week delay in the confirmation vote of Judge Kavanaugh to the Supreme Court by calling for a new F.B.I. investigation.

From the start, there were different expectations. Democrats hoped for a full investigation into the allegations, even as they were skeptical that one would occur and angrily said on Friday that the White House had quashed it. In all, 10 people were interviewed, and an 11th declined to cooperate.

But the F.B.I. did not interview the two people at the center — Judge Kavanaugh and his main accuser, Christine Blasey Ford.

A spotlight on the people reshaping our politics. A conversation with voters across the country. And a guiding hand through the endless news cycle, telling you what you really need to know.

Television reporters at the White House on Thursday as the F.B.I. report was made available to Senators on Capitol Hill.CreditT.J. Kirkpatrick for The New York Times

Representative Jerrold Nadler, Democrat of New York, declared the F.B.I. efforts to be “a whitewash” and vowed to open a new investigation into the sexual misconduct allegations if Democrats take control of the House in November’s elections.

“We have to assure the American people either that it was a fair process and that the new justice did not commit perjury, did not do these terrible things,” Mr. Nadler said.

But White House and former F.B.I. officials, who spoke on the condition of anonymity to discuss the inquiry, said the weeklong examination of the charges against Judge Kavanaugh was similar to the many previous times that the bureau has been asked to update a background check of a nominee to account for new information.

People familiar with the process say the White House is always in charge of background checks and can limit the scope of the questions F.B.I. agents can ask and who they can interview.

In the case of Judge Kavanaugh, Mr. McGahn instructed the F.B.I. to do an additional background check focused exclusively on the sexual misconduct charges leveled by three women.

In talking with Republican senators, White House officials said, it became clear to Mr. McGahn that there were four people whom senators wanted to be interviewed: Deborah Ramirez, who alleged that Judge Kavanaugh exposed himself to her during a college party; Mark Judge, a high school friend who was said to have witnessed an assault by Judge Kavanaugh on Christine Blasey Ford at a high school party; and two other friends who Dr. Blasey said were at that party, P.J. Smyth and Leland Keyser.

Late Friday, Dr. Blasey’s legal team sharply criticized the inquiry and said in a statement that “an F.B.I. investigation that did not include interviews of Dr. Ford and Judge Kavanaugh is not a meaningful investigation in any sense of the word.”

The goal of the inquiry, White House officials said, was to look for witnesses who had firsthand accounts of sexual misconduct. The inquiry would not include questions about whether Judge Kavanaugh was frequently drunk or had been misleading in his Senate testimony.

Armed with that list, F.B.I. agents began conducting the interviews.

The White House was kept informed as the agents did their work, with summaries of the interviews — known as “Form 302s” — sent to the White House as they were completed.

Senator Patrick J. Leahy, Democrat of Vermont, arrived at a secure room to view the single copy of the F.B.I. report on Capitol Hill on Thursday.CreditErin Schaff for The New York Times

Officials said that in a typical supplemental background check inquiry, agents would be required to ask the White House for permission to expand beyond the initial list of interview subjects.

But they insisted that the F.B.I. was not required to do that in the case of the allegations against Judge Kavanaugh. Over the course of the week, they said, agents decided to add a handful of other interviews to the inquiry.

According to a list distributed by the Senate Judiciary Committee, F.B.I. agents also interviewed Timothy Gaudette and Christopher Garrett, two high school friends of Judge Kavanaugh who were listed in the judge’s 1982 calendar as having attended a high school party. In addition, agents interviewed a lawyer of one of the friends.

Agents also interviewed two potential eyewitnesses to the episode alleged by Ms. Ramirez, as well as one of her close friends. The F.B.I. did not identify the three, but two of them were Kevin Genda and Karen Yarasavage, who are now married and knew Ms. Ramirez and Mr. Kavanaugh in college, according to a lawyer briefed on the matter. Mr. Genda and Ms. Yarasavage were each interviewed for more than two hours, according to the lawyer. And although Mr. Genda was viewed as a potential witness to the episode, it is not clear whether their statements offered any support for Ms. Ramirez’s account.

White House officials insisted that neither Mr. McGahn nor any other West Wing lawyer prohibited the F.B.I. from interviewing them. But some former law enforcement experts said it was an odd decision not to include the two people at the center of the controversy.

Robert Cromwell, a former F.B.I. agent who oversaw sensitive background investigations of political appointees, doubted that agents decided not to interview Dr. Blasey and Mr. Kavanaugh on their own.

“I don’t think that it was in the parameters of the request,” he said. “That’s what I would assume. It would be frustrating as an investigator. The nature of investigators is to get to the bottom line. You’d want to talk to both of them.”


F.B.I. Review of Kavanaugh Was Limited From the Start - The New York Times
Posted by John H Armwood II at 3:36 AM