Women Don’t Think Alike. Why Do We Think They Do? - The New York Times 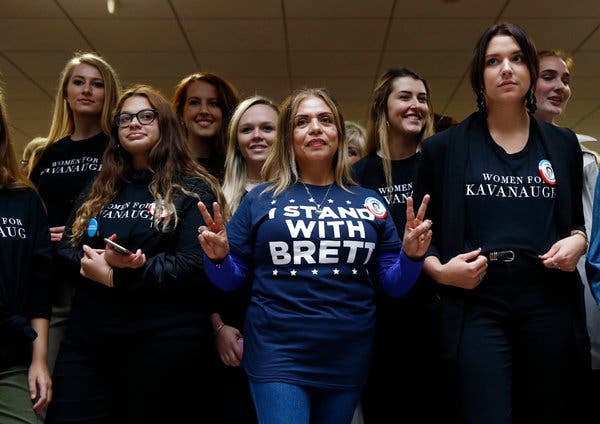 Ms. Chira is a senior correspondent and editor on gender issues for The New York Times.

What are those women thinking?

The ones who cheered President Trump’s mockery of Christine Blasey Ford at a rally in Mississippi, tweeted #HimToo in support of their sons who might one day be, in their eyes, unfairly accused of assault?

On the left, they’re being reviled as gender traitors, depicted as betraying the sisterhood and acting against their own best interests. The Democrats’ hope for a blue wave rests on female voters coming out to register their displeasure with the president’s party. Women will be acting as a political force.

The question is why so many people are still surprised that they don’t, even after the election of 2016.

Political scientists have found that some of the very attacks that were supposed to alienate all women in 2016 — such as Mr. Trump’s jab that Hillary Clinton was playing the “woman card” — instead made a segment of women more enthusiastic about him, and more hostile to her. Some women, primarily the core loyalists of President Trump’s reshaped Republican Party, hold decidedly traditional views about women’s place, prerogatives and power.

And in 2018, some women appear receptive to Mr. Trump’s midterm strategy of attacking the #MeToo movement, even if it angers some college-educated and independent women who Republicans fear they may have lost anyway.

“Why is it that it’s hard for us to think of women as being sexist?” said Erin C. Cassese, a political scientist at the University of Delaware who assessed women’s attitudes by sifting through new data on the 2016 elections. “In the common usage, a sexist is a man who has disdain for women, who objectifies and demeans women.” But that’s too limited a definition, she explained: “Sexism is a broader set of attitudes about power and relationships between men and women.”

No one is saying that being a Republican woman means being a sexist. But for some conservative women, however they are labeled, political power rightly lies with men.

Krysta Fitch, a 34-year-old stay-at-home mother in Walls, Miss., said she cast the first vote in her life for Mr. Trump and enthusiastically joined his rally in the nearby town of Southaven this month. She said that women have no business running for president. “In the Bible it says that a man is responsible for leading his household,” she said. “And a woman’s only supposed to step up if he’s not willing. Aside from that, women are just too emotional. I feel like it would be dangerous to have a woman in a position to potentially start a war.”

Although she reflects conservative evangelical sentiment, Mrs. Fitch is an outlier among most Republican women. Studies of these voters suggest that they are receptive to both female and male candidates. Cleta Mitchell, a lawyer and Republican activist, is quick to say that she and other conservative women have been at the receiving end of sexism themselves. “Do we get together and talk about the sexism of the men?” she said. “Yes, we do. We get it. We don’t have blinders on.”

But she embraces the idea of innate differences between men and women, and like many Republicans, does not look to government to press for gender equality.

“My brand of feminism is based on the realities of human nature,” she said. “If you accept that these experiences are going to present themselves, what’s the best way to help young women and ourselves address them? Not by demanding some policy.”

So why don’t women who share the all-too-common experience of being demeaned by men find that a source of solidarity? And why would women oppose measures that promise to offer them more rights and freedoms?

It depends on which identities — woman, wife, mother, race, political or religious affiliation — are more central for which woman.

Psychologists measure whether women display what they call “hostile sexism,” which sees any gains by women coming at the expense of male power. For example, those people might agree with the statement “Women demanding equality seek special favors.” They also measure “benevolent sexism,” which encourages the protection of women in their traditional roles — people might agree with the statement “Men should be willing to sacrifice their well-being to provide for women in their lives.”

Some women, white married women in particular, have tied their fates more closely to men. That is why, in several interviews with supporters of Mr. Trump and Justice Kavanaugh, the president’s branding of #MeToo as unfair to men resonated with women protective of their sons or husbands.

“I have two sons and I have a daughter as well,” said Jill Gregory, 33, a Trump supporter who lives in Olive Branch, Miss. “If that was my daughter, I would want her to be heard. On the other side, my two boys, I would hate for them to be accused of something they didn’t do.”

As the 2016 election demonstrated, some women regard anything that hurts the traditional male breadwinner — or the status they gain from being white — as a blow to their standing as well.

Mr. Trump’s appeal to economic, racial and gender resentment, and his promise to return to old hierarchies, appealed to a segment of women even as it did to men, a study by Professor Cassese and Tiffany D. Barnes of the University of Kentucky showed. Many of these women not only scored high on the “hostile sexism” scale, they also clung to the advantage of being white as a compensation for the disadvantage of being a woman. There is no universal female experience. And, as conservative women’s support for Justice Kavanaugh shows, there is no universal female response to allegations of abuse.

As Republican women point out, the response to allegations of harassment can be partisan too — where, they ask, is the outrage about Keith Ellison, the Democratic congressman from Minnesota who has been accused of domestic abuse? (He denies the allegations.) Where was it over President Bill Clinton?

Conservative women condemn sexual harassment, too. But several interviewed rejected the idea that women always tell the truth about it or that men are single-handedly to blame.

Several conversations in Mississippi revealed a profound gulf between conservatives and liberals, even among those women who recounted searing experiences with sexual harassment themselves. These women prided themselves on a certain stoicism and grit, implying that unlike elite women, they could not afford to dwell on their experiences years later.

“I don’t understand why women are afraid to get the help they need,” said Crystal Walls, 60, a waitress in Southaven, who said she had fended off abuse herself and said her daughter had been raped and beaten. “I can’t comprehend that. I’m maybe stronger.”

Mrs. Fitch said her stepfather abused her for several years, beginning when she was about 9 years old and ending with his arrest and imprisonment when she was 13. She says the experience has stayed with her, but has gained comfort from her church’s support, her marriage, and being a mother. She spoke on a hot October day outside her home in Mississippi, with a kitten curled up in her lap, and recounted her trauma in a calm, resolute tone.

She prided herself on refusing to tolerate disrespect from men, explaining that when she was rear-ended recently by a drunken driver who then grabbed her arm, she reported the incident to the police and he was charged with assault.

“I just have a hard time believing that someone would wait that long to say something,” she said of Dr. Blasey. “I understand that they feel ashamed and all of that. When you’re not around that person that did that to you anymore, it removes some of the fear you have that they might retaliate against you. For her not to be able to remember most of the things that happened doesn’t make sense to me. There are small, minute details that stick with you no matter what. I mean the room you’re in, or the smell of that person, it stays with you.”

American politics was upended in 2016 partly because conventional candidates did not understand people like Krysta Fitch and Crystal Walls.

“There are a lot of white religious women and rural women in the Republican Party,” said Mirya R. Holman, a political scientist at Tulane who is a co-author of the study about the effectiveness of Mr. Trump’s election attacks on women. “This sort of national dialogue of ‘All women should hate Donald Trump’” is alienating, she said. Being told, in effect, that their deeply held convictions are idiotic makes it impossible to have a productive national conversation about sexual misconduct.

It’s not only sexual harassment, but the broader question of gender equality that plays out differently for different women. Melissa Deckman, a political scientist at Washington College, in Chestertown, Md., who has written about women in the Tea Party, surveyed likely female voters in the midterms this June and found that the issues most important to Republican women varied greatly from those most important to Democratic women. Democratic women ranked gender equality among their top political priorities. Republican women ranked it among the lowest, far behind terrorism, immigration and education.

The idea of rallying women to vote for women does not resonate for all women. Some commentators, in fact, have tried to tar not only Democrats but also female candidates as unacceptably extreme.

“What the G.O.P., the far right, Fox News, has done is essentially equated women in politics with the far left,” Professor Deckman said. Their message, she said, is, “if you want women in politics you’ll end up with Alexandria Ocasio-Cortez” — in a word, socialism.

But the Republican embrace of Mr. Trump’s gender-baiting has already alienated independent women as well as Republican college-educated and suburban women, polls and focus groups suggest. Even some former religious conservatives have balked.

Marybeth Glenn, a Wisconsin resident who opposed abortion and was an avid Marco Rubio supporter in 2016, said many of her relatives were upset when she denounced Mr. Trump as sexist in a viral tweetstorm in 2016. “The culture in the conservative movement places women at such a low priority,” she said. “You start to feel less of yourself. That’s the only way you can say that tax cuts are more important than the treatment of women.”

Ms. Gregory does not see it the same way. “Since he’s been president, I watched the news all the time and I’ve never been offended by anything he said about a woman,” she said of President Trump. “I think he’s not meaning it to come out the way it sounds and the way the media makes it.”

These two women disagree. Many observers of this political moment think they should join forces because they both happen to be women. We don’t know how women will vote in November. But we do know they won’t vote as one — and there’s no reason to be shocked by that."

Women Don’t Think Alike. Why Do We Think They Do? - The New York Times
Posted by John H Armwood II at 11:54 AM