Opinion | Democracy in Danger in Georgia - The New York Times 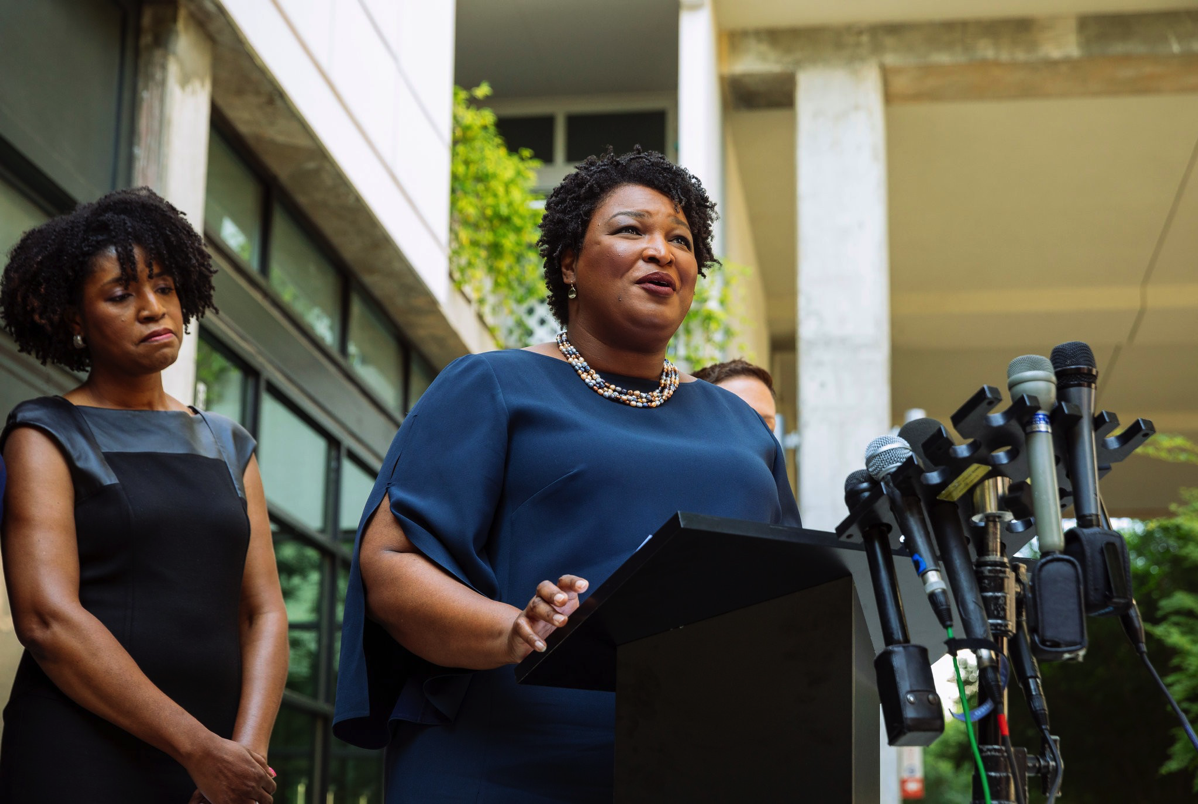 "Last year, before Stacey Abrams captured the Democratic nomination for the Georgia governor’s race, I asked her how a forthrightly progressive African-American woman could win in a Southern state that has been governed only by white men.
Her response was twofold. First, she argued that Democrats’ old strategy for winning in the South — running socially conservative white guys to try to lure former Democrats back to the party — has repeatedly failed.

At the same time, she said, Georgia, which is less than 53 percent non-Hispanic white, is full of people who would be receptive to her message, but who don’t vote, or don’t vote regularly. “There are enough Georgians who are going to see themselves, and believe in my capacity, if I can talk to them,” she told me. Among other things, she was putting resources into connecting with, and registering, rural African-Americans in the state’s south.

“We have to intentionally center voters of color from the beginning, because they are the majority of a Democratic coalition in the South, and they are certainly the majority of a Democratic coalition in Georgia,” Abrams said. She believed that, by allying with white liberals, those voters could elect a government in the old Confederacy that is responsive to their priorities. This would be more than a partisan upset — it would be a kind of revolution.

[Listen to “The Argument” podcast every Thursday morning, with Ross Douthat, Michelle Goldberg and David Leonhardt.]
At the time, I thought it would take a miracle to realize Abrams’s vision of a multiracial Southern progressive majority. But Abrams won her primary, and since then polls have showed her barely trailing the Republican nominee, Brian Kemp, the white, hard-right Georgia secretary of state. Last year, polo-shirted racists marched around Charlottesville, Va., chanting, “You will not replace us.” This year, it began to seem that in Georgia, their worst fears might be thrillingly realized.

That, however, would depend on Abrams’s supporters being permitted to vote. Kemp knows this as well as anyone; four years ago, he warned a meeting of Republicans about the New Georgia Project, a voter-registration initiative that Abrams founded while serving as Democratic minority leader in the Georgia House. “Democrats are working hard, and all these stories about them, you know, registering all these minority voters that are out there and others that are sitting on the sidelines, if they can do that, they can win these elections in November,” he said.

As secretary of state, Kemp oversees voting and voter registration rules for his own election. (He’s refused to recuse himself.) He appears to be using his position to try shape Georgia’s electorate to his advantage. According to an analysis by The Atlanta Journal-Constitution, Kemp allowed 214 voting locations — nearly 8 percent of the state’s total — to be closed in the last six years.

In part, this is because of an “exact match” voter verification program that Georgia’s Republican-controlled government enacted last year, which flags registrations that have even minor discrepancies with official records, like a dropped hyphen in a last name. The A.P. reported that almost 70 percent of the registrations that are now on hold are for African-American voters. (Kemp has blamed sloppy work by the New Georgia Project for the holds. His office told The A.P. that voters whose registrations are in limbo can cast provisional ballots.)

Kemp’s apparent attempt to rig the Georgia election shows in microcosm how democracy in America is failing. Part of the reason this country is sliding into minority rule is structural — the Senate and the Electoral College both give disproportionate power to white rural voters. But the right is also gaming the system to try to stop changing demographics from changing the country's balance of political power.

More from Michelle Goldberg on Democrats running in red states
In 2013, the Supreme Court voted by a 5-4 margin to gut the Voting Rights Act in a case called Shelby County v. Holder. Previously, jurisdictions with a history of voting discrimination had to get federal permission to change their voting procedures. By invalidating that rule, the Roberts court opened the door for Kemp and others like him to institute a new generation of Jim Crow-like restrictions on voting. And now, with the elevation of Brett Kavanaugh, the Supreme Court is poised to bless even further limits on the franchise.

On Thursday, the Lawyers’ Committee for Civil Rights Under Law filed a lawsuit against Kemp on behalf of a coalition of Georgia civil rights groups seeking an immediate end to the “exact match” program. Kristen Clarke, the group’s president and executive director, told me that were the Voting Rights Law still intact, the program would have never been adopted.
“None of these schemes or tactics or new policies would have passed the smell test,” she said, adding, “What we are seeing in Georgia is the clearest evidence that states in the South that were subject to the Voting Rights Act are moving quickly to turn the clock back in ways that harm minority voters.”

That will make it easier for Republicans to keep getting elected in these states. Once in office, they will help to put more conservative judges on the federal bench, who will make it harder still for Democrats to vote. The never-Trump conservative David Frum has written: “If conservatives become convinced that they cannot win democratically, they will not abandon conservatism. They will reject democracy.” In Georgia, they already have."

Michelle Goldberg has been an Opinion columnist since 2017. She is the author of several books about politics, religion and women’s rights, and was part of a team that won a Pulitzer Prize for public service in 2018 for reporting on workplace sexual harassment issues. @michelleinbklyn

Opinion | Democracy in Danger in Georgia - The New York Times