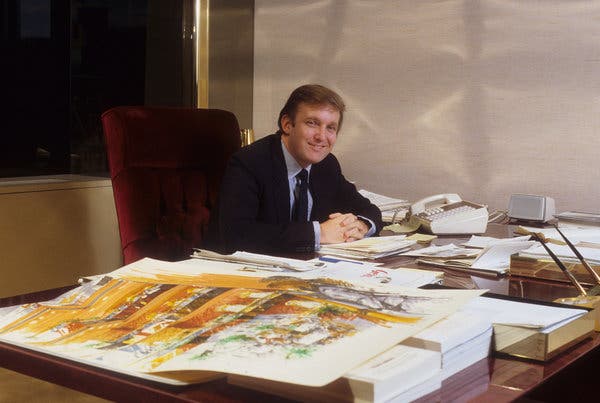 "The folk singer Woody Guthrie once wrote a song about life in an apartment owned by a particularly odious landlord whose business practices consisted of a brew of dodgy bookkeeping, race-baiting and corporate welfare: “Beach Haven ain’t my home!/No, I just can’t pay this rent!/My mo

ney’s down the drain, And my soul is badly bent!”

Beach Haven, of course, is the apartment complex built by Fred Trump, a place that Guthrie called “Trump’s Tower.” Fred Trump’s management of Beach Haven is also one example among many of the shady dealings and outright deceptions documented in the recent exposé about the Trump family’s real estate empire.

The story proved what anyone familiar with New York real estate has long known. Donald Trump is a homegrown creature, a species well known and justifiably loathed by most New Yorkers — the unscrupulous landlord. The rest of the country may be in a constant state of shock when confronted with the tornado of news that whirls around the Trump administration. But tenant advocates know what he is doing. More than a stooge for Vladimir Putin or the embodiment of a disgruntled — and mythical — white working class, Mr. Trump is at his core a landlord, turning a handsome profit while the rest of us live in increasingly precarious conditions.

As a tenant attorney, I regularly interact with landlords in the city’s housing courts. They make a killing by taking advantage of a rigged system. They extract as much wealth as possible from hardworking people trying to hang on to the places they call home, with little regard for the common good or the social fabric of our city. They take advantage of tax subsidies to renovate old buildings and construct new ones, and they engage in a range of practices, lawful and unlawful, to raise rents above the threshold beyond which tenants lose the protections of rent stabilization. And they regularly discriminate against tenants on the basis of race, language, national origin and immigration status.

Much of the outrage generated by the reporting on the Trump family’s finances has focused on tax evasion, which is immense and possibly criminal, and on the myth that Mr. Trump is a self-made man. But it is no small thing that the Trump empire is built on the same kinds of predatory practices that tenants and tenant advocates deal with every day: inflated costs for repairs, which are passed on to tenants in the form of rent increases; lax government oversight over building conditions and rent levels; and racial divisiveness.

Just as the Trump family built its wealth through price-gouging and discrimination against tenants in the complex and easily manipulated regulatory environment of New York City, the Trump administration is now engaged in a scaled-up version of the same project: tax cuts for the already wealthy, the gutting of the administrative state and a white-nationalist-inspired immigration policy.

I once represented a group of tenants in Bushwick, Brooklyn, who came home one day to find that major sections of their rent-stabilized building had been gutted. Their landlord cared little about the health and safety of his tenants — he wanted to force them out and convert the building to high-end apartments. When the residents didn’t accept the paltry buyouts he offered, he took them to court. But the tenants decided to stay and fight. They made connections with neighbors whom they barely knew. They joined a community-based organization that worked for tenants. After months of organizing, litigation and news conferences, we won, and the tenants were able to stay in their apartments, with rent abatements to compensate for the conditions they endured.

There is a long history of New York City tenants coming together to organize against landlords like the Trump family. These efforts have been most effective when tenants have constructed multiracial coalitions and have relied on tactics from rent strikes to eviction blockades to cooperative housing to strategic litigation. As we confront America’s landlord, the lesson we can draw from this history is that we must organize creatively and fight to save the place we call home.

John Whitlow is a tenant attorney and a professor at the City University of New York School of Law."