‘Davos in the Desert,’ a Saudi Prince’s Glittering Showcase, Is Stained by a Grisly Accusation - The New York Times 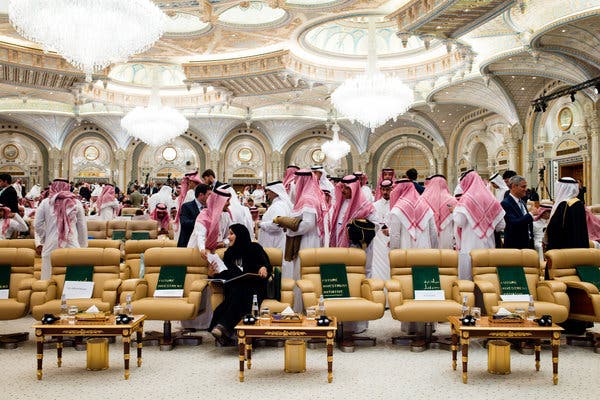 "WASHINGTON — The participants nicknamed it “Davos in the Desert,” which captures the lofty ambitions of the annual investor conference scheduled to convene in Riyadh, Saudi Arabia, this month.

Initially planned as an intimate gathering, it grew quickly in size and scope, and the inaugural meeting last year reflected the determination of its host, Crown Prince Mohammed bin Salman, to be a player on the world stage.

In keeping with Muslim practice, no alcohol was served. Waiters roamed the vast, opulent Ritz-Carlton Hotel, offering pale Saudi coffee and exotic fruit drinks. Outside the hotel, female executives kept their arms and legs covered. But the gathering was an extravagant embodiment of Crown Prince Mohammed’s dream to modernize Saudi Arabia and wean it off its reliance on oil by 2030.

Speaking on stage to the Fox Business Network anchor Maria Bartiromo, the prince said Saudi Arabia “and all of its projects and programs can reach new horizons in the world.” Then he presented his blueprint for Neom, a $500 billion planned city that would rise from the sands — a futuristic Xanadu of high-tech jobs and robot workers..."

‘Davos in the Desert,’ a Saudi Prince’s Glittering Showcase, Is Stained by a Grisly Accusation - The New York Times
Posted by John H Armwood II at 10:31 AM