Pittsburgh Unites in Grief, Even as It Splits Over Trump’s Visit - The New York Times 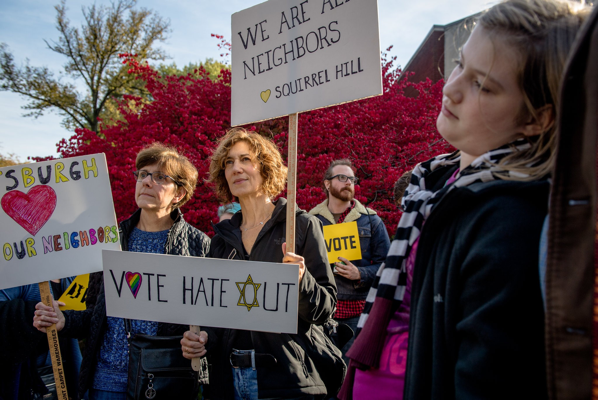 But if Mr. Trump’s visit was intended to bring healing, it instead laid bare the nation’s deep divisions. Many protesters in Pittsburgh had no doubt of what one called “the dotted line” between presidential rhetoric and violence, though some people in the city have pushed back on the idea that Mr. Trump had fomented the atmosphere of anger. As the president moved around Pittsburgh, a largely Democratic city, the signs of discord were apparent.

The protesters, some praying in Hebrew, others singing and chanting, moved around Squirrel Hill. Hoodie-wearing college students and Orthodox Jews with black hats and long beards walked alongside demonstrators carrying militant signs and middle-aged parents pushing strollers. Signs read “Words matter” and “President Hate is not welcome in our state.” As if to hold up a beloved local figure in contrast to the president, the largest march began on Beechwood Boulevard, where Mr. Rogers, the children’s television figure, used to live, and it ended at the Presbyterian church where he used to pray.

Pittsburgh Unites in Grief, Even as It Splits Over Trump’s Visit - The New York Times: