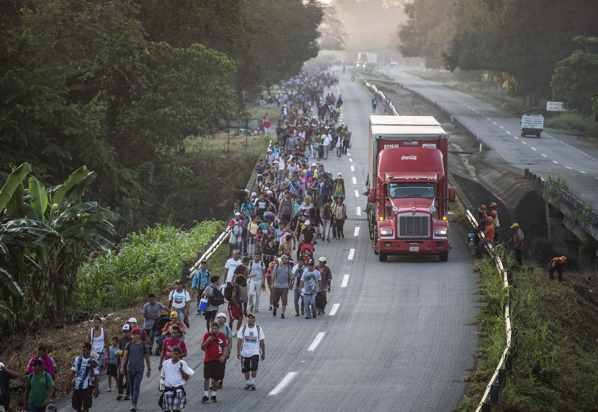 "CIUDAD HIDALGO, Mexico — The long line of men and women waded into the muddy waters of the Suchiate River. Holding onto a rope, they pulled themselves over the invisible line dividing Guatemala and Mexico. Others crossed with their babies and young children on crowded rafts built with tires.

I watched this flood of humanity on Oct. 20, and by the time the sun set, thousands had made it over the border to continue the march northward. Even more crossed in the following days, reinforcing the caravan of the desperate and determined that is shaking governments from Honduras to Washington.

Donald Trump has used the caravan — a group of thousands of Central Americans who’ve joined together to make their way toward Mexico and the United States and escape violence and desperate poverty — as a political tool. “I think the Democrats had something to do with it,” he said Monday, calling it “an assault on our country” that includes “some very bad people.”

He’s claimed “Middle Easterners” are in the group, while admitting there is no proof of this. Jim Mattis, the defense secretary, announced Thursday that he would send at least 800 troops to the southern border to block the migrants, which would prevent them from seeking asylum.
The migrant caravan is more than fodder for misleading claims and overreactions, and more than a tool to stoke voters’ fears just before midterm elections. It’s a blaring reminder that Latin America is suffering a prolonged refugee crisis that demands solutions.

The vast majority are from Honduras, although some Salvadorans, Nicaraguans and Guatemalans have joined them. Since the caravan first formed in the Honduran city of San Pedro Sula on Oct. 13, it has grown from hundreds to thousands. Its scale reflects how much Hondurans are suffering from incessant violence, political turmoil and brutal poverty.

“This is not a normal action,” declared a migrant activist, Rubén Figueroa, in the Mexican city of Tapachula. “It’s an exodus.”

The way so many have banded together — using strength in numbers as a way to defend themselves from criminals, who could kidnap them, and policemen, who could detain and deport them — is remarkable. But Mexico is the site of only one of the several swelling corridors of people fleeing their homes in the hemisphere. Costa Rica is handling thousands running from Nicaragua, where hundreds have been killed in a government crackdown on protests. Colombia, Brazil and Peru are all dealing with a huge influx of Venezuelans.

There are three distinct phenomena forcing people to move. The first is criminal violence, with murder rates at catastrophic levels, and gangs committing extortion and kidnapping. The second is a return to authoritarianism, accompanied by the use of deadly violence by security forces against those protesting autocratic rulers. The third is economic failure that has pushed people into extreme poverty. Some countries are facing all three of these at the same time.
When I interviewed members of the caravan here, many, including an 18-year-old student named Daniel Martínez, said they were running from criminals; in his case, gang members in San Pedro Sula demanded that he work for them. He knew that refusal would earn him a death sentence.

Back in June, in the Mexican city of Tenosique, I met Francis Gusmán, 32, who was disabled after being shot in the spine in the Honduran city of Yoro. Her husband and a friend had taken turns carrying her over 36 miles from the Guatemalan border to a shelter. She was in Tenosique with her 12-year-old son and 13-year-old niece, left orphaned when Ms. Gusmán’s sister was shot dead in February.

These many individual tragedies are reflected in the surging numbers looking for refugee status in Mexico. Last year, there were more than 14,000 applications — a sevenfold increase from the 2,000 in 2014. Some in the caravan say they want to stay in Mexico and seek refuge, while others say they want to go to the United States.

People who flee poverty are considered economic migrants rather than refugees. However, in some parts of Latin America the economic pressures motivating people move are extreme. In Honduras, about two-thirds of people live in poverty, which has been made worse by drought and political turmoil. In Venezuela, people have been forced to search in garbage for food.

The desperation can be seen in the caravan among the families with small children sleeping in crowded plazas. People described to me how they simply saw news of the caravan on television and, within hours, decided to join it. Many are traveling with no possessions or money. Many are wearing clothes handed out on the way. Many don’t know for sure where they’ll end up, but are simply hoping for anywhere that can offer a better life.

When it comes to the forces contributing to the refugee crisis, there are no easy solutions. Governments of the region should be meeting to discuss the refugee crisis — with, or without, the United States. Aid needs to be channeled more effectively to actually reach the poor. There must be real efforts to stop the flow of guns to the gangs terrorizing communities.

Mr. Trump’s call to turn away from internationalism hasn’t helped. But this is an issue that will go beyond his presidency. Unless the core problems are dealt with, the lines of people wading through border rivers could grow even longer."