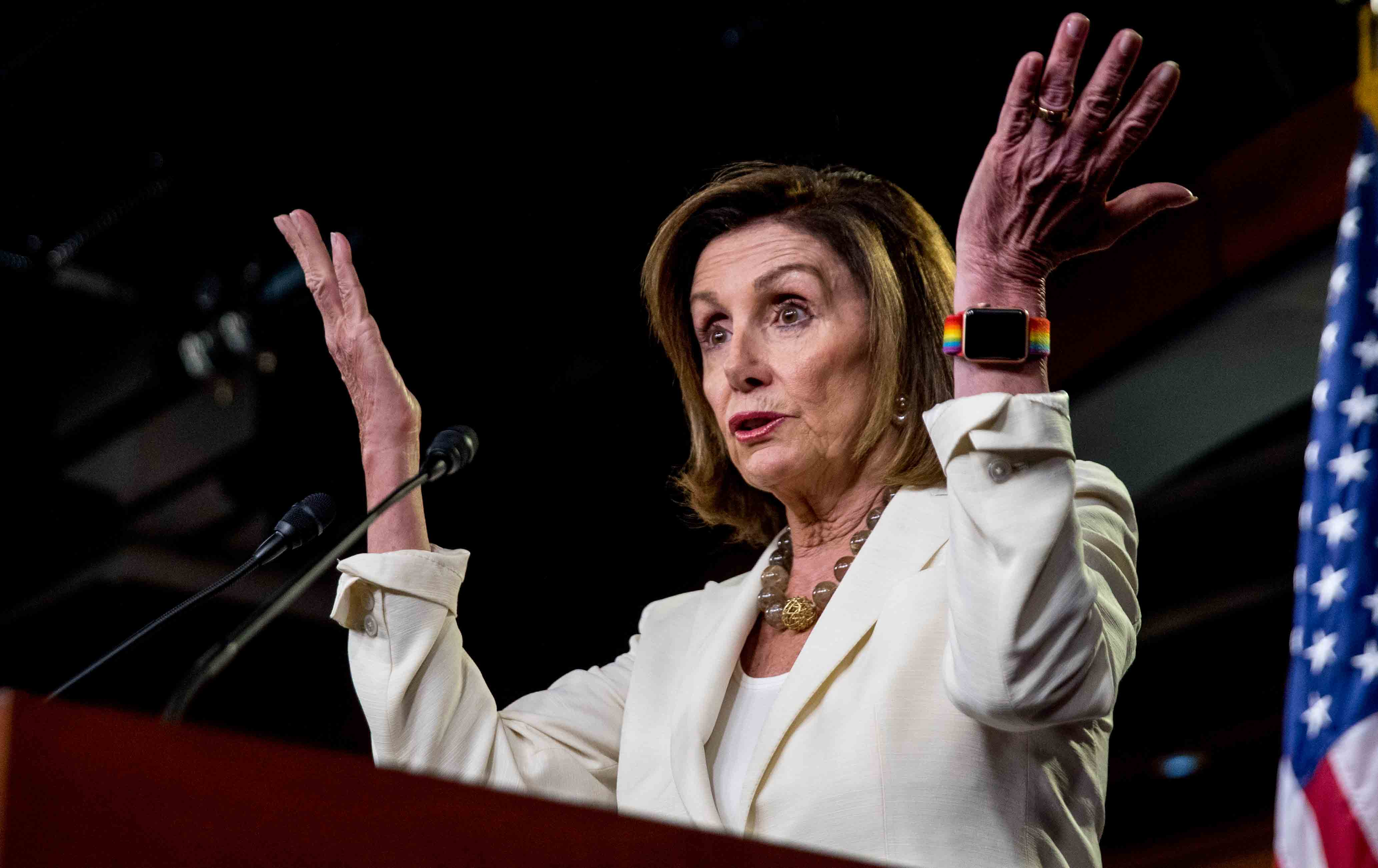 "Since regaining her position as speaker of the House earlier this year, Nancy Pelosi has been fighting a two-front war: Her lackadaisical sparring with Donald Trump has left the speaker with plenty of time and energy to take up arms against her other nemesis, the left wing of her own party. The two struggles are inseparable. Trump’s infamous go-back-to-where-you-came-from tweets targeting four Democratic congresswomen was likely provoked by a Fox & Friends segment about Democratic divisions created by the Squad (consisting of Alexandria Ocasio-Cortez, Ilhan Omar, Rashida Tlaib, and Ayanna Pressley). Trump probably saw a chance to stir up Democratic infighting with his provocative tweets.

Trump’s plan partly backfired, when Democrats united in revulsion against his racism by passing a resolution condemning his words. Yet, even in the face of Trump’s bigotry, the internecine Democratic war continued. On Thursday, the very day Trump supporters chanted “Send her back!” at a rally when the president denounced Omar, a group of moderate Democrats anonymously smeared the Squad in interviews with CNN’s Jake Tapper.

“Other House Democrats are conflicted about having to defend the Squad given things they’ve said and done,” Jake Tapper tweeted. “House Dems cited: talk of supporting challengers to incumbent Dems in primaries, AOC’s use of the term ‘concentration camps,’ anti-Semitic comments by Tlaib & Omar.” The claim that Tlaib and Omar are anti-Semites was a straight-out smear. At worst, they are guilty of inelegant phrasing when discussing the touchy issue of Israel. In making this underhanded and off-the-record accusation, moderate Democrats were giving ammunition to Trump and other right-wing bigots.

To judge by Tapper’s quotes, these moderate Democrats thought that Trump’s attack on the Squad was a smart political play. “What the president has done is politically brilliant,” one of the them said. “Pelosi was trying to marginalize these folks and the president has now identified the entire party with them.”

The moderate Democrats are right to think that Pelosi is on their side in the battle against the Squad. While the moderate Dems merely whisper in Tapper’s ears, Pelosi has made herself the public face of anti-left politics in the Democratic Party. A feud that had been simmering for months became public when members of the Squad broke rank and voted against the immigration bill Pelosi rallied Democrats to accept and which she called “our bill” (which gave the president new funding on the promise of slightly more humane treatment of detained migrants). “All these people have their public whatever and their Twitter world,” Pelosi complained to Maureen Dowd of The New York Times. “But they didn’t have any following. They’re four people and that’s how many votes they got.”

A week later, Axios published a story leaked by House Democrats that was clearly designed to damage Ocasio-Cortez. “Top Democrats are circulating a poll showing that one of the House’s most progressive members—Rep. Alexandria Ocasio-Cortez—has become a definitional face for the party with a crucial group of swing voters,” the news site reported. “These Democrats are sounding the alarm that swing voters know and dislike socialism, warning it could cost them the House and the presidency.”

The entire Axios report was nonsensical agitprop. The poll was conducted only among non-college-educated whites, a cohort that overwhelmingly voted against the Democratic Party in recent elections, even in the wave election of 2018. It’s hardly surprising that Ocasio-Cortez was unpopular among the group that is the base of the Republican Party. Axios didn’t give the name of the pollster, any information about the cross tabs or indicate if Ocasio-Cortez had been tested against other Democratic politicians like Nancy Pelosi. The article was a pure smear job, one orchestrated by Ocasio-Cortez’s enemies within the Democratic Party.

The war between Nancy Pelosi and the Squad boils down to one-word: triangulation. In the tradition of Bill Clinton, Pelosi and moderate Democrats are positioning themselves as the vital center between the radical right (Donald Trump) and the radical left (the Squad). Triangulation explains not just Democratic infighting but also Pelosi’s decision to dampen down impeachment fervor and to slow-walk (and sometimes stall) investigations into Trump and his administration.

Why has Pelosi tied herself so tightly to moderate Democrats? Greg Sargent of The Washington Post suggests that there are structural explanations. The Democratic midterm victory rested on 43 seats that lean Republican. According to Cook Partisan Voter Index (PVI), these seats are an average of 2 percent more Republican than the rest of the country. By contrast, the remaining 192 Democratic seats are on average 16 points more Democratic.

Pelosi has decided to make it a top priority to preserve the newly won Democratic seats, which means pushing her party to be much more conservative than its average voter. This has created a situation where the Squad can become national celebrities (possibly even influencing the presidential primaries) by bucking Pelosi. At the Netroots conference earlier this month, Pelosi was booed by Democratic Party activists, a crowd that cheered on the Squad.

But structural factors aren’t the only force driving the feud. Ocasio-Cortez became a star by her unexpected victory over the political machine that controls Democratic politics in New York State. Future progressive victories by left-wing candidates are likely to occur in similar circumstances, with upstarts challenging incumbents who are more conservative than their districts. The prospect of a rising left scares old-school Democrats.

Writing in HuffPost, Zach Carter suggests that machine politics is exacting revenge on Ocasio-Cortez and the Squad. “Ocasio-Cortez represents a greater threat to this machine than Trump, which is why the Democratic leadership in Congress is now diverting time, attention and resources to defend the machine’s turf, instead of focusing on the president,” Carter contends.

Regardless of her motives, Pelosi’s triangulation policy has been a disaster. Whatever merits, dubious or real, triangulation might have had in the 1990s, the policy makes little sense when Democrats confront an extremist like Trump, who needs to be fought by a united party. With triangulation, Pelosi often ends up making unnecessary concessions. As The Intercept reports, even House minority leader Chuck Schumer, hardly famous for his fighting spirit, was surprised by how much ground Pelosi ceded on the immigration bill. Moreover, the idea that moderate Democrats are somehow closer to average voters doesn’t bear scrutiny. As Eric Levitz points out in New York magazine, the Blue Dog brigade has worked to slow down or sabotage policy goals that have overwhelming popular appeal: notably, the minimum wage increase and lower prices for prescription drugs.

Pelosi often acts as if Trump were merely annoying (and perhaps a useful foil), while the Squad are the true enemies. Unless she ends her feud with the congressional left, Democrats will be marching into battle with a commander who is only halfheartedly challenging the most dangerous president in modern American history."