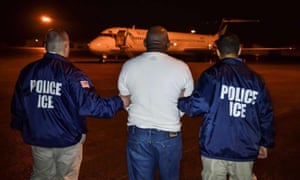 Immigration and Customs Enforcement (Ice) documents released Wednesday show how officials at the agency prepared for a set of coordinated raids in 2017 that aimed to detain more than 8,000 people for deportation. The agency officially called it “Operation Mega” and officials boasted in the documents that it would be the “largest operation of its kind in the history of ICE, targeting all aliens who are present in the United States in violation of the [law]”. Some documents also suggested field offices might have had specific arrest quotas.

The records, obtained by the immigrant rights groups Mijente and Detention Watch Network, were released the same week that the not-for-profit news organization ProPublica uncovered a secret Facebook group where Customs and Border Protection (CBP) officers posted racist, misogynistic and violent content about immigrants and Democratic members of Congress.

And their release comes as Donald Trump renewed his threat of fresh Ice raids, after calling off a coordinated action targeting undocumented immigrants across the country in late June.

The 2017 raid was ultimately canceled, after plans were leaked to the media. But the email records provide a detailed look at the broad and aggressive way Ice targets communities. The documents also offer insight into the culture of the agency, where some officers seem to talk about deportations in a celebratory, joking and excited manner.

The raids planned for September went after 8,400 “targets”. But Ice directed agents to cast a wide net, saying “all aliens amenable to removal are to be considered for arrest” and “all collaterals are on the table”, meaning people who were not the initial targets of the raids could also be arrested.

One August 2017 email appeared to show that some field offices determined arrest quotas. One official said Salt Lake City was “required to have 240 targets”, adding, “Boise can provide 50 targets, leaving 190 additional needed”. In Austin, a supervisory detention and deportation officer said the target list should include “30 total”, adding that it could be difficult to find that many targets. “To fill out to the number we are looking for”, the Austin official said, agents could expand the geographical area.

Ice made its list of targets using a “myriad of sources”, including private companies that collect personal information like license plates.

Ice agents reported successfully apprehending “collateral” people in past operations, in some cases detaining more non-targets than targets. The Philadelphia field office reported that it arrested 156 people who were not initially targeted in March 2017.

In one so-called “Operation Safe City” effort, Ice also arrested 181 people it classified as “non-criminal”, meaning while they may have lacked documentation, they had not committed any crimes.

“The way that the lists are being created is really terrifying,” Jacinta Gonzalez, a Mijente organizer, told the Guardian. “The documents show just how politically motivated these raids are … It also just shows that the emphasis is on numbers and not on safety in any way, shape or form.”

Matthew Bourke, an Ice spokesman, said the agency did not have “arrest quotas” and that operations were “not based on competition or meeting a specific threshold”.

The emails also included a range of controversial language. In one email, an Ice official said his office was “responsible for 240 targets, which is due on September 12th”, signing off with, “Happy hunting and target building!”

An assistant field office director in San Bernardino, California, who was confused about whether the operation was called “Epic” or “Mega”, wrote: “I propose we call it Operation Super Epic Mega sonic.” Someone responded that “they … changed the name to Epic!! It was Trumppped!!” Another email labeled “Fugitive Operations” celebrated the name change, saying, “It’s gonna be EPIC!”

One email exchange mocked a news article in the York Daily Record, a local Pennsylvania paper, about educating immigrants on their rights. “I’m sure the 4 people that read ydr.com, never even got to that story!” an Ice official wrote.

Another Ice official seemed enthused about the coming raids, writing in an email, “Here we go!!!!” In a July exchange about the operation and targets, a deputy field office director in Texas told one group, “You guys are crushing it,” and the recipient responded, “Thanks, guys are having fun.”

In Austin, an Ice official was enthusiastic about detentions, saying, “We had more apprehensions today than any other day during this operation. Awesome job!!”

In one August planning email, an official asked another person if they would like to be on an “arrest team” and the person responded: “YOU KNOW IT!!!!!!”

Combined with the recent report on the offensive CBP Facebook group, the new Ice records suggested systemic problems among the different agencies involved in immigration enforcement, said Gonzalez: “They have a department-wide problem … They frequently say inhumane and offensive things that are meant to dehumanize.”

Bourke, the Ice spokesman, said in an email that the agency “does not condone the use of offensive or politically-charged language in reference to agency enforcement operations”, adding that “any employee found to have acted in a manner that negatively portrays the agency … or embarrasses the agency … will be held accountable and may be subject to disciplinary measures”.

He said officers were “expected to conduct enforcement humanely, respectfully and with professionalism”, adding: “ICE operations are driven by the agency’s mission to enforce the nation’s immigration laws and to uphold national security, border security and public safety.”

The records also included an Ice presentation about immigrants’ constitutional rights, which Gonzalez said was a good reminder that communities should be informed about the laws that protect them and that people should keep pressure on the agency.