Opinion | The Bro-iness of Joe Biden - The New York Times 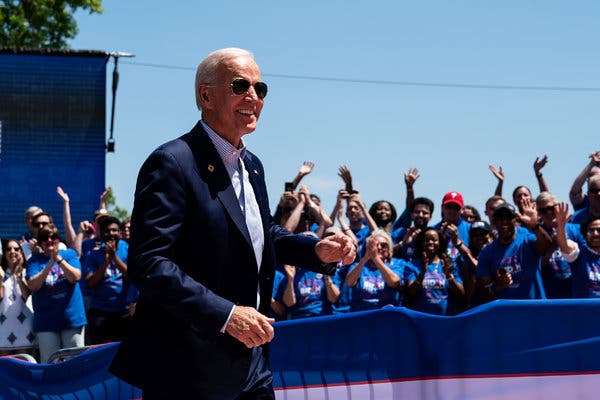 
July 7, 2019
Joe Biden has a 1960s T.V. dad quality that can sometimes be charming and  but is just as often problematic and cringe-inducing.
He is a man of a particular time whose evolution seems to be slowing. I don’t believe he’s a bad person, or a racist, or a segregationist. That’s ridiculous. I just believe that he is a man late in life who believes that he has always behaved admirably over that life. Hindsight sometimes renders a different judgment.
This is not a situation singular to Biden. Many of us, as we age, survey our lives, measure our behaviors against modern mores, and regret some actions.
But there is something about Biden that on occasion wants to resist this growth and acknowledgment. His first impulse is to get his back up and fight, rather than be empathizing and accepting. It is that thing in him, his own certitude that his motives are honorable and pure, that allows him to casually diminish or dismiss the pain people say he caused them.
In his mind, he is one of the good guys who shelved much of his privilege to fight for the oppressed. To some degree, that is true. But you can’t hold your own halo. You have to be able to see that you can still do harm when you mean well. That’s Biden’s blind spot.
He seems to have emerged from a kind of vintage bro culture in which self-righteousness and assumed altruism produces its own form of machismo — tough and touchy — that feels just a tad discordant with modern liberalism and a tad entitled.
This was on full display last week when Biden sat for an interview with CNN’s Chris Cuomo.
In some ways it was subtle, like the way he kept saying to Cuomo, “Come on, man,” to punctuate his sentences, a rhetorical device that men often use among themselves, in locker rooms and barbershops, to recognize, register and reinforce masculinity.
But in other ways it was blunt, like Biden saying of Donald Trump: “You walk behind me in a debate, come here, man.” Biden continued, “He’s the bully that used to make fun when I was a kid that I stutter, and I’d smack him in the mouth.”
This is not the first time Biden has talked about Trump in this way. Last year, at a rally hosted by a sexual assault awareness group no less, Biden said of Trump, “If we were in high school, I’d take him behind the gym and beat the hell out of him.”
This is not an admirable feature, but Biden can’t seem to see that. His worldview seems to be that self-righteousness gives license to a kind of ruffianism. That very same license has been abused throughout history.
This tough guy, “guy’s guy” sense of himself is what has caused Biden many of his problems. It informed his thinking on the disastrous 1994 crime bill he helped write and the way he discussed the bill the year before on the Senate floor, saying that “we have predators on our streets.” He said of violent criminals during that speech: “It doesn’t matter whether or not they are the victims of society.”
Biden had defended the crime bill for years, even bragging about it, but on Saturday in South Carolina, a state he’ll need to win and where the majority of Democratic primary voters are black, he again offered a partial apology, saying, “It worked, it worked in some areas. But it failed in others.”
But his first instinct is always to fight criticism rather than accept it. The dust-up over his comments about working with segregationists would have been only a flash in the pan if he’d apologized when people asked him to.
It speaks to how he handles accusations by women who said he had touched them in ways that made them uncomfortable. Rather than , he issued a video in which he said “social norms are beginning to change” and “I get it, I get it.” But  he doesn’t get it, because since then he has joked about inappropriately touching women more than once.
It informs the rough, unfair treatment of Anita Hill during the Clarence Thomas confirmation hearing before the Judiciary Committee that Biden chaired. But only this year when the campaign is gearing up, did he reach out to Hill to express his “regret,” and he told “Good Morning America”: “She did not get a fair hearing. She did not get treated well. That’s my responsibility.”
Biden still leads in the polls, and if he can maintain his lead he may well win the nomination. Biden, like the rest of the Democratic field, is better than Trump any day. Biden, like much of the Democratic field, could beat Trump.
But, none of that negates that fact that Biden has a tone and temperament issue that it would behoove him to adjust. We don’t need to replace a septuagenarian brute with a septuagenarian bro.
During the CNN interview with Cuomo, Biden bragged: “I’ve never been accused of being — not being able to spar. I’ve been accused of being too aggressive.”
Come on, man."

Opinion | The Bro-iness of Joe Biden - The New York Times
Posted by John H Armwood II at 10:36 AM