‘Nothing Prepares You for the Inhumanity of It’ 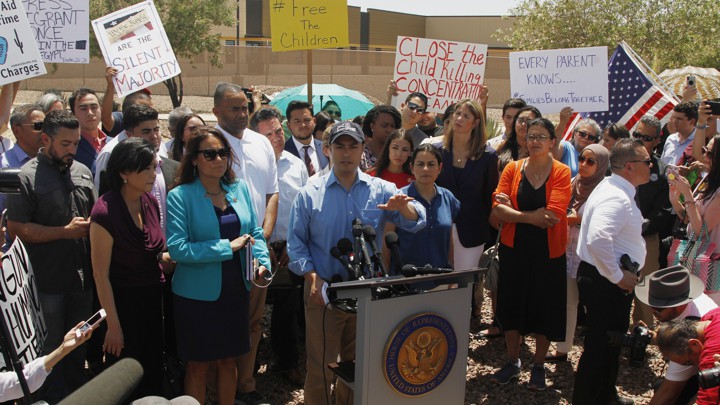 "At a visit to Border Patrol facilities this week, the freshman congresswoman Madeleine Dean of Pennsylvania met weeping women and exchanged notes with detained children.

Several United States lawmakers have used the word to describe what they saw during a visit to two Border Patrol processing centers in Texas yesterday, where they say they communicated with detained children through thick glass walls and met sobbing women who lacked access to running water.

“Nothing prepares you for the inhumanity of it,” Representative Madeleine Dean of Pennsylvania told me by phone today. Dean, a freshman Democrat and a former lawyer and professor from the Philadelphia area, was part of a crew of 14 Democratic lawmakers who visited the facilities in El Paso and Clint. The trip was organized by the Congressional Hispanic Caucus following media reports that 250 infants and children were being held in poor conditions in the latter facility, without access to enough food and water, or adequate sanitation.

The visit coincided with the release of a ProPublica story exposing a secret Facebook group for current and former Border Patrol agents, in which members joked about the deaths of migrants, posted vulgar comments and images related to Representative Alexandria Ocasio-Cortez of New York, and referred to several female members of the congressional delegation as “hoes” and “scum buckets.”

In response to the report, Carla Provost, the chief of the Border Patrol, called the posts “completely inappropriate and contrary to the honor and integrity I see—and expect—from our agents day in and day out.” But members of Congress, among others, argue that the Facebook group not only illustrates systemic problems within the agency, but also helps complete the picture of a growing humanitarian crisis at the U.S.-Mexico border.

I spoke with Dean about what she witnessed in the two Border Patrol facilities, the treatment of the immigrant detainees by agents, and what she sees as Congress’s role in addressing the situation. Our conversation has been lightly edited for length and clarity.

Elaine Godfrey: You’re not a member of the Congressional Hispanic Caucus, nor do you represent a border district. What made you want to join this delegation and tour these facilities?

Madeleine Dean: I’ve been looking for a way to get my eyes on it, to be close to it, to actually see for myself what our government is doing. I wanted to be close up to it so I could speak with some authority about the granular truth on the ground. These are human beings simply trying to find a better life, and they have been caged like either animals or very bad criminals.

I’m stunned that we have done this to children, because the lingering effects of this will be lifelong. The harm that this will do to the psyche of children in terms of trust and bonding, and just simple kindness and humanity. It’s haunting to think about. Our government has done this—not Democrats, not this majority in this Congress. This administration.

Godfrey: Can you walk me through what it was like getting into these detention facilities?

Dean: In El Paso, we were met by a tremendous number of Border Patrol [officers] and our cohort sat down at a meeting area.

Right away they said, Please leave your phones behind or give them to staff. No electronic devices in the facility. In the interest of time, no communication with the detainees at all. With that, [Representative Joaquin] Castro [of Texas] literally stood up and said, We’re members of Congress here to investigate. We expect to be able to speak to folks here.

Very quickly it came up—the grotesque reporting of the Facebook group. I told [the officers] I was quite disappointed that they would not have started [their remarks] with that. They said, That was not reflective of us—we know that it was none of the management. Of course, I don’t know how they could know that, because they claimed not to know [in the first place] about a Facebook group of 9,500 members and former employees. They said they will do an internal investigation. We assured them Congress will do its own investigation.

Godfrey: What happened next?

Dean: We walked into the facility, outside this meeting room. Picture sort of a glassed-in area where the Border Patrol folks work at stations and desks. They can look out through the glass onto the floor and into the cells where people were being held. The guards never wanted us to speak to the women [in the cells but] we went down onto the floor area, and eventually into a cell of 15 women.

They were lying on the floor in blue sleeping bags. We learned that they had been moved in there only yesterday morning. I measured the cell by way of cinder blocks: It’s 10 [blocks] by 13, an irregular shape. A concrete floor. The guards told us that they got [the sleeping bags recently] as a donation from the Forest Service. These women had been living there for 56 days, and they were mostly from Cuba. One woman pulled out of her belongings one of those [emergency blankets] which she gave me. She said, Recently, we were out in the elements in tents with just these silver blankets, no mats.

There was a prison-style toilet, stainless steel, no seat. We tried the sink above it, and there was no running water. [The women] said, Oh, yes, they told us you can drink out of the toilet—that water is clean. And they said that in their 56 days, they had been drinking out of toilets.

When we talked about the women not having water, [the guards] said, Oh, no, they can come out here and wander around and get water all they want. And the women said, No, no, no, that’s not true.

Dean: The women were worried about their own health. Two of the women have epilepsy. We talked about toothbrushes. One said, As a result of the medication I take for epilepsy, my teeth are harmed and I have very little access to toothbrushes. She revealed her teeth in terrible condition.

Another woman said, Feel my back, and on the upper portion of her back was a large lump. [The guards] said, Yeah, that’s something that needs a biopsy, but we can’t take care of that here.

Everybody was crying. One woman, 58 years old, clearly the eldest in this grouping, kept sobbing and sobbing, saying, I don’t know where my daughter is; she’s 23 years old; we were separated. Another woman seated next to her said, Two days ago, my 18-year-old daughter and I were separated from the tents; I don’t know where my daughter is. I asked the guard if they could guarantee me that they would find out exactly where these daughters are and if they would facilitate communication. He said, I know exactly where they are; I already told her—just that kind of flippant information.

I said to the women, You’re being detained here like criminals; what is your crime? The one who could speak the best English said, The crime is, I crossed the damn river. I wanted to come to America. I’m fleeing Cuba and political problems there. My family is not sure where I am. That’s the crime for which they’ve been detained 56 days.

The other thing they were worried about was retribution. They whispered to those [lawmakers] who could speak Spanish and said, We’re worried they’ll take this out on us, since we’ve spoken to you and told you about these conditions.

Godfrey: What did the women look like? What state were they in?

Dean: They were teary-eyed, if not actively crying. Many of them had cracked lips from the arid conditions and, I would assume, inadequate water. They had an affect of resignation of sitting on the floor, lying on the floor. One woman wailed; she said: We don’t mind so much being called “bitches,” but to be treated as dogs … [Our] food is sometimes spoiled or frozen—it’s not edible. She said, We are treated as animals.

Godfrey: You and several other lawmakers said on social media that the guards had treated you with hostility. What did you mean?

Dean: There was just an immediate resistance, a skepticism about why Congress was here. It was also fueled by the fact that they had a lot of explaining to do with that Facebook group and the grotesque posts, whether about people of Congress or dead children in their custody.

They didn’t want us seeing certain things. I tried to put my camera up outside at the Clint facility. They tried to block my camera.

Godfrey: When you went to the Clint facility, did you interact with the children there?

Dean: We could not open the glass doors [of the cells]. One room had six children of varying heights standing around. We were communicating through the glass. I put up a drawing—I just wrote on a paper: We heart you, we love you. [Dean began to cry.] The guard came up to me and said, What are you doing? I said, I’m just trying to express something to these children.

He said, You shouldn’t be communicating with them, and I showed him what I’d written. He said, Oh, okay.

Then one of the kids slipped a note under the door, beautifully printed. It was interpreted for me. The children wrote, How can we help you? I did sort of a fake air hug for each of the children. A guard tried to stop me from doing even something as human as that.

There was another room that appeared to be 12-, 13-, 14-year-old boys sleeping in cots. All sleeping, the lights were all on. We asked about the lighting, and [the guards] said, Well, for their safety and ours, we have to keep the lights up.

Godfrey: What happens now? What are you personally going to do now, and what do you see as Congress’s role here?

I want to shine such a spotlight on the inhumanity of this, whether it’s the children or the adults. [The goal is] that, No. 1, this administration says, We will never do this to children again. The family separation needs to end. These children need to be reunited immediately.

Then I want greater oversight. I want resources to go to these children. I want them to be shown love, compassion, care. They don’t have people there to do any of that. Mostly, I want the children reunited and the people seeking asylum to be processed in a humane, quick fashion.

Imagine. We’re coming up on the Fourth of July, and this is what is going on every single day at our border."

‘Nothing Prepares You for the Inhumanity of It’
Posted by John H Armwood II at 8:37 PM