Am I an American? 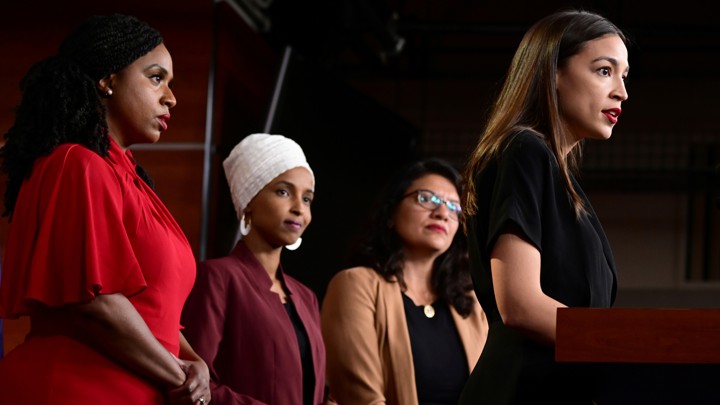 "... House Speaker Nancy Pelosi has told Representatives Ilhan Omar of Minnesota, Ayanna S. Pressley of Massachusetts, Rashida Tlaib of Michigan, and Alexandria Ocasio-Cortez of New York to get in line to be a Democrat, in the way I’m told by moderates away from Capitol Hill to get in line to be an American. I hear the moderate message of compliance, of assimilation, of being happy just dining. And I hear the message from the man with the blood-red hat defending the moderate and giving me an ultimatum.

“So interesting to see ‘Progressive’ Democrat Congresswomen, who originally came from countries whose governments are a complete and total catastrophe, the worst, most corrupt and inept anywhere in the world (if they even have a functioning government at all), now loudly and viciously telling the people of the United States, the greatest and most powerful Nation on earth, how our government is to be run,” Donald Trump tweeted Sunday. “Why don’t they go back and help fix the totally broken and crime infested places from which they came. Then come back and show us how it is done. These places need your help badly, you can’t leave fast enough.”

But Pelosi and her moderate lieutenants do not desire this type of defense, this white-nationalist brand of American exceptionalism. They quickly and rightly stood up for the Americanness of these four women. “When @realDonaldTrump tells four American Congresswomen to go back to their countries,” Pelosi tweeted, “he affirms his plan to ‘Make America Great Again’ has always been about making America white again.” They quickly and rightly classified Trump’s MAGA attack as “a racist tweet from a racist president,” as the assistant speaker of the House, Ben Ray Luján, tweeted.

But their defenses and affirmations of my Americanness—that my black, Puerto Rican, Somalian, and Palestinian sisters are indeed Americans—did little to quiet the question screaming in my soul for an answer. And I suspect in the souls of millions more.

I can’t stop the screams. Am I an American? It is a question I have never been able to answer.

I can’t stop the shouts: “Go back to your country!” It is a statement I have never been able to answer.

Is this my country? Am I an American?

Ocasio-Cortez—like Trump, like me—was born in New York City. Tlaib was born in Detroit, and Pressley in Cincinnati. Omar’s family immigrated to the U.S. from Somalia when she was a child. They are all U.S. citizens, like me.

“WE are what democracy looks like,” Pressley tweeted. “And we’re not going anywhere.”

But they are not white like the Slovene-born Melania Trump. Is an American essentially white? I do not know. I do not know if I’m still three-fifths of an American, as my ancestors were written into the U.S. Constitution. Or fully American. Or not American at all.

What I do know is that historically, people like me have only truly been all-American—if all-American is not constantly being told to “go back to your country” or “act like an American”—when we did not resist enslavement on a plantation, or in poverty, or in a prison with or without bars shackling our human potential and cultural flowering. Perhaps we were Americans when we did not resist our bodies being traded, our wombs being assaulted, and our bent backs and our hands being bloodied picking and cleaning and manufacturing white America’s wealth.

Am I an American only when I act like a slave?

What Trump told those four congresswomen is hardly unorthodox for a U.S. president if we extend recent memory backwards. In 1787, the year the U.S. Constitution was drafted, was also the year that Thomas Jefferson published his influential Notes on the State of Virginia. Enslaved Africans should be emancipated, civilized, and “colonized to such place as the circumstances of the time should render most proper,” he wrote.

Colonization emerged as the most popular solvent of the race problem before the Civil War, advocated by nearly every president from Jefferson to Abraham Lincoln. Slaveholders increasingly desired to rid the nation of the emancipated Negro. And moderate Americans increasingly advocated gradual emancipation and colonization, telling the anti-racists that immediate emancipation was impractical and impossible in the way that anti-racists are told immediate equality is impractical and impossible today.

At the founding of the American Colonization Society in 1816, Representative Henry Clay of Kentucky, the future presidential candidate and “Great Compromiser,” gave voice to what we now call Trumpism, the savaging of people of color and the countries of people of color to hold up white Americanness.

“Can there be a nobler cause that that which, whilst it proposes to rid our country of a useless and pernicious, if not dangerous portion of its population, contemplates the spreading of the arts of civilized life, and the possible redemption from ignorance and barbarism of a benighted quarter of the globe!”

The moderate strategized then, as the moderate still do now, based on what was required to soothe white sensibilities. As the clergyman Robert Finley wrote in Thoughts on the Colonization of Free Blacks in 1816, through colonization, “the evil of slavery will be diminished and in a way so gradual as to prepare the whites for the happy and progressive change.”

Some black people advocated back-to-Africa campaigns or relocated there, convinced American racism was permanent, convinced they could create a better life for themselves alongside their African kin. But many, perhaps most, black people resisted colonization schemes from their beginning. This is “the land of our nativity,” thousands of black Philadelphians resolved in 1817. Still colonization recycled through time, on the basis that the black race could never “be placed on an equality with the white race,” as Lincoln lectured a delegation of black men on August 14, 1862. The abolitionist William Lloyd Garrison corrected Lincoln: “It is not their color, but their being free, that makes their presence here intolerable.”

President Andrew Johnson did everything he could to keep us slaves. His successor, Ulysses S. Grant, tired of alienating racist Americans from the Republican Party every time he sent federal troops to defend our right to live, vote, thrive, and hold political office from Ku Klux Klansmen led by men such as Nathan Bedford Forrest, whom Tennessee honored with his own day on Saturday.

In the so-called Compromise of 1877, northerners retained the White House in exchange for allowing racist southerners to treat us like anything but Americans over the next century. Or were we Americans all along, despite what the lynchings and pogroms did to our bodies, and what Jim Crow did to our political economy? Or did we become Americans through court rulings and congressional acts in the 1940s, 1950s, and 1960s? Or were we still not Americans in 1968, when the Kerner Commission’s study of America’s racial landscape concluded, “Our nation is moving towards two societies, one black, one white—separate and unequal.”

Am I an American?

Blood-red-hatted segregationists say no, never, unless we submit to slavery. Assimilationists say we can be Americans if we stop speaking Spanish, stop wearing hijabs, cut our long hair, stop acting out against them—if we follow their gradual lead.

“I, too, am America,” Langston Hughes wrote in perhaps his most famous poem, first published in 1926.

“I’m not a Republican, nor a Democrat, nor an American—and got sense enough to know it,” Malcolm X orated at a Detroit church on April 12, 1964.

Both ring true to me. I do not know whether I’m an American. But I do know it is up to me to answer this question based on how I define American, based on how I am treated by America. I don’t care whether or not anyone thinks I am an American. I am not about persuading anyone to see how American I am. I do not write stories that show white people all the ways people of color contributed to America. I will not battle with anyone over who is an American. There is a greater battle for America.