Opinion | The Joy of Hatred 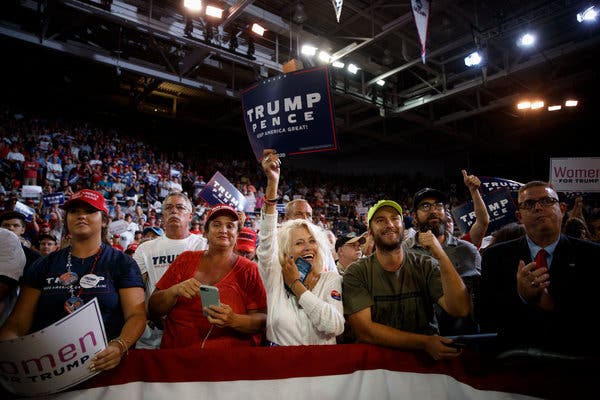 The chanting was disturbing and the anger was frightening, but what I noticed most about the president’s rally in Greenville, N.C., on Wednesday night was the pleasure of the crowd.

His voters and supporters were having fun. The “Send her back” chant directed at Representative Ilhan Omar of Minnesota was hateful but also exuberant, an expression of racist contempt and a celebration of shared values.

This dynamic wasn’t unique to the event. It’s been a part of Trump’s rallies since 2015. Both he and his crowds work from a template. He rants and spins hate-filled tirades; they revel in the transgressive atmosphere. The chants are their mutual release. Sometimes he basks in them.

To watch raucous crowds of (mostly) white Americans unite in frenzied hatred of a black woman — to watch them cast her as a cancer on the body politic and a threat to a racialized social order — is to see the worst of our past play out in modern form.

Join Jamelle Bouie as he shines a light on overlooked writing, culture and ideas from around the internet.

To be clear, the Trump rally was not a lynch mob. But watching the interplay between leader and crowd, my mind immediately went to the mass spectacles of the lynching era. There’s simply no way to understand the energy of the event — its hatred and its pleasures — without looking to our history of communal racial violence and the ways in which Americans have used racial others, whether native-born or new arrivals, as scapegoats for their lost power, low status or nonexistent prosperity. And in that period, one event stands out: an 1893 lynching in Paris, Tex., where Henry Smith, a mentally disabled black teenager, was burned alive.

The 17-year-old Smith, “generally considered a harmless, weak-minded fellow,” according to Ida B. Wells-Barnett in “The Red Record: Tabulated Statistics and Alleged Causes of Lynchings in the United States,” had been accused of the rape and murder of 3-year-old Myrtle Vance, the daughter of the local sheriff. The white community of Paris believed the murder was retaliation for an earlier arrest by the sheriff, and the accusation of rape was added, in Wells-Barnett’s words, “to inflame the public mind so that nothing less than immediate and violent death would satisfy the populace.”

On the day of the lynching, an estimated 10,000 people crowded along Paris’s main street to witness the killing. Smith was bound to a float and paraded across town in a theatrical performance meant to emphasize his guilt. The audience jeered and chanted, cursed and gave the rebel yell. “Fathers, men of social and business standing, took their children to teach them how to dispose of Negro criminals,” a witness to the event said. “Mothers were there, too, even women whose culture entitles them to be among the social and intellectual leaders of the town.” Around noon, Smith was tortured, doused with kerosene and lit ablaze, immolated for the crowd’s enjoyment.

It was part carnival, part spectacle and part ritual. Smith was accused of something greater than a mere crime. He was accused of violating a sacred moral order — of defiling the white home and white society. “In the minds of many white southerners,” the historian Amy Louise Wood writes in “Lynching and Spectacle: Witnessing Racial Violence in America, 1890—1940,” “black men came to personify the moral corruption that they believed to be the root cause of social disorder.” Lynching, then, “acted as more than a form of political terror that restored white dominance against the threat of black equality.” It also became a “divinely sanctioned retribution for black ‘sin’ that threatened not only white authority but white purity and virtue.”

In a 1933 essay, “Marxism and the Negro Problem,” W.E.B Du Bois tried, as the title suggests, to adapt the theories and analysis of Karl Marx for the American experience. “While Negro labor in America suffers because of the fundamental inequities of the whole capitalistic system,” he argued, “the lowest and most fatal degree of its suffering comes not from the capitalists but from fellow white laborers.” It is white labor, he continued, that “deprives the Negro of his right to vote, denies him education, denies him affiliation with trade unions, expels him from decent houses and neighborhoods, and heaps upon him the public insults of open color discrimination.”

Later, in his 1935 book, “Black Reconstruction in America,” Du Bois would expand on this idea, rooting white racism in a collective bargain of sorts. “It must be remembered that the white group of laborers, while they received a low wage, were compensated in part by a sort of public and psychological wage,” he wrote, outlining the ways in which this “public and psychological” wage strengthened ordinary white Americans’ attachment to a system that ultimately exploited them too:

They were admitted freely with all classes of white people to public functions, public parks, and the best schools. The police were drawn from their ranks, and the courts, dependent upon their votes, treated them with such leniency as to encourage lawlessness. Their vote selected public officials, and while this had small effect upon the economic situation, it had great effect upon their personal treatment and the deference shown them. White schoolhouses were the best in the community, and conspicuously placed, and they cost anywhere from twice to ten times as much per capita as the colored schools. The newspapers specialized on news that flattered the poor whites and almost utterly ignored the Negro except in crime and ridicule.

When this wage was threatened — by black social mobility and economic success, by black political action, by interracial contact that challenged the boundaries of caste — the response was violence. Not just as punishment but, as the lynching of Henry Smith demonstrates, as a communal defense of the existing social order. This ability to engage in state-sanctioned extrajudicial violence was both a kind of wage and a means to collect it, which tied white communities together in a shared experience of rage, righteous anger and joy.

It is important to take history on its own terms. We shouldn’t conflate the past with the present, but we should also be aware of ideas and experiences that persist through time. A political rally centered on the denunciation of a prominent black person demands reference to our history of communal, celebratory racism. It’s critical for placing the event in context, and it can help us understand the dynamic between the president and his base.

If Trump has an unbreakable bond with his supporters, it’s because he gives them permission to express their sense of siege. His rhetoric frees them from the mores and norms that keep their grievance in check. His rallies — his political carnivals — provide an opportunity to affirm their feelings in a community of like-minded individuals.

“He gets us. He’s not a politician, and he’s got a backbone,” a woman who attended a recent “Women for Trump” kickoff event in Pennsylvania told The Philadelphia Inquirer. “He’s not afraid to say what he thinks. And what he says is what the rest of us are thinking.”

Opinion | The Joy of Hatred
Posted by John H Armwood II at 1:06 AM