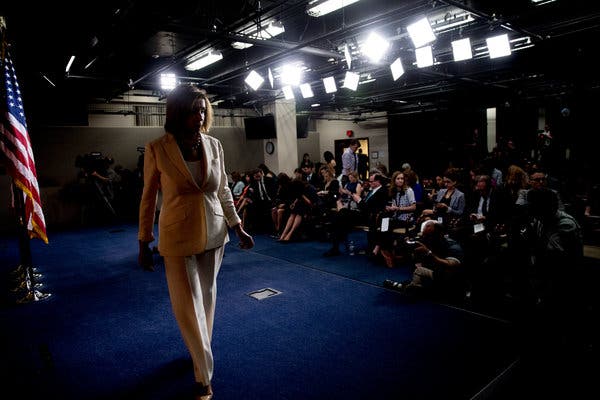 "For the last couple of weeks, the House Democratic leadership has been locked in an escalating battle with four left-wing freshmen congresswomen known as “the squad”: Alexandria Ocasio-Cortez, Ilhan Omar, Ayanna Pressley and Rashida Tlaib.

It started with a dispute over funding for detention facilities at the border, with the squad voting against any new allocations for locking up migrants. There were ugly fights on Twitter, with Ocasio-Cortez’s chief of staff comparing Democrats who voted for one funding bill to segregationist Dixiecrats. House Speaker Nancy Pelosi belittled the squad to my colleague Maureen Dowd, saying that despite “their public whatever and their Twitter world,” they’re only four people without a following in Congress.

Ocasio-Cortez accused Pelosi of bullying women of color. A senior House Democratic aide gave an anonymous quote to The Hill ripping Ocasio-Cortez as a “puppet” of “elitist white liberals” who is “only a woman of color when it’s convenient.” It’s been a mess.

Donald Trump may have momentarily smoothed over these divisions this weekend, uniting Democrats in condemnation of his racist Twitter rant against the squad. But the fissures remain, and Pelosi needs to heal them, because this fight is alienating and demoralizing people whom the Democratic Party needs.

On Saturday morning, Pressley, Tlaib, Omar and their fellow freshman congresswoman Deb Haaland spoke on a panel at Netroots Nation, an annual conference for progressives, which this year was held in Philadelphia and drew around 4,000 people. Aimee Allison, the founder of She the People, an organization devoted to mobilizing women of color, moderated.

“For millions of us, these women of color in Congress represent generations of blood, sweat and tears, of struggle for us to have representation,” Allison said in her introduction, to cheers from the audience. “They represent the best of American democracy, and yet if you’ve read the news, they’ve faced attacks all year from the right wing and from Democratic Party leadership.” At this, there were scattered boos and hisses.

When I spoke to Allison later, she argued that by slamming the squad, Democratic leaders were dampening the enthusiasm of the women of color who were working their hearts out organizing in swing states. “The way that Nancy Pelosi’s words have landed, it’s caused anger, frustration, hurt, and I believe it is damaging to the coalition we have to build in order to win the White House,” she said.

Of course, there are plenty of people who believe it’s the squad itself that threatens Democratic hopes. The rift over the foursome is part of a bigger battle over how to take on Trump. Some on the left think that Democrats can imitate Trump’s base-first strategy, winning by inspiring new and infrequent voters with an uncompromising message. Others, usually farther to the right, point out that there are simply fewer self-described liberals than self-described conservatives in this country, particularly in the states that, however unfairly, decide Electoral College victory. That means Democrats need to appeal to a putative center, even at the cost of marginalizing the left.

Pelosi appears to endorse the centrist approach, and when it comes to vote-counting in the House, it makes sense. Ocasio-Cortez’s district will be Democratic no matter what; victories in purple districts gave Democrats their majority. Nevertheless, it’s a mistake to act as if only moderate swing voters hold the key to defeating Trump.

After all, if African-American turnout in 2016 had matched 2012’s, Hillary Clinton would most likely be in the White House. The number of votes cast for the left-wing spoiler Jill Stein exceeded Trump’s margin of victory in Michigan, Wisconsin and Pennsylvania. Nine percent of people who voted for Barack Obama in 2012 voted for Trump four years later, but 7 percent of 2012 Obama voters didn’t vote at all.

You can rail at the apathy and nihilistic demands for purity of people who hate Trump’s politics but didn’t vote for Clinton — I certainly have. But it is simply a fact that leftists, as well as the generally disaffected, need to be courted just as moderates do.

These approaches aren’t mutually exclusive; Democrats probably need to balance them. But Pelosi shouldn’t be triangulating against the party’s impassioned young idealists to cultivate voters who are susceptible to right-wing demagogy. Rather than making Democrats seem more centrist, publicizing her contempt for the squad makes the party look weak and riven, and Trump, with his predator’s nose for vulnerability, has charged in to exploit the resulting discord.

Part of me understands the frustration of Democrats who find the squad maddening. Leftist criticism can be uniquely grating to liberals, especially the kind that treats disagreements over strategy as differences of morality. And some of the newcomers’ rhetoric has been stupid and irresponsible. Still, it’s Pelosi’s responsibility — not that of four insurgents who’ve been in Congress for only six months — to bring the party she leads together. She came to power with a promise to go after Trump, not the left. Maybe if she fulfilled it, Democrats would direct their rage at the president instead of at one another."