Opinion | The Immigration Crisis Is Corrupting the Nation 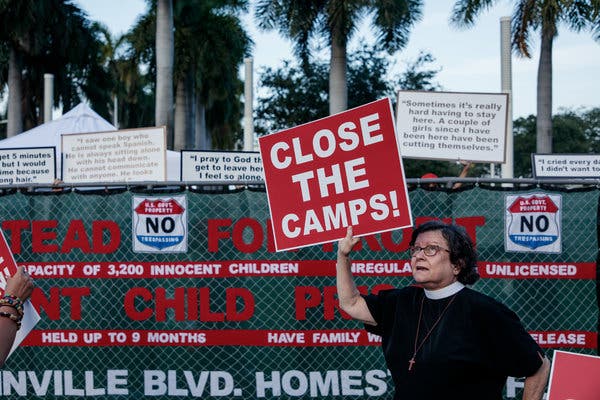 Border agents who demeaned migrants on Facebook have exacerbated a grim situation.

Last year, as part of an effort to carry out President Trump’s promise of “extreme vetting” of visitors to the United States, the Department of Homeland Security began collecting social media account information from millions of people seeking to cross the border.

That’s why the stream of posts ricocheting around a 9,500-member Facebook group, comprising current and former Border Patrol agents as well as some people with no apparent connection to the Border Patrol, is so troubling. Members of the group, as documented by ProPublica this week, “joked about the deaths of migrants, discussed throwing burritos at Latino members of Congress visiting a detention facility in Texas on Monday and posted a vulgar illustration depicting Rep. Alexandria Ocasio-Cortez engaged in oral sex with a detained migrant, according to screenshots of their postings.”

Of a 16-year-old migrant from Guatemala who died while in Border Patrol custody in May, a member of the group wrote, “If he dies, he dies.”

Customs and Border Protection said on Monday that it had informed the Department of Homeland Security’s inspector general about the posts and had started its own investigation. The National Border Patrol union decried the posts as “inappropriate and unprofessional.”

A reckoning from their superiors is due for any border agents who dishonored their uniform by spreading vileness on social media. In June, when the Plain View Project, a nonprofit research effort, released documentation on dozens of police officers from eight departments across the country posting racist, misogynist and Islamophobic material, 72 police officers in Philadelphia were pulled off the streets and the top prosecutor in St. Louis said she would no longer accept cases from 22 officers.

In a larger sense, the Border Patrol Facebook posts reveal a worrying mind-set among some of those charged with administering the harshest crackdown on migrants and asylum-seekers in decades. “These are clearly agents who are desensitized to the point of being dangerous to migrants and their co-workers,” Representative Joaquin Castro, who heads the Congressional Hispanic Caucus, told ProPublica.

The realities of that crackdown have created conditions that Americans would condemn if they were in another country.

While lawmakers refuse to compromise on emergency aid for the humanitarian needs at the border, “children are held for weeks in deplorable conditions, without access to soap, clean water, showers, clean clothing, toilets, toothbrushes, adequate nutrition or adequate sleep,” groups supporting the children wrote in a recent court filing. A judge on Friday ordered Customs and Border Protection to allow health workers into facilities where children are being held to ensure that conditions are “safe and sanitary.”

On Monday, Ms. Ocasio-Cortez toured facilities where migrants and asylum-seekers are being held. “Officers were keeping women in cells w/ no water & had told them to drink out of the toilets,” she tweeted.

As the congressional delegation arrived at one detention facility, they were heckled and cursed at by demonstrators, including one man wearing a Make America Great Again hat. (Another heckler hurled ethnic slurs at Representative Rashida Tlaib.)

Only a callous person could find mirth in the misery at the border. And only a desensitized nation could continue to permit the separation of children from their parents — and detaining all of them in atrocious conditions — as a morally acceptable form of deterrence."

Opinion | The Immigration Crisis Is Corrupting the Nation
Posted by John H Armwood II at 1:43 PM