Opinion | Why Hasn’t the Officer Who Killed Eric Garner Been Fired Yet? 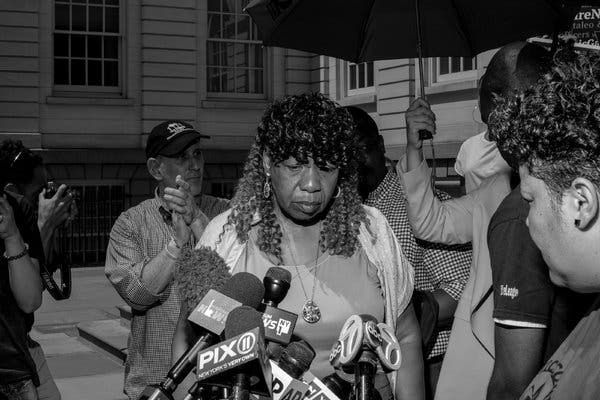 "Reason enough to hate America. America is a racist nation. There is no justice for people of color and after 400 years it is obvious there never will be in this evil land. This happened less than five miles from where I grew up.


"By The Editorial Board
On Tuesday, just one day before the statute of limitations would have run out, the Justice Department said it wouldn’t bring federal civil rights charges against the New York City police officer who put Eric Garner in a chokehold that caused a fatal asthma attack in 2014 as Mr. Garner cried, “I can’t breathe.”
A state grand jury declined to indict that officer, Daniel Pantaleo, five years ago, and as departmental disciplinary action has been delayed, he not only remains on modified duty but also received an increase in overtime pay. So far, nobody has been held accountable for Mr. Garner’s death.
After meeting with federal prosecutors, the Garner family stood outside a courthouse in Lower Manhattan, convulsing with pain.
“Y’all watched him kill my father,” Mr. Garner’s daughter Emerald Garner shouted as she stood before the cameras, her voice heavy with anger. “Fire him.”
Mayor Bill de Blasio and the Police Department delayed disciplinary action against Officer Pantaleo because the Justice Department asked them to wait while it considered whether to prosecute him. On Tuesday, the mayor said waiting so long for the Justice Department to bring charges was a mistake.
The Police Department finally began a disciplinary hearing in May, after the Civilian Complaint Review Board brought charges. An administrative judge has yet to decide whether Officer Pantaleo is guilty of departmental charges that he recklessly used a chokehold, in violation of departmental policy, and intentionally restricted Mr. Garner’s breathing.
Standing in the hot sun outside City Hall on Tuesday, Mr. Garner’s mother, Gwen Carr, implored Mr. de Blasio to fire Officer Pantaleo.
“Do your job,” she said. “Come forward and show yourself as the mayor you were elected to be.” As she spoke, Mr. de Blasio, who won election largely because of support from black New Yorkers while promising to hold the police accountable, was at Gracie Mansion, miles away.
City law seems to preclude the city from firing Officer Pantaleo until the conclusion of the hearing.
Given the facts of the case, it’s hard to see his continued employment by the Police Department as anything but an insult to the people of New York.
Mr. Garner, who was unarmed and supposedly selling loose cigarettes, which is illegal, died because Officer Pantaleo used a chokehold. The Police Department banned the use of chokeholds in 1993 amid a rise in deaths linked to the maneuver.
In searing testimony at the departmental trial this year, the medical examiner said the chokehold triggered an asthma attack that led to Mr. Garner’s death, which he ruled a homicide.
A police internal affairs investigator also testified that he recommended disciplinary charges against Officer Pantaleo in 2015. None came until last year.
While the judge will decide if Officer Pantaleo’s actions violated departmental rules, they clearly violated good sense and demonstrated the kind of overly aggressive policing that has led to many controversial deaths. He chose to escalate an encounter, involving several officers, with an unarmed man over a minor violation, then used a dangerous and banned maneuver. Video of the episode, viewed by millions, shows the officer with his arm across Mr. Garner’s throat.
Even before Mr. Garner’s death, the Civilian Complaint Review Board had substantiated four allegations of abuse against him in previous cases.
Why should an officer like Officer Pantaleo remain on the force, diminishing the trust of New Yorkers?
The Justice Department’s delay is inexcusable.
The city’s deference to federal prosecutors, and lack of urgency, are offensive.
That Officer Pantaleo could remain on the force, after everything, seems unimaginable.
Mr. Garner’s family and supporters held a press conference at City Hall on Tuesday condemning the Justice Department’s decision not to file civil rights charges in his death.Bryan Anselm for The New York Times"

Opinion | Why Hasn’t the Officer Who Killed Eric Garner Been Fired Yet?
Posted by John H Armwood II at 4:43 AM