Opinion | Robert Mueller Said All He Needed to Say 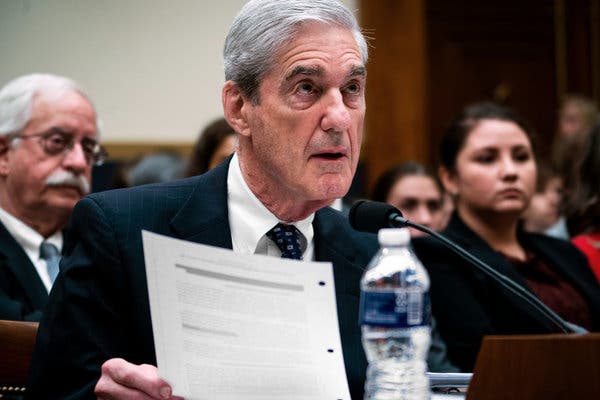 "As devastating as Robert Mueller’s report was for the president, his testimony on Wednesday — coming after months of the president’s efforts to deny the report’s realities and shut down all attempts at oversight or accountability — is worse.

From the outset, Mr. Mueller, the former special counsel, was predictably cautious and restrained, and he said very little that went beyond what was in his report. But his plain-spoken answers illuminated for Congress — and millions of Americans watching at home — the case against the president.

Several episodes stand out, all of which Democrats highlighted in their questions to Mr. Mueller at the morning hearing before the House Judiciary Committee.

First, there was President Trump’s June 2017 direction to the White House counsel, Don McGahn, to fire the special counsel in the wake of news reports that he was investigating the president for obstruction of justice — and Mr. Trump’s later insistence that Mr. McGahn create a false internal memorandum that would contradict reporting about this order.

Then there was President Trump’s instructions, in summer 2017, to his former campaign manager Corey Lewandowski, who was then a private citizen, to direct Attorney General Jeff Sessions to limit Mr. Mueller’s investigation with the intent to, as stated in the report, “prevent further investigative scrutiny of the president and his campaign’s conduct.”

More from Opinion on the Mueller Testimony

Democrats also noted Mr. Trump’s repeated instructions that Mr. Sessions “unrecuse” himself from running the investigation, which Mr. Mueller said in the report lead to a “reasonable inference” that the president wanted his attorney general to act as a shield from the investigation.

And finally, Mr. Mueller described how Mr. Trump sought, in part through his private attorneys, to influence the cooperation and testimony of several possible witnesses, including his former campaign manager Paul Manafort and his former lawyer Michael Cohen, by making public and private threats, and by floating the possibility of pardons.

These facts, starkly affirmed on Wednesday by Mr. Mueller after months of mischaracterization of his report by the president and others, are catastrophic.

Despite Mr. Mueller’s unwillingness to speculate on hypotheticals, and his adherence to the Justice Department policy against indicting a sitting president, these facts, which he also outlined in depth in his report, make clear that were Mr. Trump an ordinary person, he would have been indicted on multiple counts of obstruction of justice, as more than a thousand former federal prosecutors, free of those limitations, have observed.

Republicans did their best, during their own questions, to muddy these facts by attacking Mr. Mueller’s credibility. And of course from the beginning, Mr. Mueller was limited by a finding by the Office of Legal Counsel that a sitting president could not be indicted. And yet there is no doubt, after Wednesday, that Mr. Mueller found substantial evidence of serious and repeated criminal activity by the president. Inaction is not an option. So what next?

Wednesday’s hearings are significant because they mark the point where Congress will take up where Mr. Mueller left off; they were, effectively, the beginning of an inquiry into whether these and other abuses of power are the “high crimes and misdemeanors” that the Constitution says would merit President Trump’s impeachment and removal from office. Congress needs to continue that effort and make it official.

To call for a formal impeachment inquiry to begin is not to prejudge its outcome. It is to acknowledge that the preconditions for Congress for initiating that process have undoubtedly been met. It is also an acknowledgment that as a nation we have exhausted other avenues for accountability.

Since his inauguration, Mr. Trump has made clear that he will not abide by the normal standards of ethical and responsible government. Since Democrats took control of Congress in January, he and his administration have asserted baseless privileges and immunities to undermine ordinary forms of legislative oversight of the executive branch, attacked all attempts at review or accountability, and ignored recommendations to discipline top officials for repeatedly violating the law.

President Trump has threatened to dismantle the proposition that no person is above the law. But given what we have all now heard from Mr. Mueller, it is clear that Congress must assert itself as a constitutional protector of the rule of law.

In opening an impeachment inquiry, Congress must confront other questions that Mr. Mueller was not asked to answer — the most important of which is whether President Trump has engaged in other constitutionally repugnant abuses of power. In addition to obstruction of justice, there are at least two more, independent bases for impeachment that Congress should assess.

Just last week, newly released documents reinforced just how personally involved Mr. Trump was in an apparent criminal scheme to defraud enforcement of federal campaign finance laws related to hush money payments to women who claimed that they had affairs with him.

And from the start of his presidency, Mr. Trump has accepted profits, gains and advantages from foreign and domestic governments at properties he still owns, conduct so worrisome to the founders that they prohibited it in the Constitution’s two emoluments clauses. Their fear — that domestic and foreign governments might try to curry favor with the executive — has been realized.

The American people deserve a process that will facilitate a thorough assessment of the evidence presented and the gravity of the president’s misconduct. Far from being a distraction from Congress’s other responsibilities, checking abuses of executive powers is one of its core functions.

Mr. Trump has spent his entire presidency trying to foreclose the possibility of accountability for his misdeeds. Mr. Mueller, in his testimony on Wednesday, made clear that such a path is unacceptable. Congress must take it from here.

Noah Bookbinder (@NoahBookbinder) is the executive director of Citizens for Responsibility and Ethics in Washington."