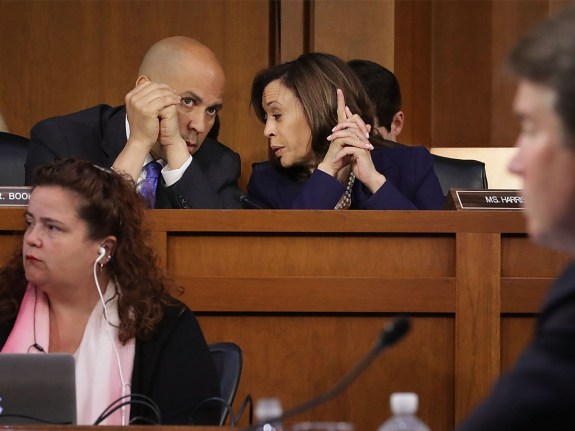 First, my main takeaway: The exchange between Booker and Cornyn seemed like the standout moment — because it was personal and tense, sure, but also because of what it demonstrates about the political moment we’re in.

Cornyn accused Booker of violating the rules of the Senate by talking about one of Kavanaugh’s past documents that had been labeled “confidential.” Cornyn even suggested that the New Jersey senator was doing so largely to promote a potential 2020 presidential campaign and warned Booker that there would be consequences to his actions.

Booker defended his move, said the process for releasing the confidential documents was a sham and basically dared Cornyn to seek any kind of punishment of Booker for violating Senate rules. “Bring it, bring it,” Booker said. (The documents were later revealed to not be confidential.)

I expect Booker to run for president in 2020, but I don’t think this moment was really about his political ambitions. The other Senate Democrats, including veteran members unlikely to seek higher office, like Dick Durbin of Illinois, chimed in to say that they agreed with Booker’s move — and that Cornyn should try to punish them too if he went after Booker.

Instead, the Booker-Cornyn exchange showed two things, in my view. For one, the younger, more partisan Democrats on the Senate Judiciary Committee — Hawaii’s Mazie Hirono, California’s Kamala Harris and Booker in particular — are pushing the party to take a more confrontational path in this nomination process, in some ways forcing less partisan, older senators (such as California’s Dianne Feinstein) to follow their lead. This is a dynamic we’ve seen in the Democratic Party at large.

Second, the Booker-Cornyn run-in, and the “confidential” documents fracas in general, is a good example of why so many scholars are worried about the state of American democracy. The Republicans, in this instance and others,1 seem to be prioritizing winning over following bipartisan procedures. In turn, this is driving Democrats to violate norms.

Looking forward, liberals are openly touting the idea of trying to increase the number of justices on the Supreme Court the next time Democrats are in power. Booker, Harris and other potential 2020 Democratic presidential candidates will likely get pressure to support such ideas. Increasingly, the very rules of politics are under constant contestation — and with two parties that think they can’t give an inch to the other."

Why Democrats Were Willing To Break The Rules On Kavanaugh Day 3 | FiveThirtyEight
Posted by John H Armwood II at 11:09 PM