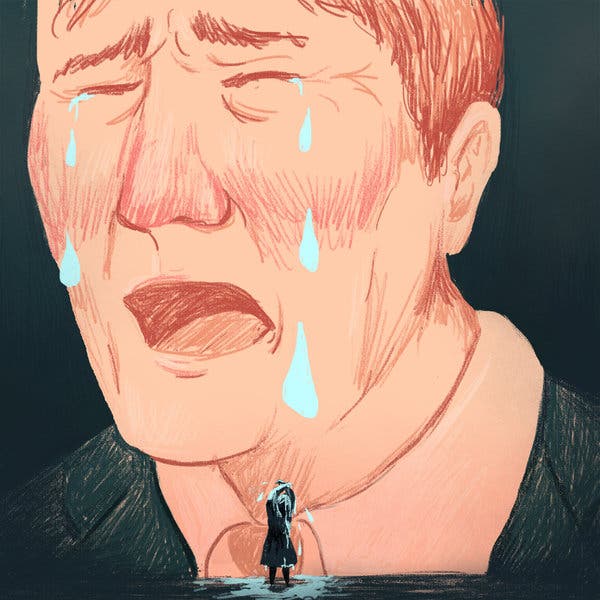 "Brett Kavanaugh is a “great gentleman,” President Trump said at a White House news conference last week. “I feel so badly for him. This is not a man who deserves this.” At no point on that occasion did Mr. Trump say the name of the woman, Christine Blasey Ford, who had accused Judge Kavanaugh of sexual assault. After further allegations about Judge Kavanaugh’s behavior were reported on Sunday night, Mr. Trump doubled down: What was going on was “most unfair” to Judge Kavanaugh, who is “an outstanding person.”

When it comes to the moral deficiencies exhibited by Mr. Trump and other supporters of the judge, many critics speak about lack of empathy as the problem. It isn’t. Mr. Trump, as he has shown clearly in the Kavanaugh confirmation process, seems to have no difficulty taking another person’s perspective, and then feeling and expressing a sympathetic or congruent moral emotion.

The real problem is that the people Mr. Trump feels with and for are most frequently powerful men who have been credibly accused of serious crimes and wrongdoing. He felt sorry for Michael Flynn, referring to him as a “good guy.” More recently, he felt bad for Paul Manafort. And, in the case of Judge Kavanaugh, Mr. Trump feels sorry for a man accused of sexual assault while erasing and dismissing the perspective of his female accusers.

Mr. Trump is manifesting what I call “himpathy” — the inappropriate and disproportionate sympathy powerful men often enjoy in cases of sexual assault, intimate partner violence, homicide and other misogynistic behavior.

There is a plethora of recent cases, from the Stanford swimmer Brock Turner to the Maryland school gunman Austin Rollins, fitting this general pattern: discussion focuses excessively on the perpetrator’s perspective, on the potential pain driving him or on the loss of his bright future. And the higher a man rises in the social hierarchy, the more himpathy he tends to attract. Thus, the bulk of our collective care, consideration, respect and nurturing attention is allotted to the most privileged in our society.

Once you learn to spot himpathy, it becomes difficult not to see it everywhere: in men such as the former editor of The New York Review of Books Ian Buruma, who published a self-indulgent essay by a former Canadian talk-show host accused of sexual assault and harassment by more than 20 women; in women like the five Republicans whom CNN convened recently to voice support for Judge Kavanaugh (“Tell me, what boy hasn’t done this in high school?” asked one, shrugging himpathetically). But we’re in a moment during which himpathy is so thoroughly on display, in such a public way, that the time is ripe to push for a mass moral reckoning.

What the Kavanaugh case has revealed this week is that himpathy can, at its most extreme, become full-blown gendered sociopathy: a pathological moral tendency to feel sorry exclusively for the alleged male perpetrator — it was too long ago; he was just a boy; it was a case of mistaken identity — while relentlessly casting suspicion upon the female accusers. It also reveals the far-ranging repercussions of this worldview: It’s no coincidence that many of those who himpathize with Judge Kavanaugh to the exclusion of Dr. Blasey are also avid abortion opponents, a position that requires a refusal to empathize with girls and women facing an unwanted pregnancy.

What makes himpathy so difficult to counter is that the mechanisms underlying it are partly moral in nature: Sympathy and empathy are pro-social moral emotions, which makes it especially hard to convince people that when they skew toward the powerful and against the vulnerable, they become a source of systemic injustice. So, for those for whom himpathy is a mental habit prompted by biased social forces, and not an entrenched moral outlook, the first step to solving the problem is simply learning to recognize when it’s at work, and to be wary of its biasing influence.

The second step to solving the problem of himpathy is listening to girls and women. Do you wonder why someone might not come forward to report sexual assault as an adolescent girl? Listen to Dr. Blasey, who told The Washington Post that at the time she was terrified that she would be in trouble if her parents realized she had been at a party where teenagers were drinking. She recalled thinking: “I’m not ever telling anyone this. This is nothing, it didn’t happen, and he didn’t rape me.” It wasn’t until years later, with the help of a therapist, that she emerged from this denial and recognized the episode as traumatic.

In other words, like many women, Dr. Blasey needed a long time to break a silence born out of society’s entrenched deference to privileged men. It’s a deference that Mr. Trump and Judge Kavanaugh’s other supporters are now demonstrating vividly.

Kate Manne is an assistant professor of philosophy at Cornell and the author of “Down Girl: The Logic of Misogyny.”