Indulging Steve Bannon is just a form of liberal narcissism. White supremacy and fascist flirtations are not ideas that need to be ‘exposed’. We just need to fight them. | Nesrine Malik | Opinion | The Guardian 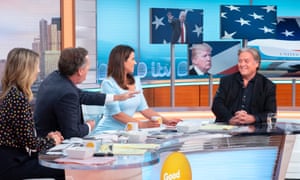 "I grew up in the long shadow of a military coup. To be a child in a country where relatives and friends suddenly disappeared, were detained indefinitely without trial, or in some instances executed, was to grow up very quickly. But the most difficult thing to process was seeing those who had lost family to the government’s brutality scramble to make peace with its members, or even join it, once it became clear the military regime was staying. It’s still a depressing thing to return to Sudan and see men who I remember as a child returning from prison gaunt and hollowed out with starvation and torture, sit among the government’s ranks, fatted, safe, and soft with power.

But it taught me an important lesson: the fate some politicians fear most is not defeat, it is irrelevance. And as the Donald Trump administration functions largely like an African dictatorship, it has been a lesson that has been helpful in shedding light on the complicity of formerly moral Republicans, and in turn, the normalisation of Trump and his associates by liberals.

Once you see relevance and proximity to power or influence as a basic motivator of elites, you cannot unsee it. When David Remnick, the editor of the New Yorker, invited Steve Bannon to headline the magazine’s Festival of Ideas, an invitation he later rescinded because he had “changed his mind”, it was not an aberration. The liberal media, so in the thrall to the power of narrative, spun Bannon’s myth before he had even properly set foot in the White House, and wrote hagiographies after.

His brief association with Trump – by all accounts a coincidental move after a peripatetic career – was written into something of far more consequence by those fascinated by a man who should have been one of their own but took the dark path, like an evil twin in a Hollywood movie. He is constantly remade, even though since he was fired he has done little but bait and agitate in culture wars. The New Yorker attributes an entire school of thought to him, and calls it “Bannonism”.

In another such outing of Bannon as a dark knight, this weekend he will be interviewed by Zanny Minton Beddoes, the Economist’s editor in chief, at the magazine’s Open Future festival. A few months ago Bannon also enjoyed a cosy interview with Lionel Barber of the Financial Times, where they traded (dull) DC war stories of Barber waiting in cafes around the White House until Bannon could come and get him. At one point Bannon says “well I’ve dealt with you before” with a sort of conspiratorial leer. The interview revealed a particular kind of rapport between them, something the French call “complicité”: a word that has a deeper meaning than the English “complicity”. It implies not only the bond of two people who are in on something the rest of us are not, but an intimate affinity based on something shared.

There is now a liberal media checklist when it comes to defending the hosting of Bannon. In a letter standing by her decision to invite him, Beddoes ticks some of them off. They want a “vibrant discussion”, a “robust argument”, not an “echo chamber”; ideas should be “tested”, a debate will “expose” bigotry and prejudice.

This is a delusion. Just as Bannon baits liberal media for his own propaganda purposes, so liberals benefit from engaging with him because he is really quite an easy person to engage. He is like a scratching pole for the Oxbridge- or Ivy League-style debaters at the helm of such establishments. They can come away from a polite joust with him having challenged racism and also having stood up to the hoard by protecting freedom of speech. To use a favourite phrase of Bannon himself, interviewing him is a perverse form of virtue signalling. To indulge him is an egotistical misreading of freedom of speech. It is about boasting liberal commitment to the value, rather than engaging with the evils that hide behind it.

This is a narcissism that many cannot afford. White supremacy, banning Muslims from entering countries and fascist flirtations are tangible issues for those not cushioned by the comforts of being of the correct race, religion or skin colour. They are not ideas that need to be “exposed”, or interrogated, or challenged. They are simply to be fought.

This is not philosophy, it is real life. But those who carry such concerns are excluded from the “robust debate” because what popular successful movements are they at the centre of? They did not campaign for Brexit, they did not put Trump in the White House, and they are not pushing back far-right gains in Europe. They are losing, and so the perceived architects of their disenfranchisement – the Nigel Farages and Steve Bannons and all the other dissimulating career nativists – will be entertained for as long as they are relevant. Even though in reality they are part-actors in the grand scheme of things, cast in a central role because that way they, and the story, sell better.

That is the real echo chamber: the one that leaves those at the sharp end of these debates out in the cold, even as they are accused of demanding a sanitised “dinner party” politics. Bannon is on the inside, because his views are seen to be successful. The echo chamber isn’t one of ideology, it is one of establishment.

It does not matter that what he stands for is essentially white nationalism, a racism that he said at a French far-right rally should be worn “as a badge of honour”. All that is relevant is that he is relevant, that he has become someone of consequence due to his brush with power, and seems to be at the centre of something that, in the words of Beddoes, “worryingly large numbers of people are drawn to”. And so that is the benchmark for what constitutes something worth entertaining and validating via prestigious invitations to intellectual festivals. Bannon will not be a rogue element, invited to be challenged and exposed. He will be among his people, fatted, safe, and soft with power.

• Nesrine Malik is a Guardian columnist"

Indulging Steve Bannon is just a form of liberal narcissism | Nesrine Malik | Opinion | The Guardian
Posted by John H Armwood II at 7:58 AM