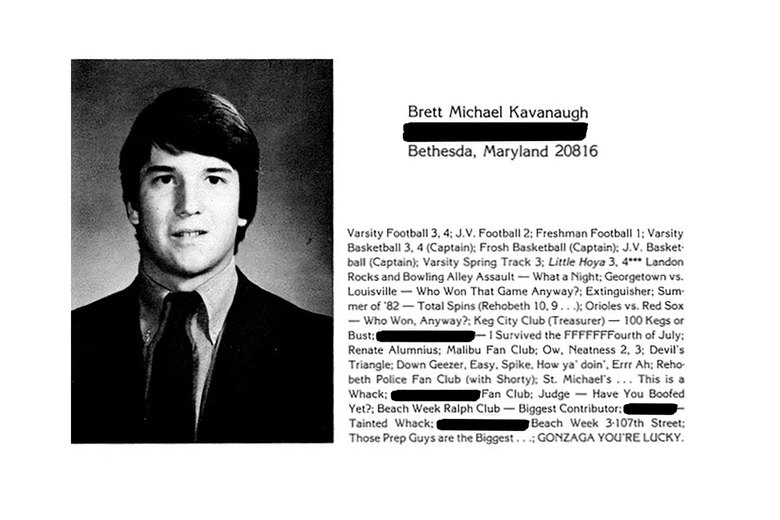 For what it’s worth, and absent evidence or allegations to the contrary, I believe Brett Kavanaugh’s claim that he was a virgin through his teens. I believe it in part because it squares with some of the oddities I’ve had a hard time understanding about his alleged behavior: namely, that both allegations are strikingly different from other high-profile stories the past year, most of which feature a man and a woman alone. And yet both the Kavanaugh accusations share certain features: There is no penetrative sex, there are always male onlookers, and, most importantly, there’s laughter. In each case the other men—not the woman—seem to be Kavanaugh’s true intended audience. In each story, the cruel and bizarre act the woman describes—restraining Christine Blasey Ford and attempting to remove her clothes in her allegation, and in Deborah Ramirez’s, putting his penis in front of her face—seems to have been done in the clumsy and even manic pursuit of male approval. Even Kavanaugh’s now-notorious yearbook page, with its references to the “100 kegs or bust” and the like, seems less like an honest reflection of a fun guy than a representation of a try-hard willing to say or do anything as long as his bros think he’s cool. In other words: The awful things Kavanaugh allegedly did only imperfectly correlate to the familiar frame of sexual desire run amok; they appear to more easily fit into a different category—a toxic homosociality—that involves males wooing other males over the comedy of being cruel to women.