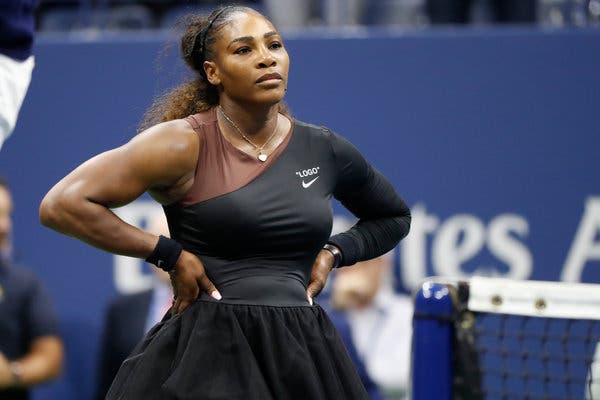 "Rather than remain silent, she insisted on being heard. Rather than contain herself, she used her rage for the countless women silenced by sexism and racism.

Serena Williams at the United States Open on Saturday, when she accused the chair umpire of sexism. "Her rage was for the countless women silenced by sexist discrimination, not a simple pleading for herself," Salamishah Tillet writes.

I’ve never booed so loudly in my life. I was standing in Arthur Ashe Stadium on Saturday at the women’s finals of the United States Open, and I barely could hear Serena Williams. She was protesting an unjust and unnecessary penalty that the chair umpire issued.

“This has happened to me too many times,” she said. “This is not fair.”

Williams’s vexed relationship with umpires at the tournament is well documented. Even so, I knew I was also watching another history unfold, a quietly revolutionary one.

Williams had liberated herself of constraint. Rather than swallow her frustrations in the face of discrimination, Williams fought back and reminded the world of her greatness. In doing so, she gave her 20-year-old vanquisher, Naomi Osaka, an even bigger victory: the right to be angry and black and a woman — on and off the court. Her rage was for the countless women silenced by sexist discrimination, not a simple pleading for herself.

But too few people saw it that way. Many critics have simply ignored or trivialized those earlier disputed calls, which are essential context for understanding her anger. Even more egregious, Williams was the subject of an outrageous racist caricature in an Australian newspaper, The Herald Sun.

The cartoonist, Mark Knight, defended the image of Williams stomping on her racket with her pony tail standing upright, her features exaggerated so she looked like a monster. “Don’t bring gender into it when it’s all about behavior,” he tweeted, to which my former colleague, the historian Martha S. Jones, aptly responded that the image is a direct descendant of the racist caricatures of the 19th-century illustrator Edward W. Clay.

After the match, I commiserated with my black female friends. My sister told me she was afraid for Williams because she knew too well how easily black women’s expressions of rage could be turned against them.

In her defiance and dismay, we saw ourselves: women who play by the rules, exceed professional expectations, and yet, still find ourselves constrained by the Angry Black Woman stereotype, in which African-American women are portrayed as overly aggressive, impulsive, physically threatening and ultimately, less than human.

I’ve spent most of my adulthood running away from this cliché, opting to speak in measured tones when a white male colleague viciously spread false rumors about me or swallowing my voice when another colleague yelled at me in a faculty meeting.

By doing so, I became a far more unrecognized statistic: Studies show that black women are less likely than other groups to express anger in situations in which they are being treated unfairly.

The mounting condemnation of Williams proves that the myth of the Angry Black Woman does not simply deny black women the opportunity to express our full range of human emotions, including frustration. It also serves as a double punishment when we speak out against those injustices aimed at other people and ourselves.

Even as a child I worried about the effects of the Angry Black Woman stereotype. When my mother fought back as my stepfather pummeled her with his fists, I was afraid that she’d be locked up for protecting herself.

This caricature has severe legal consequences for African-American women. According to the sociologist Beth Ritchie, black women are more likely than white victims of domestic violence to be arrested when they call the police to report their abuse or be charged with domestic violence for defending themselves against their assailant.

I’d later learn through my involvement with the National Clearinghouse for the Defense of Battered Women that when black women kill or injure their assailant in an act of self-defense, they are usually more harshly treated than a white woman accused of the same crime.

Since the match, Williams has been criticized for making her disputes personal or not waiting until the postgame news conference to call out the umpire’s sexism. I even saw a TV pundit position Colin Kaepernick’s dissent as more respectable and hers as a failure of character.

Williams did break rules that day, but the most important ones were not rules of tennis. Rather than remain silent, she insisted on being heard. Rather than contain herself, she used her rage strategically and politically.

She later said, “I just feel like the fact that I have to go through this is just an example for the next person that has emotions, and that want to express themselves.”

She went on: “They’re going to be allowed to do that because of today. Maybe it didn’t work out for me, but it’s going to work out for the next person.”

In doing so, she opened new possibilities of black womanhood not just for Naomi Osaka, but also for my daughter and the millions of black girls and women who have watched how Williams has always been the target of policing over her hairstyle, tennis outfits and body shape, and recognize that she has been forced to be a permanent outsider in a sport over which she has long reigned.

Salamishah Tillet (@salamishah) is a professor of African-American and African studies and creative writing at Rutgers University, Newark. She is a co-founder of A Long Walk Home, a nonprofit that uses art to empower young people and end violence against girls and women."

Opinion | Serena Williams’s Gift to Naomi Osaka, and Women, at the U.S. Open - The New York Times
Posted by John H Armwood II at 7:27 AM