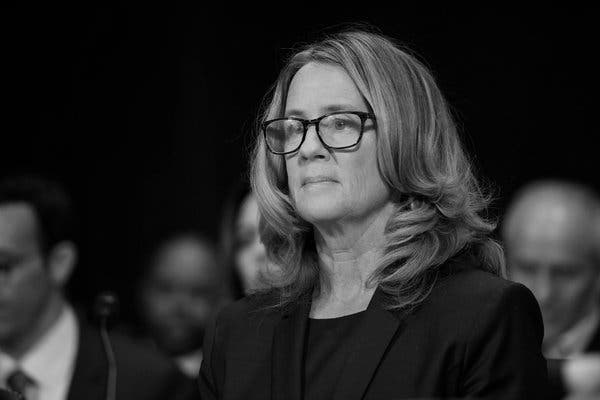 "What a study in contrasts: Where Christine Blasey Ford was calm and dignified, Brett Kavanaugh was volatile and belligerent; where she was eager to respond fully to every questioner, and kept worrying whether she was being “helpful” enough, he was openly contemptuous of several senators; most important, where she was credible and unshakable at every point in her testimony, he was at some points evasive, and some of his answers strained credulity.

Indeed, Dr. Blasey’s testimony before the Senate Judiciary Committee on Thursday was devastating.

With the eyes of the nation on her, Dr. Blasey recounted an appalling trauma. When she was 15 years old, she said, she was sexually assaulted by Judge Kavanaugh, then a 17-year-old student at a nearby high school and now President Trump’s nominee to the Supreme Court.

Her description of the attack, which she said occurred in a suburban Maryland home on a summer night in 1982, was gut-wrenchingly specific. She said Judge Kavanaugh and his friend, Mark Judge, both of whom she described as very drunk, locked her in a second-floor room of a private home. She said Kavanaugh jumped on top of her, groped her, tried to remove her clothes and put his hand over her mouth to keep her from screaming. She said she feared he might accidentally kill her.

“The uproarious laughter between the two and their having fun at my expense,” she said, was her strongest memory. 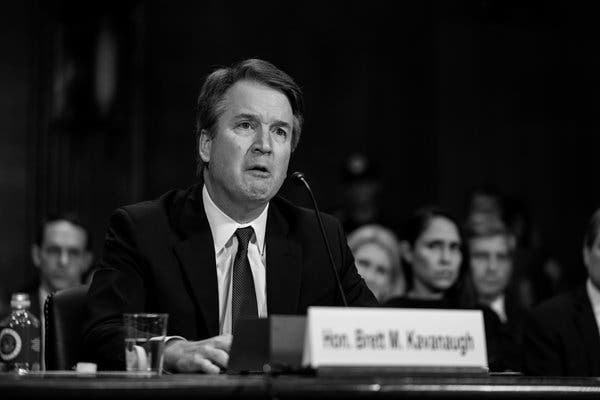 Judge Kavanaugh, when it was his turn, was not laughing. He was yelling. He spent more than half an hour raging against Senate Democrats and the “Left” for “totally and permanently” destroying his name, his career, his family, his life. He called his confirmation process a “national disgrace.”

“You may defeat me in the final vote, but you will never get me to quit,” Judge Kavanaugh said, sounding like someone who suddenly doubted his confirmation to the Supreme Court — an outcome that seemed preordained only a couple of weeks ago.

Judge Kavanaugh’s defiant fury might be understandable coming from someone who believes himself innocent of the grotesque charges he’s facing. Yet it was also evidence of an unsettling temperament in a man trying to persuade the nation of his judicial demeanor.

We share the sorrow of every sensible American who feels stricken at the partisan spectacle playing out in Washington. Judge Kavanaugh was doubtless — and lamentably — correct in predicting that after this confirmation fight, however it ends, the bitterness is only likely to grow. As he put it in his testimony, “What goes around, comes around,” in the partisan vortex that has been intensifying in Washington for decades now. His open contempt for the Democrats on the committee also raised further questions about his own fair-mindedness, and it served as a reminder of his decades as a Republican warrior who would take no prisoners.

Judge Kavanaugh’s biggest problem was not his demeanor but his credibility, which has been called in question on multiple issues for more than a decade, and has been an issue again throughout his Supreme Court confirmation process.

On Thursday, he gave misleading answers to questions about seemingly small matters — sharpening doubts about his honesty about far more significant ones. He gave coy answers when pressed about what was clearly a sexual innuendo in his high-school yearbook. He insisted over and over that others Dr. Blasey named as attending the gathering had “said it didn’t happen,” when in fact at least two of them have said only that they don’t recall it — and one of them told a reporter that she believes Dr. Blasey.

Judge Kavanaugh clumsily dodged a number of times when senators asked him about his drinking habits. When Senator Amy Klobuchar gently pressed him about whether he’d ever blacked out from drinking, he at first wouldn’t reply directly. “I don’t know, have you?” he replied — a condescending and dismissive response to the legitimate exercise of a senator’s duty of advise and consent. (Later, after a break in the hearing, he apologized.)

Judge Kavanaugh gave categorical denials a number of times, including, at other points, that he’d ever blacked out from too much drinking. Given numerous reports now of his heavy drinking in college, such a blanket denial is hard to believe.

In contrast, Dr. Blasey bolstered her credibility not only by describing in harrowing detail what she did remember, but by being honest about what she didn’t — like the exact date of the gathering, or the address of the house where it occurred. As she pointed out, the precise details of a trauma get burned into the brain and stay there long after less relevant details fade away.

She was also honest about her ambivalence in coming forward. “I am terrified,” she told the senators in her opening remarks. And then there’s the fact that she gains nothing by coming forward. She is in hiding now with her family in the face of death threats.

Perhaps the most maddening part of Thursday’s hearing was the cowardice of the committee’s 11 Republicans, all of them men, and none of them, apparently, capable of asking Dr. Blasey a single question. They farmed that task out to a sex-crimes prosecutor named Rachel Mitchell, who tried unsuccessfully in five-minute increments to poke holes in Dr. Blasey’s story.

Eventually, as Judge Kavanaugh testified, the Republican senators ventured out from behind their shield. Doubtless seeking to ape President’s Trump style and win his approval, they began competing with each other to make the most ferocious denunciation of their Democratic colleagues and the most heartfelt declaration of sympathy for Judge Kavanaugh, in a show of empathy far keener than they managed to muster for Dr. Blasey.

Pressed over and over by Democratic senators, Judge Kavanaugh never could come up with a clear answer for why he wouldn’t also want a fair, neutral F.B.I. investigation into the allegations against him — the kind of investigation the agency routinely performs, and that Dr. Blasey has called for. At one point, though, he acknowledged that it was common sense to put some questions to other potential witnesses besides him.

When Senator Patrick Leahy asked whether the judge was the inspiration for a hard-drinking character named Bart O’Kavanaugh in a memoir about teenage alcoholism by Mr. Judge, Judge Kavanaugh replied, “You'd have to ask him.”

Asking Mr. Judge would be a great idea. Unfortunately he’s hiding out in a Delaware beach town and Senate Republicans are refusing to subpoena him.

Why? Mr. Judge is the key witness in Dr. Blasey’s allegation. He has said he has no recollection of the party or of any assault. But he hasn’t faced live questioning to test his own memory and credibility. And Dr. Blasey is far from alone in describing Judge Kavanaugh and Mr. Judge as heavy drinkers; several of Judge Kavanaugh’s college classmates have said the same.

None of these people have been called to testify before the Senate. President Trump has refused to call on the F.B.I. to look into the multiple allegations that have been leveled against the judge in the past two weeks. Instead the Republican majority on the committee has scheduled a vote for Friday morning.

There is no reason the committee needs to hold this vote before the F.B.I. can do a proper investigation, and Mr. Judge and possibly other witnesses can be called to testify under oath. The Senate, and the American people, need to know the truth, or as close an approximation as possible, before deciding whether Judge Kavanaugh should get a lifetime seat on the nation’s highest court. If the committee will not make a more serious effort, the only choice for senators seeking to protect the credibility of the Supreme Court will be to vote no."