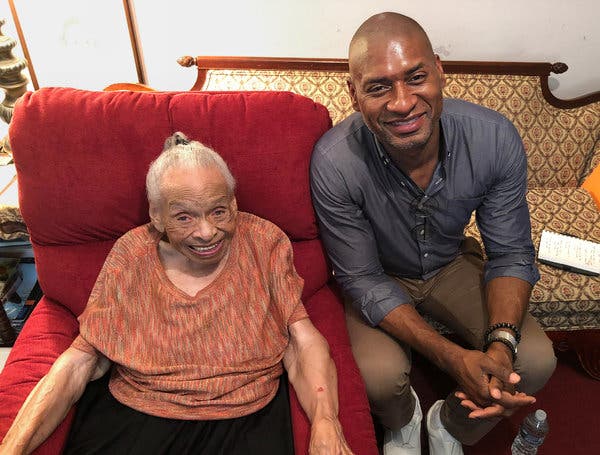 "On Wednesday afternoon, I traveled to the charming but unassuming neighborhood of Juniper Hill in White Plains to speak with a living legend too few people know about.
Her name is Olivia J. Hooker, and she is a sharp and glorious 103 years old. Not only was she the first African-American women to join the Coast Guard, not only was she a psychology professor and activist, but she is one of the last known survivors of the Tulsa Race Riot of 1921. During the riot, white residents destroyed the prosperous black neighborhood of Greenwood, which had come to be known as “Black Wall Street.” A report by the Oklahoma Commission to Study the Tulsa Race Riot said, “It is estimated that approximately 11,000 blacks resided in Tulsa in 1921, most living in the area of the Greenwood section.” As many as 300 people were killed and 8,000 left homeless.
As The New York Times wrote in 2011 on the 90th anniversary, the Tulsa riot “may be the deadliest occurrence of racial violence in United States history.” And yet, as the Tulsa Historical Society and Museum points out, not one act of violence that occurred that day “was then or ever has been prosecuted or punished by government at any level: municipal, county, state, or federal.”
There was no news peg for my conversation with Dr. Hooker, no milestone, no major anniversary, but it is my philosophy that when life affords you the opportunity to sit at the elbow of a historical figure who has lived through things you’ve only read about, you take it.
Dr. Olivia J. Hooker with the author.

So I entered Hooker’s home and locked eyes with her, as a broad smile pushed up her cheeks. Her small body lay almost enveloped by the cushions of a large red recliner.

Shortly after I arrived, she began to speak, recalling an awesome story of a terrible time.

Hooker grew up in a happy house with three sisters and one brother — she was the fourth child — her parents and a grandmother. Their house was a small, five-room cottage, white with green trim, in Greenwood.

Her father owned a department store that carried his name, Samuel D. Hooker. “My daddy only had first-class stock,” Hooker related with a smile and a hint of pride.

She described an idyllic life of school, visits to the grocery store whenever she had two pennies, and her fear of the trolley that ran through town.

But that was all ripped apart one day in her sixth summer, when Greenwood erupted.

White men broke into their house as Hooker and some of her siblings hid beneath an oak dining table, draped with a tablecloth.

“They took a hatchet to my sisters’ piano. They poured oil all over my grandmother’s bed.” They “stuffed the dresser” with ammunition, Hooker told me. Maybe they had intended to burn or destroy the house, but they didn’t.

She continued, “They took all the beautiful biscuits out of the oven and threw them out in the mud.” We both managed a laugh.

They broke the phonograph and the Enrico Caruso records her mother had received as a gift from a friend who had gone to study in Heidelberg, Germany.

“They didn’t appreciate you having anything classical,” Hooker said. “They took all the silverware that Momma had just got for Christmas, coffee pot, teapot — you know, that kind of beautiful stuff. If anything looked precious, they took it.”

Hooker told me that after the men left the house, “The militia sent folks down to talk to my mother. She said: ‘Why are you shooting the victims? Why don’t you shoot the aggressors?’” A militiaman responded: “We can’t do that. How can we do that?”

“This is how you do it,” said Hooker’s mother, turning a musket on the men. Hooker told me that her mother had been to Tuskegee Institute and that a boyfriend at the time was a militiaman who had told her that women should learn self-defense. He had taught her many of the things he knew, including how to shoot.

When Hooker’s mother turned the gun on the white men, the militiaman yelled at her, “You have to get these children to a safe place!” She replied, “I had a safe place!”

People think that the horror of America’s racial history is an unfortunate episode among ancestors, but it is not. The civil rights movement was only 50 years ago. The Tulsa riot was less than 100 years ago. People alive today still carry that weight, still manage that trauma, still hide those scars.

American history is full of stories of black people doing precisely what America says it wants of its citizens — being creative, enterprising and industrious, being self-respecting and self-sufficient — only to have white people destroy what they’ve built, impede their progress and erase their wealth. And those are not far-off stories: Those are also the stories of the living.

I look at it this way: Dr. Hooker’s life has overlapped with that of my grandparents, my parents, my kids and me. So, too, must the lives of some of the men who destroyed this black neighborhood, the ones who burst into the small white and green Hooker house looking to loot “precious” things.

What impact did this have on Hooker and those she influenced? What impact did it have on the rioters and those they influenced? History doesn’t stay stuck in the time that it happens. That is only where it is born, after which it is alive and moving with us through time and space.

In the immediate aftermath of the riots, Hooker was traumatized.

The community was decimated. “All of the schools where black people could go to were destroyed,” she told me. As Hooker tells it, they were bombed from the air using crop dusters. Her father’s store, with its Arrow shirts and Edison hats, had been emptied by looters.

Her mother moved with the children to Topeka, Kan., so they could go to school, while her father stayed behind to try to rebuild his business.

“I used to scream at night. I didn’t sleep. I had nightmares,” she said. Dr. Hooker was so traumatized that when her mother sought medical advice about what to do with her sleepless child, she was told to keep her home from school, which she did for a while.

Think about what this kind of trauma (or our modern versions, in the form of things like televised state violence or mass family separation and internment) does to a child’s — a person’s — sense of trust and belonging.

Hooker said it made her question her sense of belonging in this country, as well as the patriotic songs she had learned as a child. “All the beautiful songs, well, I had believed them.”

Hooker said her mother told her, “We are citizens, but they don’t respect us.”

“My family had never told me about hate,” said Hooker. “I didn’t know what that was.” She told me: “All of the nonblack people I had seen had been gentle and nice, laughing with us children and listening to my sister play the piano, because they wanted to sell my father their wares. I thought that was the nature of whites.”

As Hooker put it, “It took years for me to get over the shock of seeing people be so horrible to people who had done them no wrong.”

That to me was Hooker’s great lesson about Tulsa: that racism and racial violence is shocking and haunting and you carry it with you, both communally and individually, in blunt injury and in excruciating detail, down to the image of the beautiful biscuits being tossed in the mud."