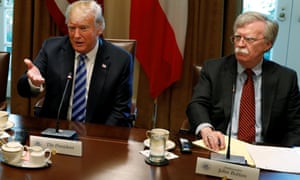 "John Bolton, the hawkish US national security adviser, will threaten the international criminal court (ICC) with sanctions when he makes an excoriating attack on the institution in a speech in Washington.

According to drafts of his speech, Bolton will push for sanctions over an ICC investigation into alleged American war crimes in Afghanistan. He is also expected to announce on Monday the closure of the Palestine Liberation Organization (PLO) office in Washington because of its calls for an ICC inquiry into Israel.

“The United States will use any means necessary to protect our citizens and those of our allies from unjust prosecution by this illegitimate court,” Bolton will say, according to a draft of his speech seen by Reuters.

“The United States will always stand with our friend and ally, Israel,” the draft text continues. It says the Trump administration “will fight back” if the ICC formally proceeds with opening an investigation into alleged war crimes committed by US military and intelligence staff during the war in Afghanistan.

Who is John Bolton?

Bolton is expected to propose that the Trump administration bans ICC judges and prosecutors from entering the US, impose sanctions on any funds they have in the States and prosecute them in the American court system.

He will also suggest that the US negotiates more binding, bilateral agreements to prohibit countries from surrendering Americans to the court in The Hague.

The ICC did not respond immediately to advance reports of the speech, but the senior Palestinian negotiator Saeb Erekat confirmed that a US official had notified the Palestinian leadership that its diplomatic mission in Washington DC would be closed.

The move follows a year of US action seen as detrimental to Palestinians, most recently the slashing of hundreds of millions of dollars in humanitarian assistance. Trump has said the cuts were to pressure the Palestinians to make a peace deal, although his administration has not announced any specific efforts.

Erekat said: “This is yet another affirmation of the Trump administration’s policy to collectively punish the Palestinian people.” He added that Palestinian authorities were taking “necessary measures to protect the rights of our citizens living in the United States to access their consular services”.

“We reiterate that the rights of the Palestinian people are not for sale, that we will not succumb to US threats and bullying and that we will continue our legitimate struggle for freedom, justice, and independence, including by all political and legal means possible,” he said.

The UN-backed court’s remit is to bring to justice the perpetrators of war crimes, crimes against humanity and genocide. The US did not ratify the Rome treaty that established the ICC in 2002. The then president George W Bush was strongly opposed to the court. President Barack Obama subsequently took measures to improve cooperation with the organisation.

“We will consider taking steps in the UN security council to constrain the court’s sweeping powers, including to ensure that the ICC does not exercise jurisdiction over Americans and the nationals of our allies that have not ratified the Rome statute,” Bolton’s draft text says.

In May, Trump opened a US embassy to Israel in Jerusalem, ending decades of consensus that the contested city’s status should be decided in future negotiations, as Palestinians claim its eastern parts while Israel claims the entire city as its capital.

The embassy opening prompted the Palestinian president, Mahmoud Abbas, to reject Washington’s traditional role as a mediator, recalling his envoy to the US and stopping communication.

Israel is not a signatory to the ICC and has said the body lacks jurisdiction. The ICC launched a preliminary examination in 2015 into allegations of war crimes and crimes against humanity in Israel and the Palestinian territories. However, the court has not opened a full investigation that could ultimately lead to indictments."