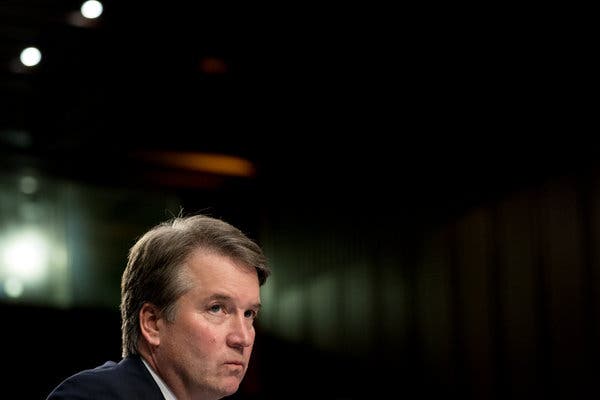 "These accusations don’t paint Brett Kavanaugh as just a cad, but as a lascivious predator.

"And then there were three.

Three women — Christine Blasey Ford, Deborah Ramirez and Julie Swetnick — are now accusing Brett Kavanaugh of sexual misconduct as a teenager and young adult. The allegations include assault, attempted rape and, now, that he and other boys attempted “to cause girls to become inebriated and disoriented so that they could then be ‘gang raped’ in a side room or bedroom by a ‘train’ of numerous boys.”

Swetnick, the latest accuser, described Kavanaugh as a “mean drunk.”

This is explosive, extraordinary stuff.

However, Kavanaugh has categorically denied that any of this ever happened.

I must say that I found his specification of sexual “intercourse” interesting here. First, sexual assault doesn’t require intercourse. Second, one can be sexually intimate — or sexually violated — without intercourse. That struck me as a bit of carefully chosen lawyer-speak.

To be clear, these accusations don’t paint Kavanaugh as just a cad, but as a lascivious predator. If these things are true, not only must he never be seated on the Supreme Court, he must also lose his current judgeship.

According to Kavanaugh’s prepared written testimony for his hearing before the Senate Judiciary Committee on Thursday, he will cede a little ground on bad behavior:

“I spent most of my time in high school focused on academics, sports, church and service. But I was not perfect in those days, just as I am not perfect today. I drank beer with my friends, usually on weekends. Sometimes I had too many. In retrospect, I said and did things in high school that make me cringe now.”

But he still denies sexual misconduct.

Either these women are all lying about Kavanaugh, or he is lying in his denial. But the one thing that is absolutely true here is that someone is lying, and multiple people may be doing so.

This is not a small lie. The direction of the Supreme Court may hinge on it. Republicans are proceeding at a reckless pace because they fear that if Kavanaugh is not confirmed before the midterm elections, the Democrats have a small chance of taking control of the Senate and could then stall President Trump’s nominations or confirm only a more moderate nominee.

Democrats are banking on much the same, but there is also a principled and moral argument, aside from political posturing, to allow all three accusers to testify under oath, to call additional witnesses and to order an investigation by the Federal Bureau of Investigation.

Indeed, at this point, the lying is as consequential as the accusations. Kavanaugh has so categorically denied the accusations, leaving no room whatsoever for the possibility that they are true, that one must assume that he is absolutely convinced of his own innocence, or, instead, that he’s a bona fide psychopath, like the man who nominated him.

The latter is a possibility that we cannot risk, not with the future of the court hanging in the balance.

We must grind this process to a halt until we have exhausted every possible investigative option and every fact has been uncovered.

Not doing so is a dereliction of duty and a betrayal of the country that threatens to further and irreparably damage the integrity of the court.

But of course the members of this Republican Party, strung out on Trumpism, care nothing about duty and patriotism. They care only about appeasing Trump’s base, delivering him a justice who believes in insulating presidents from prosecution and in realizing a decades-old Republican fever dream of achieving a solid conservative majority on the court.

A new NPR/PBS NewsHour/Marist poll found this week that more people now oppose Kavanaugh than support him; more believe Blasey is telling the truth about her encounter at a party with Kavanaugh than believe he is; and 59 percent believe that if Blasey’s sexual assault charge is true, Kavanaugh should not be confirmed.

But it seems that Kavanaugh, Trump and Republicans in the Senate do not want to put in any of the time or work to find that truth. Instead, we’ve been promised a show hearing, a competition of narratives and styles of presentation, a contest of contrivances from which we are expected to judge credibility.

This is a sham, and Republicans should be ashamed. However, one cannot display what one does not possess. This is a brazen attempt to smother truth in order to advance the career of a man who would spend the rest of his life tasked with discerning truth.

They want to anoint a justice by miscarrying justice."