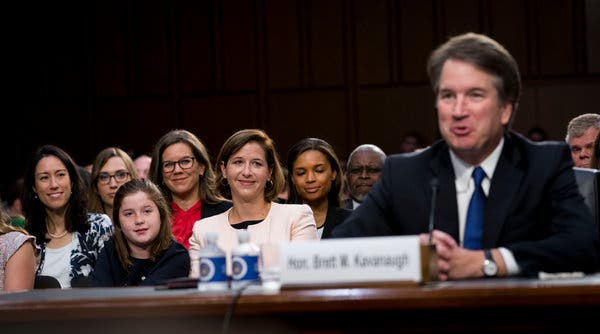 By Charles M. Blow, www.nytimes.com September 5th, 2018
"Brett Kavanaugh knows firsthand that affirmative action works and he uses it to hire female law clerks. But he opposes it as policy.
Judge Brett Kavanaugh got front-row support from his wife, Ashley, and their daughter Liza at his confirmation hearing on Tuesday.
Photo by: Doug Mills/The New York Times
Affirmative action is a thorny issue, an imperfect tool to push society toward more perfect equality. It creates a current preference to counterbalance a historical preference.
In this equation, there will always be winners and losers. Many people who have been long excluded because of race, gender, religion or sexual orientation — approve of this system. People who have long benefited from others being excluded — often white and often male, Christian and heterosexual — may even despise this affirmative action as a form of “reverse discrimination.”
That is why I found an exchange on Wednesday between the Supreme Court nominee Brett Kavanaugh and the Republican senator Orrin Hatch so fascinating.
Hatch pointed out:
A majority of your clerks, in fact, have been women. I understand that you were the first judge in the history of the D.C. Circuit to have an all-female class of clerks. Why do you believe it important to encourage young women lawyers and to ensure that both men and women are well represented in the legal profession?
Kavanaugh’s response was long, but I feel it important to reprint an extended passage of it here:
I came to be a judge in 2006, May 2006. And August 2006, Linda Greenhouse of The New York Times runs a story in The New York Times about the scarcity of women law clerks at the Supreme Court that year. There were seven, I believe, that year out of 37.
She wrote a story about that. And that seemed to me very odd and unacceptable. And I started thinking about what I could do. First of all, why is that happening and what can I do about it? What’s the problem, what can I do?
So, the problem seemed to me these networks that … judges rely on for clerk hirings, professor networks … were excluding women or at least women weren’t fully represented in those. That’s true with minorities as well, by the way.
So, I made sure, when I was talking to professors at law schools, that I made sure that I wanted to see a broad pool of qualified, well-qualified applicants, including women. And that year, for example, fall of 2006, which was my first year on the bench — we hire a year ahead, so I’m hiring for 2007 — and I hired three women for that clerk class, 2007, three out of the four …
And, that was the start of my efforts to make sure that women were not being excluded.
This is the very definition of affirmative action! He is making a concerted effort to include in the applicant pool people who had traditionally been excluded and had apparently taken that fact into consideration when hiring.
Kavanaugh went on to say of his personal program of affirmative action: “I’m very proud of that because I do believe that all people should be treated equally.”
And yet this is the very same Kavanaugh who, when in the Bush White House, coordinated “the administration’s opposition to affirmative action in cases challenging race-conscious admissions policies at the University of Michigan,” as The Wall Street Journal wrote on Tuesday.
Furthermore, The Washington Post reported last month about Kavanaugh’s description in 1999 “of a government program for Native Hawaiians as a ‘naked racial-spoils system.’” They also wrote about a 1999 Wall Street Journal column in which Kavanaugh quoted Justice Antonin Scalia about racial preferences in hiring: ­“Under our Constitution, there can be no such thing as either a creditor or a debtor race. … In the eyes of government, we are just one race here.”
This was all of course before he got married, had two daughters and started coaching girls’ basketball.
This is the kind of illogical social positioning I despise. Kavanaugh knows firsthand that affirmative action works, but he opposes it as policy. He is now deeply interested in female advancement and equality because he has two daughters.
The inconsistency is maddening. And yet Kavanaugh has tried to bring these two warring positions into harmony. As The Journal reported:
“I continue to see no contradiction,” he wrote in March 2003 to a journalist questioning how the White House could boast about minority judicial nominees while fighting affirmative action. “Diversity is a permissible goal but a state must use race-neutral criteria when available,” he added.
Kavanaugh finished this exchange with Hatch on Wednesday by saying, “I appreciate the question, Senator.” Hatch replied: “And I appreciate the answer. And I think everybody in this country should appreciate the answer. And, I think it distinguishes you.”
This is the same Hatch who spearheaded an attack on affirmative action in the early 1980s. As The Christian Science Monitor wrote in 1981:
Programs that give minorities and women preference in jobs and education are facing increasing opposition. President Reagan has rapped what he described as racial ‘quotas’ in some of these ‘affirmative action’ plans. Scholars are debating the value of setting aside opportunities for members of ethnic groups. And this week Sen. Orrin G. Hatch opened hearings on a constitutional amendment to ban government action to favor any race.
And yet here he was gushing over Kavanaugh’s affirmative action clerk program because he no doubt thought that it would somehow blunt the dire warnings about a Kavanaugh confirmation coming from civil rights and women’s rights groups.
Affirmative action isn’t perfect. But the senator is a die-hard opponent of the tactic, while using praise of it as a tool to shield from criticism that is an even greater threat.
Both Kavanaugh and Hatch demonstrated on Wednesday a staggering inconsistency in the service of a diversionary tactic."