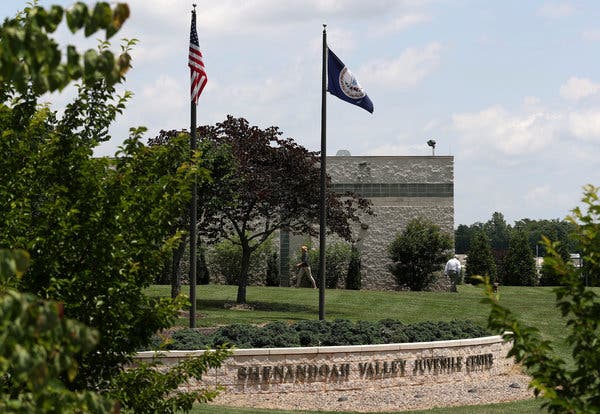 "VERONA, Va. — Guards at a juvenile detention center for troubled immigrant teenagers had many ways of handling serious problems. At times, they resorted to the chair. Other times, the mask.

According to migrant teenagers and a former worker, the high, hard-backed metal chair had wheels so it could be tilted and moved like a dolly through the halls of the Shenandoah Valley Juvenile Center, a northwest Virginia facility that houses American and undocumented migrant youths who have emotional, behavioral and psychological issues.

Teenagers as young as 14 were strapped to the chair — some stripped down to their underwear — with their feet, arms and waist restrained by cushioned leather straps and loops, they said.

Those who guards feared might spit on staff, said one former worker, got the mask — a mesh hood that covered their entire faces and heads. Sometimes, the detainees said, they were forced to wear it while in the chair.

Uses of the chair and mask are among the more extreme examples of complaints that have emerged from inside a handful of detention centers that house teenage migrants with a history of violence, mental health problems or, in some cases, gang affiliation. A few hundred a year are held in this separate network of jail-like facilities that also hold American juveniles who have been sent there for a range of behavioral issues and crimes, including assault and murder.

The centers have tougher security measures than the immigrant-only shelters where the vast majority of the migrant teenagers are sent after entering the country illegally, either on their own or with their families.

For years, the government has sent the most troubled migrant youths to these more restrictive facilities, and many complaints about these sites came well before the Trump administration’s crackdown on illegal immigration. Others, though, have been lodged in the wake of the recent surge of detained immigrant children and teenagers, accusations that include use of the restraint devices, injections of psychotropic drugs and long periods in solitary confinement.

In sworn statements at the center of a class-action lawsuit against the Shenandoah Valley facility and the government commission that receives millions of federal dollars to run it, six former detainees paint a hellish portrait of daily life inside.

“They locked me in a room that was 8x10, or maybe 8x16, for 23 hours a day, all by myself,” said one detainee identified only as R.B. in the suit. Originally from Guatemala and now 18 and living with his mother in Texas, he had a pre-existing mental illness and was transferred to the Shenandoah Valley facility because of “behavioral problems,” according to the lawsuit. He said he often got into fights with other detainees and guards because he felt so isolated and angry over his fate. Punishment was the chair and mask, he said."