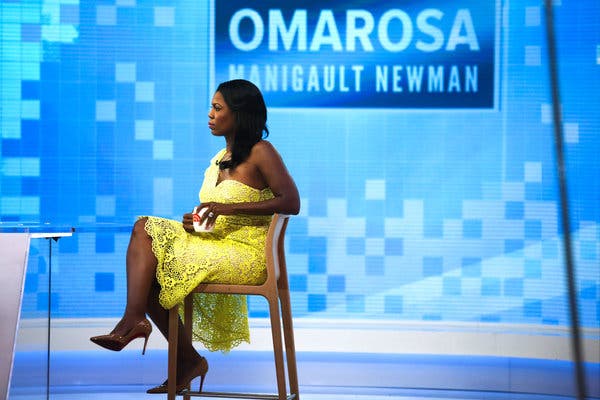 "WASHINGTON — President Trump added his former White House aide, Omarosa Manigault Newman, on Tuesday to the growing list of African-Americans he has publicly denigrated on Twitter, calling her “that dog” and a “crazed, crying lowlife” after her allegations against him of mental deterioration and racism.

Even for a president who consistently uses Twitter to assail his adversaries, the morning tweet about Ms. Manigault Newman was a remarkably crude use of the presidential bully pulpit to disparage a woman who once served at the highest levels in his White House.

In an interview on MSNBC, Ms. Manigault Newman responded that Mr. Trump treats women differently from men because he “believes they are beneath him” and that he talked in derogatory ways about minorities.

“He has absolutely no respect for women, for African-Americans,” she said.

In recent weeks, Mr. Trump has called Don Lemon, a CNN anchor, “the dumbest man on television.” He has questioned the intelligence of LeBron James, a star basketball player for the Los Angeles Lakers. And he has repeatedly said that Representative Maxine Waters, Democrat of California, has a “low I.Q.”

Mr. Trump has also deployed the “dog” insult for white people, including Arianna Huffington, a founder of HuffPost. During the 2016 presidential campaign, Mr. Trump tweeted that a onetime political rival and fellow Republican, Senator Ted Cruz of Texas, “lies like a dog.”

Tuesday morning’s tweet was the latest in what has become an increasingly personal and malicious stream of Twitter posts from Mr. Trump, many of which are responses to his critics or aimed at questioning the integrity of the continuing investigation into Russian interference in the 2016 election and whether Mr. Trump or his aides were complicit in it. In recent days, the president has again used Twitter to lash out at his attorney general, Jeff Sessions, and at an F.B.I. agent who helped oversee the Russia investigation and who was fired for sending texts critical of Mr. Trump.

Mr. Trump’s advisers and allies described the tweet about Ms. Manigault Newman, in particular, as a reaction to the accusations that she makes about the president in “Unhinged,” her tell-all book about her year in the West Wing. Scholars called it an ugly historical echo of the country’s racial divisions.

“It’s important to understand the legacy, the history of the attack on black intelligence as a way of justifying our dehumanization,” said Eddie S. Glaude Jr., the chairman of the African-American studies department at Princeton University. He said there was “something deeply racial” about the way Mr. Trump described Ms. Manigault Newman on Tuesday.

Sarah Huckabee Sanders, the White House press secretary, disputed the idea that Mr. Trump’s tweet about Ms. Manigault Newman was driven by racial animus, and defended the president by pointing out his willingness to lash out at people of all races.

The White House Press Secretary, Sarah Huckabee Sanders, said that President Trump had denied using the racial slur and that he had never used it in her presence.Published OnAug. 15, 2018CreditImage by Doug Mills/The New York Times

She said White House employees would not continue to work with him if they thought he was a racist. “If at any point we felt that the president was who some of his critics claim him to be, we certainly wouldn’t be here,” Ms. Sanders said.

She told reporters they should focus instead on the fact that Mr. Trump created 700,000 jobs for African-Americans in less than two years, far more than the 195,000 jobs for blacks that she said were created during the eight years of the Obama administration.

In fact, Labor Department statistics showed that African-American employment grew by about three million during President Barack Obama’s two terms. Hours after her briefing, Ms. Sanders made a rare apology, tweeting that her numbers were off.

A detailed list of the journalists, politicians and places President Trump has insulted since declaring his candidacy.

“Jobs numbers for Pres Trump and Pres Obama were correct, but the time frame for Pres Obama wasn’t,” she wrote, citing information that she had interpreted incorrectly from the White House Council of Economic Advisers. “I’m sorry for the mistake, but no apologies for the 700,000 jobs for African Americans created under President Trump.”

During a decades-long career in real estate and reality television, Mr. Trump has at times been embraced by African-American celebrities who have vouched for his willingness to look past racial stereotypes. Michael Jackson and Don King, the boxing promoter, at times called Mr. Trump a friend.

Ms. Manigault Newman became a celebrity herself on “The Apprentice,” Mr. Trump’s reality television show. Later, as a top White House aide, she often defended the president against charges of racial bias or xenophobia.

In addition to the tweet praising his chief of staff, John F. Kelly, for “quickly firing that dog,” Mr. Trump also called Ms. Manigault Newman “Wacky and Deranged Omarosa” in another tweet this week. And in yet another, the president said she was hated by other staff members inside the White House and was known to be “vicious, but not smart.”

Linda-Susan Beard, the director of Africana Studies at Bryn Mawr College in Pennsylvania, said there is a long history in the United States of black women being compared to dogs.

“He’s drawing on a history of discourse that is so hate-filled and so historic that it all came together in these 34 words,” she said of Mr. Trump’s tweet about Ms. Manigault Newman, which was actually 35 words. “The statement is brilliant in its ability to do double duty: to offer an attack that is simultaneously racialized and gendered.”

On Tuesday, CBS News released a recording that Ms. Manigault Newman said was of two Trump campaign aides discussing how to react if a tape emerges with Mr. Trump using the N-word. Trump campaign officials had denied that such conversations took place.

A day earlier, NBC released a tape that Ms. Manigault Newman made of her speaking to Mr. Trump, which she said was recorded the day after she was fired. In the recording, the president said he knew nothing about the decision to fire her and told her, “I don’t love you leaving at all.”

Ms. Manigault Newman has said she has more audio recordings, and in an interview on Monday on MSNBC’s “Hardball,” said she would cooperate with Robert S. Mueller III, the special counsel leading the Russia investigation, if asked. “Anything they want, I’ll share,” she said.

The president’s latest attack on Mr. Sessions was packaged with other tweets assailing the Russia investigation, which Mr. Trump regularly calls a “witch hunt.” He said the inquiry never would have started if “we had a real Attorney General,” an apparent reference to the decision by Mr. Sessions to recuse himself in the Russia inquiry.

Mr. Trump’s former campaign chairman, Paul Manafort, is currently on trial, accused of tax and bank fraud crimes. He is the first person to be prosecuted by the special counsel. Mr. Manafort’s lawyers rested on Tuesday without presenting a defense.

Mr. Trump also questioned why the Russia investigation would not end with the firing of the F.B.I. agent, Peter Strzok.

A version of this article appears in print on Aug. 15, 2018, on Page A1 of the New York edition with the headline: Trump Belittles A Female Critic As ‘That Dog’."

Trump Calls Omarosa Manigault Newman ‘That Dog’ in His Latest Insult - The New York Times
Posted by John H Armwood II at 11:24 AM