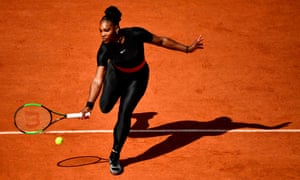 "If Wide Awoke were invited to come up with a list of feminist moments of 2018, Serena Williams in a black catsuit winning her first grand slam match since giving birth would top it. Williams, probably the greatest female tennis player of all time, said the bodysuit she wore on court at this year’s French Open made her feel like “a warrior”, as well as helping her cope with the blood clots that threatened her life when she gave birth. It was fun, it was functional, it was fabulous. It made returning to work from maternity leave look like the stuff of superhero movies, which it basically is. Minus the kudos.

The catsuit has been banned from future French Opens. “I believe we have sometimes gone too far,” said the French Tennis Federation president, Bernard Giudicelli. “Serena’s outfit this year, for example, would no longer be accepted. You have to respect the game and the place.” But how exactly does a full bodysuit go too far? This has nothing to do with respecting the game; in fact it shows deep disrespect to one of its greatest players."

What the ban on Serena Williams’ catsuit says about the sexualising of black women’s bodies | Life and style | The Guardian
Posted by John H Armwood II at 2:02 PM