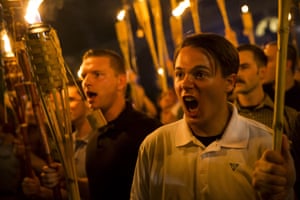 "No one would argue that the last year hasn’t been a rough one for the white nationalist movement in America. In fact, a not insignificant number of column inches has been written about how the movement is all but dead.

The leader of the National Socialist group the Traditionalist Workers party, Matthew Heimbach, has had a disastrous year ever since he was honeypotted into sleeping with his stepfather-in-law’s girlfriend while said stepfather-in-law filmed the whole thing through the window from an apple crate. Heimbach then severely beat his stepfather-in-law, shoved his wife and ended up charged with spousal abuse – and bereft of his political party.

Richard Spencer was compelled to abandon his college speaking tour because of relentless hounding by the antifa as well as lackluster crowds.

Andrew Anglin, founder of thewhite supremacist website the Daily Stormer, found himself the target of a barrage of lawsuits and spent most of the year in hiding.

The Traditionalist Workers party folded, and with it the Nationalist Front, Heimbachs’ big tent coalition of skinheads, neo-Confederates, the Ku Klux Klan and neo-Nazis.

Far-right websites and social media accounts were de-platformed and forced into the online netherworlds of the social network Gab and various Russian hosting services. Paypal, GoFundMe and Patreon, all popular vehicles for white supremacist fundraising, kicked many of their most prominent racist users off their service.

Yet this only tells part of the story – one that has little to do with the relative health of the far right in America.

Whereas pseudo-political street thugs like the former Vice executive Gavin McInnes or the Washington state candidate for US Senate Joey Gibson (both of whom deny affiliations with white supremacists or the “alt-right”) have found public rallies and often violent clashes with counter protesters to be effective sites for recruiting, there is a large crop of nationalist political candidates who have learned to thrive in the shadows of their much louder ideological kinsmen.

These less flamboyant and less entertaining nationalists are riding the coattails of the far right into the political arena and, to mix a metaphor, they are only just now beginning to dip their toes into the electoral pool. In this light, the political movement embodied by Richard Spencer, Mike Enoch and Andrew Anglin isn’t the end goal in itself, but rather the vehicle by which their ideological detritus gets borne into the political bloodstream of America.

“Think about the alt-right as a way to reintroduce political ideas that has been relegated to the fringes back into the mainstream,” Ryan Lenz told me. Lenz is a freelance journalist and former investigator for the Southern Poverty Law Center, an organization that tracks and monitors hate groups in America. “Over time it no longer becomes a third rail for politicians to discuss antisemitic and anti-black ideas. We’re not yet at a point where the political field is swept over by candidates who denigrate classes of people, but in this midterm cycle there are more than a dozen candidates who belong on the far right. Some of them are advocates of horrific ideologies, and who have received relatively little attention for their positions.”

In this way, the Nazis of Charlottesville and their leaders have served as an inoculation, numbing us to candidates and ideas that only a year ago would be completely unacceptable....

A year after Charlottesville, white nationalist views creep into politics | World news | The Guardian
Posted by John H Armwood II at 9:16 AM