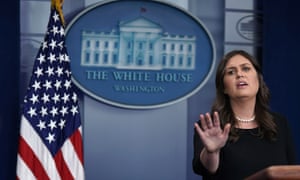 "Republicans are very worried about ‘civility’ these days. They’re mad that Department of Homeland Security Secretary Kirstjen Nielsen was forced to leave a Washington DC restaurant after being confronted by protesters, upset that Stephen Miller was called a fascist when the White House adviser was eating Mexican food, and horrified that press secretary Sarah Sanders was asked to leave a Virginia restaurant by the establishment’s owner. Some young Trump supporters in DC are even down in the dumps that they can’t seem to get a date.

We’re told that the left is being intolerant at best, and at worst - as one Fox News contributor put it - a ‘mob’ that is ‘approaching near anarchy.’

They haven’t seemed to consider the simplest answer: that when you do and defend terrible things, people don’t really want to be around you.

There’s a reason that actor Seth Rogan, for example, declined to take a picture with Paul Ryan recently; or why Florida Attorney General Pam Bondi was met by protesters when she left a showing of the Mr Rodgers documentary. Americans are horrified by what Republicans are doing to this country, and most urgently, what they’re doing to children.

As I wrote soon after the election when the right was inflamed about soon-to-be Vice President Mike Pence getting booed at a Hamilton performance, there’s nothing wrong with being made to feel ashamed for doing something shameful.

Still, it’s not just conservatives who claim that ostracizing Trump-supporters or enablers is ‘uncivil.’ On Sunday, for example, David Axelrod tweeted that he was ‘amazed and appalled by the number of folks on [the] Left who applauded the expulsion of [Sanders] and her family from a restaurant.’ And the editorial board at The Washington Post, says Americans should ‘let the Trump team eat in peace.’

Sign up for Guardian Today US edition: the day's must-reads sent directly to you Read more The recent protests, they wrote, ‘have blurred the line between work hours and private time.’

But when you’re talking about the kind of human rights violations the Trump administration has unabashedly enacted and defended, there is no public/private line worth honoring. When it comes to kids in cages, you’re not just accountable for your actions from 9 to 5.

If you’re responsible for the jailing of Latino toddlers, you do not have the right to enjoy Mexican food free from protest. If you are defending internment camps where children are leaving with bed bug bites, lice and irreparable emotional trauma, you don’t get to have a fun dinner out without servers and restaurant owners taking umbrage. You are not entitled to pose with celebrities, or take in a movie about the power of kindness and neighborly love when you are stripping millions of their health care. And when you support all of the above, no one is going to feel bad for you when you can’t get a date.

One of the foundational parts of building a community is drawing boundaries about what is considered acceptable and unacceptable behavior; it’s normal for people to decide that certain actions have no place in a civil society. What is happening to Republicans right now is just that - community members sending a clear message about what they’re willing to tolerate, and what none of us should have to. There’s nothing more ‘civil’ than that.

Jessica Valenti is a Guardian US columnist Since you’re here… … we have a small favour to ask. More people are reading the Guardian than ever but advertising revenues across the media are falling fast. And unlike many news organisations, we haven’t put up a paywall – we want to keep our journalism as open as we can. So you can see why we need to ask for your help.

The Guardian’s independent, investigative journalism takes a lot of time, money and hard work to produce. With investigative reporting, we often don't know at the beginning how a story will unfold and how long it might take to uncover. This can mean it is costly – particularly as we often face legal threats that attempt to stop our reporting. But we remain committed to raising important questions and exposing wrongdoing. And we do it because we believe our perspective matters – because it might well be your perspective, too.

I appreciate there not being a paywall: it is more democratic for the media to be available for all and not a commodity to be purchased by a few. I’m happy to make a contribution so others with less means still have access to information. Thomasine, Sweden If everyone who reads our reporting, who likes it, helps to support it, our future would be much more secure. For as little as $1, you can support the Guardian – and it only takes a mi"

(Via.). Trump officials don't get to eat dinner in peace – not while kids are in cages | Jessica Valenti | Opinion | The Guardian: