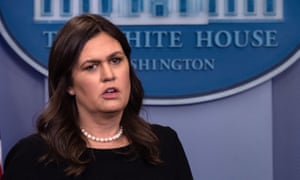 "A tweet by White House press secretary Sarah Sanders about her ejection from a Virginia restaurant on Friday broke federal ethics rules, a leading expert said.

'All I hear is my daughter, crying': a Salvadoran father's plight after separation at border

On Saturday, Sanders posted: “Last night I was told by the owner of Red Hen in Lexington [Virginia] to leave because I work for POTUS and I politely left. Her actions say far more about her than about me. I always do my best to treat people, including those I disagree with, respectfully and will continue to do so.”

Walter Shaub, federal ethics chief under Barack Obama and briefly Donald Trump and now a fierce critic of the administration, responded: “Sanders used her official govt account to condemn a private business for personal reasons … she can lob attacks on her own time but not using her official position.”

The controversy came at the end of a week of fierce debate over a Trump policy which mandated the separation of children from their parents when such families entered the US illegally.

Between April and early June, according to federal statistics, more than 2,300 children were taken. On Wednesday, amidst international condemnation and with even Republican supporters in Congress beginning to waver, Trump signed an executive order nominally – but not conclusively – stopping the practice.

On Saturday, groups of Democrats visited federal facilities, seeking details about how the children will be reunited with their families. The Department of Homeland Security said it knew where all the children were and was working to reunite them.

On Sunday, Trump returned to the attack on Twitter, advocating the end of due process. “We cannot allow all of these people to invade our ountry,” the president wrote. “When somebody comes in, we must immediately, with no Judges or Court Cases, bring them back from where they came. Our system is a mockery to good immigration policy and Law and Order.”

Amidst the controversy over immigration, and mixed messages from the president about congressional efforts at reform, there has been no White House press briefing since Monday. Then, Kirstjen Nielsen, the homeland security secretary, addressed reporters on the separations policy.

Nielsen and policy adviser Stephen Miller both found themselves confronted by protesters in Mexican restaurants in Washington. The Red Hen sits 26 and serves “inspired Shenandoah cuisine” a three-hour drive from DC. Its owner told the Washington Post Sanders was served with a selection of cheeses before she decided, following a consultation with staff members, to ask her to leave the premises.

From El Salvador to the US: handcuffed at the border, separated for months

“I was babbling a little,” Stephanie Wilkinson said, “but I got my point across in a polite and direct fashion. I explained that the restaurant has certain standards that I feel it has to uphold, such as honesty and compassion and cooperation. I said, ‘I’d like to ask you to leave.’”

Sanders, Wilkinson said, replied: “That’s fine. I’ll go.” Others at her table followed. Wilkinson said: “They offered to pay. I said, ‘No. It’s on the house.’”

The owner added: “I would have done the same thing again. We just felt there are moments in time when people need to live their convictions. This appeared to be one.”

The story set off a Twitter battle between Trump supporters and opponents, many on both sides comparing it to a recent supreme court ruling that said the owner of a Colorado cake shop was right to refuse service to a gay couple, based on his religious beliefs.

Sanders’ father, former Arkansas governor Mike Huckabee, waded in, writing: “Bigotry. On the menu at Red Hen Restaurant in Lexington VA. Or you can ask for the ‘Hate Plate’. And appetizers are ‘small plates for small minds’.”

Newt Gingrich, a former Republican House speaker who many blame for US politics’ descent into vitriol and schism in the 1990s, wrote: “The increasing personal nastiness toward people who work for President Trump reflects the left’s understanding that they are losing. Nastiness reflects desperation, not strength. They can’t win the argument so they use nastiness. Sad and dangerous.”

Shaub launched a series of tweets of his own.

“Sarah,” he began. “I know you don’t care even a tiny little bit about the ethics rules, but using your official account for this is a clear violation … It’s the same as if [a Bureau of Alcohol, Tobacco, Firearms and Explosives] agent pulled out his badge when a restaurant tried to throw him/her out.

Slaves knew 'the fearful anguish of broken hearts'. In Trump's America, migrants do too

“Sanders used her official gov[ernmen]t account to condemn a private business for personal reasons. Seeks to coerce business by using her office to get public to pressure it. Violates endorsements ban too.”

The Red Hen found itself at the centre of online efforts to boost or damage its customer reviews, hoax booking calls and differing opinions locally. Amidst a media scrum, Tom Lomax, a local business owner, brought flowers as a show of support.

He called Wilkinson a “force of nature” and “one of the biggest drivers of the downtown” and told the Associated Press: “We support our own here, great little community we have.”

Stephen Russek, a former restaurant owner, said: “You have your political opinions, you don’t throw somebody out of your restaurant. They ought to be shut down.”

Shaub added: “There’s no ethics rule against Sarah Sanders fans being cartoonish hypocrites in defending merchants discriminating against gay people but howling when a merchant rejects a human rights violator based on her involvement in harming babies & children. Ridicule will have to suffice.”