The Post-Kennedy Supreme Court Is Already Here  - The Atlantic 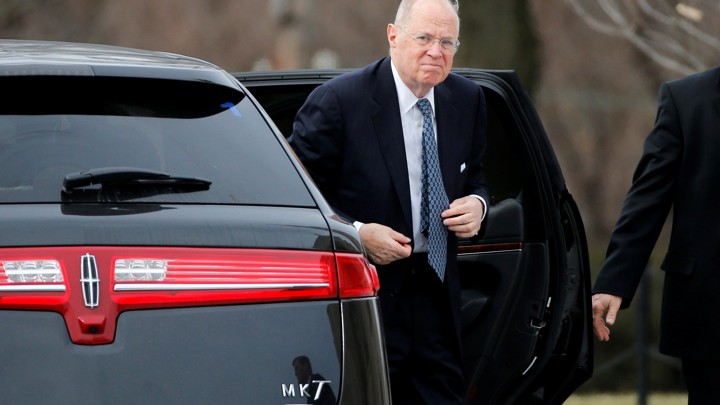 "For those who can’t imagine the Supreme Court without Justice Anthony Kennedy, here’s some faintly good news: you don’t have to.

Though Kennedy’s resignation doesn’t take effect until July 31, the post-Kennedy court first convened on the first Monday in October 2017. The “Justice Kennedy” who sat at the right hand of the Chief Justice for the last nine months was not the Justice Kennedy who defined the court for the past 25 years.

To understand what I mean, consider some statistics assembled by the wizards at SCOTUSblog. In the past term of the court, the court decided 19 of its decisions by 5-4 votes. SCOTUSblog sorts those one-vote results into three categories—cases decided by the five conservatives voting together, which count as “conservative victories”; cases decided by the four liberals and Justice Kennedy, which count as “liberal victories”; and cases decided by scrambled lineups. The first two categories together are the court’s “ideological” cases.

In the 2016-17 term, conservatives won 33 percent of those ideological casts. Between 2005 and 2016, the highest “conservative victory” percentage was 73 percent.

The only times the four liberals picked off a win was in the "mixed cases," in which they won over a justice like Chief Justice Roberts rather than “swing vote” Kennedy. In other words, the tilt to the right has already occurred. And that tilt coincides with a fundamental, historic, and irreversible change in the court itself and its role in American life.

What happened? I have no inside sources, but my own eyes and ears told me during the past term that “Justice Kennedy” was tired. That weariness, I think, accounts for the minimalism of some of his opinions—the fact-bound resolution of Masterpiece Cakeshop, the remands in the two partisan gerrymandering cases, the toothless plea for kindness to President Trump in his separate opinion in the “travel ban” case.

Beyond that, Kennedy, always a conservative, has been moving right since the advent of Barack Obama. That president, and his signature health-care statute, alarmed a lot of old-style conservatives. They regarded Obama as (as Alexander Hamilton described Aaron Burr) an “embryo-Caesar.” America, they sincerely thought, was becoming a collectivist nightmare of big government.

If Kennedy felt that way, it would explain the testy and contemptuous tone that pervaded his bench conduct during Janus v. American Federation of State, County, and Municipal Employees. The case tested the ability of state legislatures to authorize public-sector unions to collect “agency fees” from non-members they are required to represent. At argument in February, this courtliest justice quite uncharacteristically lost his temper with a lawyer defending the state’s “partnership” with unions “It can be a partner with you in advocating for a greater size workforce, against privatization, against merit promotion, against—for teacher tenure, for higher wages, for massive government, for increasing bonded indebtedness, for increasing taxes?” The moment was entirely improper, and revealing.

But Kennedy was not the only changed member of the 2017-18 court. The 2018 model John Roberts may no longer be the imperiously independent John Roberts of former years. Dahlia Lithwick has written persuasively of the systematic campaign from Republican circles on Capitol Hill and the White House to intimidate Roberts. Senate Judiciary Committee Chair Chuck Grassley warned Roberts not to utter a peep during the Merrick Garland controversy; he complied. Donald Trump (who praised the maverick Kennedy) consistently reviled Roberts for his Obamacare vote. “Congratulations to John Roberts for making Americans hate the Supreme Court because of his BS,” Trump tweeted in 2012; during the campaign, he called the chief justice “an absolute nightmare” and “a disaster.” That campaign of intimidation may have worked. Roberts’s opinion in Trump v. Hawaii was not just deferential in tone, it was servile, almost a plea for mercy.

After Scalia’s death, Senate Republicans, with the backing of advocacy groups and billionaire donors, changed forever the rules of judicial appointments. Confronted with a highly qualified, popular, centrist, and conciliatory nominee, they simply refused to allow the vacancy to be filled, and they did so explicitly to politicize the court. From a constitutional point of view, this maneuver was not simply cynical but nihilistic—a direct, conscious attack on the powers of both the executive and the judicial branch.

In 1937, remember, Franklin Roosevelt—at that moment the most popular president of all time—asked Congress for six new appointments to the Supreme Court. That court was reactionary and hateful, but critics in both parties rushed to defend the court’s independence. Democrats had a 50-seat advantage in the Senate; FDR’s bill eventually garnered only 20 votes. After that, “court-packing” was became a third rail in American politics—fatal to anyone who touched it.

On April 7, with the confirmation of Neil Gorsuch, the Republican Party did what Roosevelt could not. For the first time in modern history, a political party packed the court.

Justice Kennedy’s legacy in some areas—like abortion—may prove fleeting; in others—like the First Amendment—it may endure. But here to stay is the sea-change the Republican party has forced onto a once-proud institution. No longer a “check” or “balance,” it is now—and will henceforth be seen by both sides as—simply another lever of power. And on the day the Democrats hold power to alter the makeup of the court by bare-knuckle means, they will do it. And they should.

These are the new rules.

Whoever sits in Kennedy’s seat, the institution will never recover from the wounds to its legitimacy inflicted by its new party masters in the last two years.

Those wounds are not Kennedy’s fault; but they already disfigure the post-Kennedy court."

The Post-Kennedy Supreme Court Is Already Here  - The Atlantic
Posted by John H Armwood II at 10:46 AM