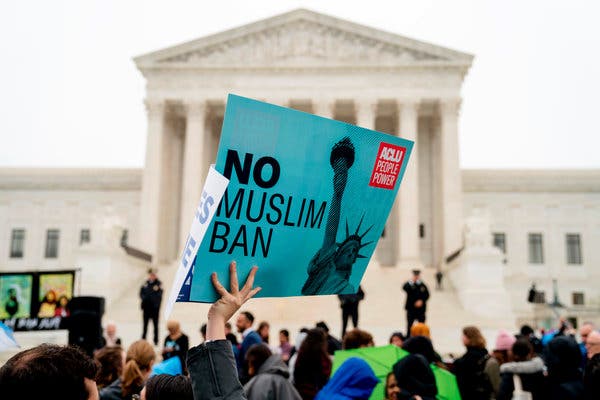 "In a 5-to-4 ruling, the Supreme Court today upheld the president’s executive order for a “travel ban” aimed at several Muslim-majority countries. This decision in the case of Trump v. Hawaii, which comes in spite of Congress’s law banning nationality-based discrimination, defines how far the Trump administration can go to target religion in the name of national security and presidential power.

This ruling may not have come as a surprise to all observers, but in fact it represents a sharp break with another recent decision on anti-Muslim bias, the 2015 E.E.O.C. v. Abercrombie & Fitch Stores case.

On the surface, the two cases seem unrelated except that they both include Muslim plaintiffs. But they deal with very similar issues.

In the Abercrombie case, a Muslim woman, Samantha Elauf, filed an Equal Employment Opportunity Commission claim when Abercrombie & Fitch refused to hire her because of her religious head covering. The E.E.O.C. contended that Abercrombie’s actions violated Title VII of the 1964 Civil Rights Act, which prohibits an employer from refusing to hire an applicant because of her religious practice, unless accommodating the practice would impose an undue hardship on the employer.

Trump v. Hawaii, on the other hand, challenged the president’s executive order to suspend indefinitely the issuance of visas and other immigration benefits to people from five Muslim-majority countries for violating immigration laws and the First Amendment’s establishment clause.

The central issue underlying both cases is the use of intent or motive to infer discrimination. The court’s rare 8-to-1 ruling in favor of the Muslim plaintiff in the Abercrombie case suggests a very different court measuring religious animus than the one today. This was evident in the Trump v. Hawaii oral argument in April.

“This is really easy,” said Justice Antonin Scalia when delivering his pithy opinion for the court in Abercrombie. Though the store tried to argue that its “look policy,” a strict dress code for employees, was neutral, the court suggested that it was a thinly disguised excuse to discriminate against Ms. Elauf. Justice Elena Kagan told the lawyer for Abercrombie, “your neutral policy really doesn’t matter.” The other justices followed suit.

When Abercrombie claimed that the employers did not realize Ms. Elauf’s head scarf was a religious requirement — it could be a fashion statement in violation of the “look policy” — Justice Samuel A. Alito Jr. pointed out, “The reason that she was rejected was because you assumed she was going to” wear a head scarf “every day and the only reason she would do it every day is because she had a religious reason.”

The court saw through the smoke screen Abercrombie was trying to set up and exposed the religious discrimination at the heart of the matter.

Three years later, Justice Scalia has been replaced by Justice Neil Gorsuch and the country has what Justice Kagan has described as an “out-of-the-box kind of president.” Over the course of his term, President Trump issued three iterations of the Muslim ban in three executive orders, all of which were thwarted by lower courts.

As Abercrombie did in 2015, Solicitor General Noel Francisco focused on the apparent “neutrality” of the ban during oral arguments, asserting that “the vast majority of the Muslim world was just fine, but there were problems with a small number of countries.” Neal Katyal, representing the state of Hawaii, responded that the government’s religious animus was apparent to a reasonable observer. Chief Justice John G. Roberts Jr. and Justice Alito, who had vehemently questioned Abercrombie about its religious discrimination, instead obscured the government’s motive in concerns about national security.

Justice Alito, who in Abercrombie was highly critical of the store’s anti-religious intent, argued that the president’s executive order “does not look at all like a Muslim ban.” He also said, “If you looked at the 10 countries with the most Muslims, exactly one, Iran, would be on that list,” as if the government needed to ban all Muslim countries for this to be a Muslim ban. Justice Alito’s approach was in direct contravention to his opinion in Stormans Inc. v. Wiesman in which he condemned as an “ominous sign” the disproportionate burden placed on one religious group (“devout Christians”).

Clearly, the Supreme Court’s approach to measuring religious discrimination has shifted. It could be, as Linda Greenhouse has argued in these pages, that the court has one standard for Christians and another for Muslims. The court’s approach is even at odds with its previous protection of Muslims in Abercrombie and Holt v. Hobbs, a 2015 case in which the court ruled unanimously that a Muslim prisoner was legally entitled to grow a beard.

What else might explain this change? Justice Scalia’s passing is a glaring factor. He was a champion of protecting religion from the state, irrespective of the religion. Justice Gorsuch is not. Also since then, as evidenced by recent policies, xenophobia has reached new heights in the United States, particularly against immigrants and refugees. Mr. Trump has pushed the boundaries of what is acceptable.

Religious animus has rarely been so publicly observed: As a presidential candidate, Mr. Trump called for a “total and complete shutdown of Muslims entering the United States.” One of his advisers has stated that Mr. Trump asked him to create a commission to legally implement a Muslim ban. And the president has posted anti-Muslim statements and videos while in office. Yet unlike in Abercrombie, the court seems unwilling to look at Mr. Trump’s intent to infer discrimination. Instead, the court is allowing the government’s peripheral arguments to sweep Muslim civil rights under the rug."