Opinion | Return of the Blood Libel - The New York Times 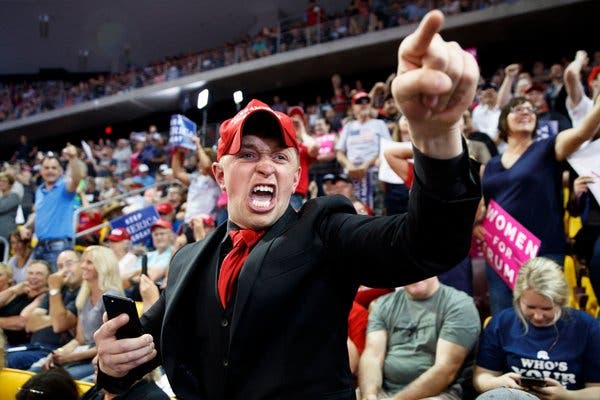 "The speed of America’s moral descent under Donald Trump is breathtaking. In a matter of months we’ve gone from a nation that stood for life, liberty and the pursuit of happiness to a nation that tears children from their parents and puts them in cages.

What’s almost equally remarkable about this plunge into barbarism is that it’s not a response to any actual problem. The mass influx of murderers and rapists that Trump talks about, the wave of crime committed by immigrants here (and, in his mind, refugees in Germany), are things that simply aren’t happening. They’re just sick fantasies being used to justify real atrocities.

And you know what this reminds me of? The history of anti-Semitism, a tale of prejudice fueled by myths and hoaxes that ended in genocide.

First, let’s talk about modern U.S. immigration and how it compares to those sick fantasies.
There is a highly technical debate among economists about whether low-education immigrants exert a depressing effect on the wages of low-education native-born workers (most researchers find that they don’t, but there is some disagreement). This debate, however, is playing no role in Trump policies.

What these policies reflect, instead, is a vision of “American carnage,” of big cities overrun by violent immigrants. And this vision bears no relationship to reality.

For one thing, despite a small uptick since 2014, violent crime in America is actually at historical lows, with the homicide rate back to where it was in the early 1960s. (German crime is also at a historical low, by the way.) Trump’s carnage is a figment of his imagination.

True, if we look across America there is a correlation between violent crime and the prevalence of undocumented immigrants — a negative correlation. That is, places with a lot of immigrants, legal and undocumented, tend to have exceptionally low crime rates. The poster child for this tale of un-carnage is the biggest city of them all: New York, where more than a third of the population is foreign-born, probably including around half a million undocumented immigrants — and crime has fallen to levels not seen since the 1950s.

And this really shouldn’t be surprising, because criminal conviction data show that immigrants, both legal and undocumented, are significantly less likely to commit crimes than the native-born.
So the Trump administration has been terrorizing families and children, abandoning all norms of human decency, in response to a crisis that doesn’t even exist.

Where does this fear and hatred of immigrants come from? A lot of it seems to be fear of the unknown: The most anti-immigrant states seem to be places, like West Virginia, where hardly any immigrants live.
But virulent hatred for immigrants isn’t just a matter of rural rubes. Trump himself is, of course, a wealthy New Yorker, and a lot of the funding for anti-immigrant groups comes from foundations controlled by right-wing billionaires. Why do wealthy, successful people end up hating immigrants? I sometimes find myself thinking about the TV commentator Lou Dobbs, whom I used to know and like in the early 2000s, but who has become a rabid anti-immigrationist (and Trump confidant), and who is currently warning against a pro-immigrant plot by “the Illuminati of K Street.”

I don’t know what drives such people — but we’ve seen this movie before, in the history of anti-Semitism.
The thing about anti-Semitism is that it was never about anything Jews actually did. It was always about lurid myths, often based on deliberate fabrications, that were systematically spread to engender hatred.
For example, for centuries people repeated the “blood libel” — the claim that Jews sacrificed Christian babies as part of the Passover ritual.

In the early part of the 20th century there was wide dissemination of “The Protocols of the Learned Elders of Zion,” a supposed plan for Jewish world domination that was probably forged by the Russian secret police. (History repeats itself, the first time as tragedy, the second time as more tragedy.)

The fake document received wide dissemination in the United States thanks to none other than Henry Ford, a virulent anti-Semite who oversaw the publication and distribution of a half-million copies of an English translation, “The International Jew.” Ford later apologized for publishing a forgery, but the damage was done.

Again, why would someone like Ford — not only wealthy, but also one of the most admired men of his time — have gone down this path? I don’t know, but clearly such things happen.

In any case, the important thing to understand is that the atrocities our nation is now committing at the border don’t represent an overreaction or poorly implemented response to some actual problem that needs solving. There is no immigration crisis; there is no crisis of immigrant crime.

No, the real crisis is an upsurge in hatred — unreasoning hatred that bears no relationship to anything the victims have done. And anyone making excuses for that hatred — who tries, for example, to turn it into a “both sides” story — is, in effect, an apologist for crimes against humanity.

Opinion | Return of the Blood Libel - The New York Times)