Opinion | We Have a Crisis of Democracy, Not Manners - The New York Times 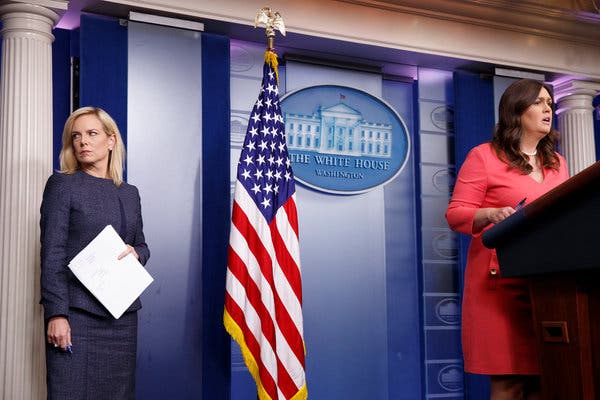 "Last year, the white nationalist Richard Spencer was kicked out of his Virginia gym after another member confronted him and called him a Nazi. This incident did not generate a national round of hand-wringing about the death of tolerance, perhaps because most people tacitly agree that it’s O.K. to shun professional racists.

It’s a little more complicated when the professional racist is the president of the United States. The norms of our political life require a degree of bipartisan forbearance. But treating members of Donald Trump’s administration as ordinary public officials rather than pariahs does more to normalize bigotry than exercising alongside a white separatist.

Over the last week, several Trump administration officials and supporters have been publicly shamed. On Friday night, the Trump press secretary Sarah Huckabee Sanders was asked to leave a farm-to-table restaurant in Lexington, Va. That morning, protesters blasted a recording of sobbing migrant kids outside the home of Kirstjen Nielsen, Trump’s secretary of homeland security.

A few days before that, Nielsen left an upscale Mexican restaurant near the White House after protesters confronted her, chanting, “If kids don’t eat in peace, you don’t eat in peace!” The Trump adviser Stephen Miller was also yelled at in a Mexican restaurant — someone called him a fascist, though he may not regard that as an insult. The same night that Sanders was denied service, Pam Bondi, Florida’s Trump-supporting attorney general, was heckled outside a movie theater where she’d gone to see a documentary about Mister Rogers. Adding to the furor, Representative Maxine Waters, a California Democrat, urged people to keep jeering at members of Trump’s cabinet when they’re out and about, saying, “You tell them they’re not welcome anymore, anywhere.”

Naturally, all this has led to lots of pained disapproval from self-appointed guardians of civility. A Washington Post editorial urged the protesters to think about the precedent they are setting. “How hard is it to imagine, for example, people who strongly believe that abortion is murder deciding that judges or other officials who protect abortion rights should not be able to live peaceably with their families?” it asked.

Of course, this is not hard to imagine at all, since abortion opponents have assassinated abortion providers in their homes and churches, firebombed their clinics and protested at their children’s schools. The Roman Catholic Church has shamed politicians who support abortion rights by denying them communion. The failure to acknowledge this history is a sign of the reflexive false balance that makes it hard for the mainstream media to grapple with the asymmetric extremism of the Republican Party.

I’m somewhat agnostic on the question of whether publicly rebuking Trump collaborators is tactically smart. It stokes their own sense of victimization, which they feed on. It may alienate some persuadable voters, though this is just a guess. (As we saw in the indignant media reaction to Michelle Wolf’s White House Correspondents’ Association Dinner routine, some pundits project their own concern with Beltway decorum onto swing voters, who generally pay less attention to the news than partisans.)

On the other hand, there’s a moral and psychic cost to participating in the fiction that people who work for Trump are in any sense public servants. I don’t blame staff members at the Virginia restaurant, the Red Hen, for not wanting to help Sanders unwind after a hard week of lying to the public about mass child abuse. Particularly when Sanders’s own administration is fighting to let private businesses discriminate against gay people, who, unlike mendacious press secretaries, are a protected class under many civil rights laws.

Whether or not you think public shaming should be happening, it’s important to understand why it’s happening. It’s less a result of a breakdown in civility than a breakdown of democracy. Though it’s tiresome to repeat it, Donald Trump eked out his minority victory with help from a hostile foreign power. He has ruled exclusively for his vengeful supporters, who love the way he terrifies, outrages and humiliates their fellow citizens. Trump installed the right-wing Neil Gorsuch in the Supreme Court seat that Republicans stole from Barack Obama. Gorsuch, in turn, has been the fifth vote in decisions on voter roll purges and, on Monday, racial gerrymandering that will further entrench minority rule.

All over the country, Republican members of Congress have consistently refused to so much as meet with many of the scared, furious citizens they ostensibly represent. A great many of these citizens are working tirelessly to take at least one house of Congress in the midterms — which will require substantially more than 50 percent of total votes, given structural Republican advantages — so that the country’s anti-Trump majority will have some voice in the federal government.

But unless and until that happens, millions and millions of Americans watch helplessly as the president cages children, dehumanizes immigrants, spurns other democracies, guts health care protections, uses his office to enrich himself and turns public life into a deranged phantasmagoria with his incontinent flood of lies. The civility police might point out that many conservatives hated Obama just as much, but that only demonstrates the limits of content-neutral analysis. The right’s revulsion against a black president targeted by birther conspiracy theories is not the same as the left’s revulsion against a racist president who spread birther conspiracy theories.

Faced with the unceasing cruelty and degradation of the Trump presidency, liberals have not taken to marching around in public with assault weapons and threatening civil war. I know of no left-wing publication that has followed the example of the right-wing Federalist and run quasi-pornographic fantasies about murdering political enemies. (“Close your eyes and imagine holding someone’s scalp in your hands,” began a recent Federalist article.) Unlike Trump, no Democratic politician I’m aware of has urged his or her followers to beat up opposing demonstrators.

Instead, some progressive celebrities have said some bad words, and some people have treated administration officials with the sort of public opprobrium due members of any other white nationalist organization. Liberals are using their cultural power against the right because it’s the only power they have left, and people have a desperate need to say, and to hear others say, that what is happening in this country is intolerable.

Sometimes, their strategies may be poorly conceived. But there’s an abusive sort of victim-blaming in demanding that progressives single-handedly uphold civility, lest the right become even more uncivil in response. As long as our rulers wage war on cosmopolitan culture, they shouldn’t feel entitled to its fruits. If they don’t want to hear from the angry citizens they’re supposed to serve, let them eat at Trump Grill."

Opinion | We Have a Crisis of Democracy, Not Manners - The New York Times
Posted by John H Armwood II at 6:43 AM