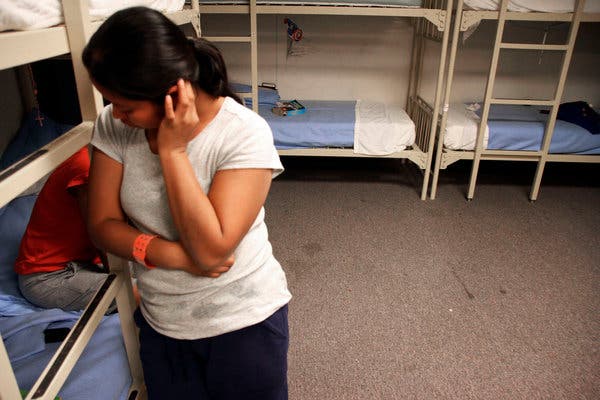 "The author wrote on the condition of anonymity because of the gang-related threats she and her family face in the United States and in El Salvador.

I came to this country from El Salvador in 2014 seeking safety for myself and my son. Instead, I found myself locked in a family immigration detention center. It’s an experience that I wouldn’t wish on anyone.

When I heard news stories of nearly 3,000 children separated from their parents at the border, my heart broke for them. Now President Trump claims to have ended the separation of families, instead placing parents and their children in family detention — jails like the one my son, who was 6 at the time, and I were in. This is not a solution. It just exchanges one form of trauma for another.

I was forced to flee my country because of violence and threats of violence against me and my family. When I was a teenager, my father and I witnessed a murder by local gang members. In 2005, my father was murdered for having testified. The gangs threatened me as well, but since the murder case got dropped, I was able to continue my life and found a job in law enforcement. However, several years later, they threatened to kill me too. That’s when I decided I had to leave and bring my son and my 16-year-old sister with me. If we had stayed, they could’ve killed us all.

El Salvador has one of the worst murder rates in the world, so I knew the threat was serious. I needed to find a safe place for my sister, my son and myself. Our only option was to flee to a country where we couldn’t be found as easily — the United States. But after we crossed the border, we found no relief. Instead, we were held for two months in a family immigration detention center in Artesia, N.M., run by a for-profit company.

The day-to-day conditions were horrible. The food was often expired, the milk was spoiled, and we weren’t provided with snacks for our children between meals. When we saved food for snacks, it was taken from us and thrown out because of concerns about rats in the dorms. Children went to bed hungry. And we could get water between meals only by asking the officers. Sometimes they wouldn’t bring any. The water we did have made us sick.

It was no place for human beings, let alone for families with small children.

When our children were sick, we waited days for medical attention. When one mother whose daughter had asthma informed the officers that her child needed medical care, she was told that she should have thought about that before she came to the United States. Another mother asked for medical assistance for her son but it never came. She was deported, and her son died just a few months later.

We weren’t allowed to sleep in the same beds as our children, even the youngest ones who wanted to sleep with their mothers to feel safe. Deportations usually happened in the middle of the night, with flashlights pointed in our faces to wake us up.

Most of the officers didn’t speak Spanish, which made it hard to communicate. Things were even worse for the indigenous women among us who spoke only their native languages. Once, officers physically forced an indigenous woman to take a shower while she was menstruating, violating both her privacy and her cultural beliefs. As a woman, witnessing this type of treatment was heartbreaking — and it has stayed with me in the years since.

Until we joined together to demand it, there was no legal assistance available to inform of us our rights or guide us through the asylum process. Many women were deported before seeing a judge because they were pressured by officers to sign deportation papers.

The effect on our children was undeniable.

The younger children were very confused about why they were trapped inside. The stories they acted out when they were playing always recreated the dangerous journey they had just gone through to get here. The characters in their games became coyotes (smugglers who help people cross the border), “la migra” (border patrol agents) and immigration judges. The detention center became their entire world. The ones who were old enough to understand what was happening had trouble coping, and I heard of teenagers who tried to take their own lives.

My son, who is now 10 years old, rarely talks about the experience, so it’s hard to know how deeply it has affected him. But since his father was detained by ICE recently, he is starting to remember — and worry. He constantly asks me whether his father is being treated the way we were treated. I struggle to answer that question, because I remember what we went through.

My teenage sister also suffered in detention. She was already affected by the situation in El Salvador and the death of our father, but being inside the detention center affected her even more. Not being able to feel free and being treated like less than human caused her a deep depression, and to this day, she needs constant psychiatric support.

Other children I know from the detention center are clearly traumatized, afraid of police officers and constantly worried about going back. They remember it for what it was: a prison.

After widespread outrage against the separation of families under his “zero tolerance” policy, Mr. Trump signed an executive order directing his administration to keep families in immigration detention indefinitely. That’s not a solution, that’s a jail sentence.

Those of us who have been in family detention can’t stay silent knowing that so many more families will have to go through what we went through. The Trump administration should stop prosecuting parents who have only committed a misdemeanor by crossing the border. It should stop putting them and their children behind bars in places that are often run by for-profit prison companies. It doesn’t make sense to cruelly punish migrants seeking asylum for attempting to do what all parents do — protect and keep their children safe. People fleeing dangerous situations should be given an opportunity to find safety in the United States.

My asylum case is still in process and my children and I are just waiting for the final court date. Being granted asylum can’t take away the fear I still have. My mother is still in El Salvador, and I will never be able to go back. At least now, we are in a place where my son is safe and well taken care of. But I’ll never forget those two months in family detention when he was not."

Opinion | What My 6-Year-Old Son and I Endured in Family Detention - The New York Times
Posted by John H Armwood II at 6:47 AM