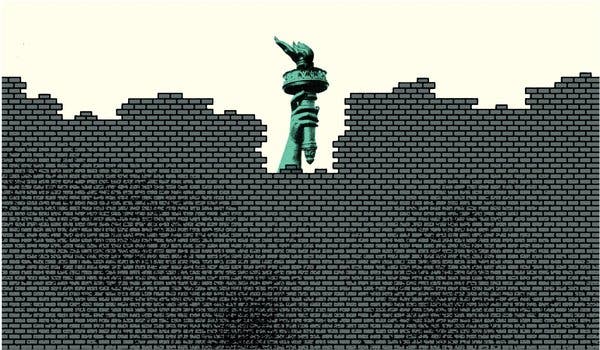 "On Tuesday morning the five conservative justices of the Supreme Court — including the one who got the job only because Senate Republicans stole a seat and held it open for him — voted to uphold President Trump’s travel ban, which indefinitely bars most people from five majority-Muslim countries, and certain citizens from two other countries, from entering the United States.

The conservatives said the ban, Mr. Trump’s third version after the first two were struck down by lower federal courts, was a lawful exercise of presidential authority. They reached this conclusion despite Mr. Trump’s best efforts to convince them, and the country, that its real purpose was to discriminate on the basis of religion.

Remember his call for a “total and complete shutdown of Muslims entering the United States”? That came in December 2015, when he was still a candidate. But the sentiments didn’t stop when he became president. In June 2017, he called the second version of the ban a “watered-down, politically correct version” of the first one, previously saying he would prefer to “go all the way” with the original, which referred to “violent ideologies” and gave priority to Christian refugees from Muslim-majority countries. In September, he said the ban “should be far larger, tougher and more specific — but stupidly, that would not be politically correct!” Two months later he retweeted misleading anti-Muslim videos from a far-right British nationalist group. (And don’t forget that the language about a “total and complete shutdown of Muslims entering the United States” remained on his campaign website until months after he took office.)

All this looks a lot like a government official acting on religious animus, which is barred by the First Amendment and which, one would think, would especially offend the conservative justices. It was just a few weeks ago that the same justices ruled in favor of a Christian baker who had refused to bake a cake for a gay couple’s wedding, on the ground that a state civil-rights commissioner had violated the baker’s First Amendment rights by expressing animus toward his religious beliefs.

The conservative justices surely believed then that, as Justice Sonia Sotomayor wrote in her dissent from the travel ban decision, “Our Constitution demands, and our country deserves, a Judiciary willing to hold the coordinate branches to account when they defy our most sacred legal commitments.” But the principle failed to carry over into Tuesday’s ruling, even though the government actor was not a state commissioner but the president, and the target of his remarks was not a single shopkeeper but millions of Muslims around the world.

Instead, the justices in the majority upheld the travel ban because, they said, presidents have ample legal authority to make national security judgments in the area of immigration. That’s true, but the ban does nothing to make America safer than do the aggressive laws Congress has already passed to manage threats to the nation’s security. Those laws help explain why no one from any of the countries included in the ban — Iran, Libya, Syria, Yemen, Somalia, Venezuela and North Korea — has been involved in a fatal terrorist attack in the United States in the past two decades. The travel ban may have the effect of making the country less safe, according to many national security experts.

The conservative majority’s endorsement of nearly unchecked presidential power in this context is all the more disturbing given this administration’s policies at America’s southern border, which include separating children from their parents and prosecuting those trying to come here from brutally violent countries in Central America.

It’s no small paradox that the justices chose Tuesday’s ruling to formally overturn, at long last, one of the greatest abominations in the court’s history, Korematsu v. United States, the 1944 decision that upheld President Franklin Roosevelt’s order to lock up thousands of Japanese-Americans for years based on nothing but their ancestry — and based on a fabricated claim that our national security demanded it. The Korematsu ruling was “morally repugnant,” the court said, and was “gravely wrong the day it was decided.” That’s surely correct. It’s also easy to say from a distance of 74 years, protected by the warm embrace of history’s consensus. It’s much more important to say it in the moment — as Justice Robert Jackson did in his dissent from the Korematsu decision, which he warned was “a far more subtle blow to liberty than the promulgation of the order itself.”

So what can be said in this moment? Perhaps this — that Mr. Trump’s travel ban is of a piece with the man himself. We may not be able to look into the president’s soul, but we can look at his words and actions over the last half century:

Mr. Trump and his father settled a lawsuit brought against them by the Justice Department for refusing to rent apartments to black people in the 1970s.

He bought a full-page ad in this newspaper and others calling for the death penalty for five young black and Latino men who were convicted of raping a white woman in Central Park in 1989, and refused to admit error even after the men were proved innocent and set free years later.

He demanded the nation’s first black president provide documentary proof he was born in the United States.

He gleefully repeated on the campaign trail, and at rallies after becoming president, a fake story about an American military general slaughtering Muslims with bullets dipped in pigs’ blood.

He defended a march in Charlottesville, Va., led by neo-Nazis and white supremacists in support of a statue of the Confederate general Robert E. Lee, saying that the march also included “very fine people.”

White racial fear has always been at the core of Mr. Trump’s worldview. What’s so dangerous about Tuesday’s ruling is that the Supreme Court has now implicitly blessed his use of this strategy as a political organizing tool and as a governing philosophy.

On Jan. 27, 2017, as Mr. Trump signed the first version of the travel ban, he read out its official title, “Protecting the Nation From Foreign Terrorist Entry Into the United States,” then looked up and said, “We all know what that means.”

Indeed we do, even if five Supreme Court justices refuse to admit it."

Opinion | Bigoted and Feckless, the Travel Ban Is Pure Trump - The New York Times
Posted by John H Armwood II at 9:01 AM