Opinion | The King and Queen of Cruelty - The New York Times 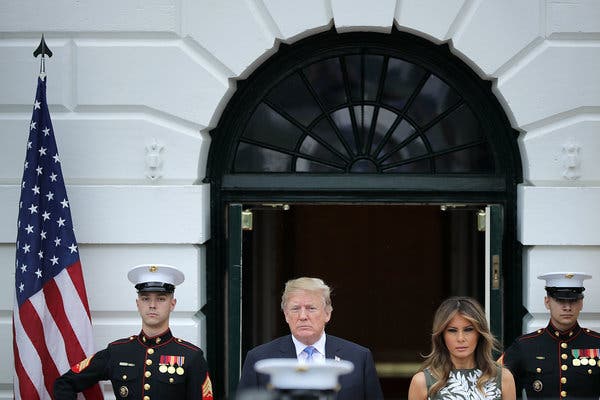 "You just can’t construct prisons for babies. You can’t rip children from mothers and fathers. You can’t use the power of the American government to institute and oversee a program of state-sponsored child abuse. You can’t have a system where the process and possibility of reunification is murky and maybe futile.

You can’t do any of that and assume that decent people won’t rise up in revolt.

Donald Trump learned that this week as an avalanche of indignation came down on him and his administration for his brutal, inhumane “zero tolerance” policy at the border, which was resulting in the terrible suffering of children and their parents.

This is an immoral act of an immoral man, one who saw absolutely no flaw in using the anguish of children and families — people he viewed as deficient and less-than, “not their best” — as pawns in a political fight to force Congress to fund his ridiculous hate symbol: a border wall between the U.S. and Mexico.

He clearly didn’t even think that this was a losing battle for him. He thought using border agents to abduct these children was a winning idea.

On Wednesday, The Associated Press reported: “President Donald Trump sees his hard-line immigration stance as a winning issue heading into a midterm election he views as a referendum on his protectionist policies.”

A Republican member of Congress told CNN that Trump said on Tuesday during a closed-door meeting that “the crying babies doesn’t look good politically.”

Indeed, a CNN poll conducted by SSRS and released Monday found although two-thirds of Americans overall opposed the policy, a majority of Republicans supported it.

Think about that for a second. That to me goes beyond standard political tribalism. That ventures into the territory that the Tennessee Republican senator Bob Corker described last week: This is cultlike.

Trump’s grip on the throat of the Republican Party is so strong that it no longer has breath or voice for objection.

As goes Trump, so goes it.

The contradiction is abominable.

It’s not that Trump and his family don’t understand the downside of imposing even the smallest amount of stress on children. It’s just that they value different children in differing degrees.

Melania Trump clearly thought that it was too traumatic to move the couple’s young son to Washington during the school year, so she stayed with him in New York, costing taxpayers tens of millions of dollars for security.

As Ms. Trump told Us Weekly in January 2016 about talking to the couple’s son about potentially moving to Washington:

“At that age, it’s hard to explain to them. … I tell him: Take it day by day, enjoy your life, live your meaningful life as I like to do. … Of course, at that age, every child would worry, especially if they love school, if they love friends; they don’t want to lose that. Everything is a new opportunity and it brings new friends and a new school. You never know, you never know what happens. Enjoy it day by day, live your life and don’t stress yourself.”

No, please don’t stress yourself. Stress is for poor people, like immigrants.

Even though, as The New York Times reported, sparing their son from the stress of changing schools and moving from a luxury Manhattan apartment to one of the most famous and important residences in the world cost the New York Police Department an estimated $127,000 to $146,000 a day “to protect the first lady and her son while they reside in Trump Tower.”

Yes, she made an unusual step in publicly condemning the family separation policy, but she did so using her husband’s false “both sides of the aisle” talking point. That was a lie. The president alone started this and had the power to end it.

Then she tweeted this tone-deaf, Marie Antoinette-ish statement, as her husband was still separating children from their parents and sending them to internment camps:

“A great visit with the King & Queen of Spain at the @WhiteHouse today. Queen Letizia & I enjoyed tea & time together focusing on the ways we can positively impact children.”

Now some people are reporting that she quietly pressured her husband behind the scenes to reverse the policy.

Is she or her husband going to visit the child internment camps he created, to see what they wrought and console the crying children there? Is either going to work tirelessly for the swift reunification of every single family that has been torn apart? Will either publicly apologize to the families who were damaged?

Until then, I give her no laurels. Donald and Melania are a team in this terror. They have worked together to make the abhorrent normal. They deserve each other; we deserve better."

Opinion | The King and Queen of Cruelty - The New York Times
Posted by John H Armwood II at 6:55 AM